BANKING IN THE CAPE (with Stephen Phelps)

Former ABSA director Bob Aldworth is due to appear in court for his allegedly improper involvement in deals that resulted in losses to the banking group of which he was a director. Now it emerges that, in a case which has received far less publicity, well-known director of Cape Investment Bank, Stephen Phelps, did some unfortunate milion-rand deals with that bank while on its board. 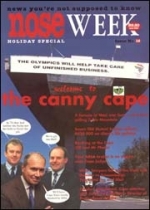 WHEN THE ACCUSED BECOMES THE JUDGE
Shortly after Susan Aird, a partner at Kritzinger & Co, attorneys of Cape Town, ...
BANKING IN THE CAPE (with Stephen Phelps)
Former ABSA director Bob Aldworth is due to appear in court for his allegedly improper ...
MRS DURR vs ABSA
Between May 1990 and November 1992, Valerie Durr purchased preference shares and secured debentures in ...
YOUR BROKER: A SKILLED FINANCIAL ADVISOR - OR JUST ANOTHER SALESMAN?
The implication of a recent judgement in the Cape Supreme Court (see next story) seems ...
FAMILY LOSES INHERITANCE AS OLD MUTUAL’S SUPER-SALESMAN SCORES!
Brian Zolty, the son-in-law of Simon and Miriam Silke, happened to see over the shoulder ...
WHEN LAWYERS FALL OUT
“You will come off second best in any conflict which you get into with Sonnenbergs,” ...
TABLE MOUNTAIN FOR SALE?
The charming folk behind the plan to build on and sell off bits of Table ...
EDITORIAL
Why is the new government so determined to look the other way, and do nothing ...
Dear Editor
Olympics go for cover The statements by Olympic Bid Company chief executive, Chris Ball, that billions ...