'Slabbert: Man on a mission' by Albert Grundlingh (Jonathan Ball)

A man of honesty, resolution and character

Albert Grundlingh’s laudatory but enjoyable biography provides a timely reminder of the considerable role Frederick van Zyl Slabbert played on the South African political stage in the 1970’s and 80’s, when his main mission was to broaden democracy and facilitate negotiations between white South Africans – the Afrikaners in particular – and black South Africans, the exiled ANC in particular.

Slabbert and his twin sister, Marcia, were conceived by a young unmarried couple in 1939. Petrus and Barbara engaged in what Slabbert has described as an indiscriminate night of passion and the two were born on 2 March 1940. Petrus, aged 22, enlisted and barely a week before the twins were born was sent off to fight in the Second World War leaving his two children in the care of their 19-year-old mother who, on occasion, drank too much. After the war, Petrus returned to Pretoria and secured employment in the civil service. Petrus and Barbara were married some years after the twins were born but divorced soon afterwards. Barbara came to despise her former husband. At the insistence of her father she gave custody of her children to their grandfather who then sent them off to live with their aunt and uncle in Linden, Johannesburg. For high school they returned to Pretoria, where any social awkwardness occasioned by his unstable family and their political allegiance – they were United Party supporters – was overcome by his skill at rugby and his good looks. Slabbert started his university studies at Wits University. After a year there, he moved to Stellenbosch where he had hoped to study to become a dominee. He eventually abandoned the idea and turned to sociology instead. Having graduated with distinction in 1963 and with a PhD in 1967 he started an academic career which took him to Rhodes in Grahamstown and then to Wits in Johannesburg. 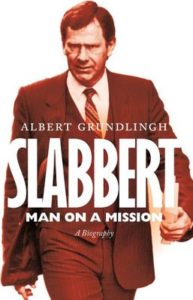 In the early 1970's the Progressive Party, in an attempt to broaden its support base, sought the backing of prominent Afrikaners and Slabbert was recruited and agreed to be the party candidate in Rondebosch in the 1974 general election. He won with a majority of 1568 votes. Gerald Shaw wrote in the Cape Times that Slabbert was a young Afrikaner of unusual intellectual brilliance who never puts a political foot wrong and answers trick questions like a seasoned campaigner. He comes across, wrote Sh

aw, as a man of honesty, resolution and strength of character. He is the most remarkable newcomer in politics for some considerable time.

As an academic turned politician, Slabbert brought unusual intellectual rigour to Parliament when elected in 1974 and transformed the modest Progressive Party into a force that challen

ged the National Party government. As Eglin faltered over an issue involving foreign affairs it became clear Slabbert was his obvious successor – which came about at a party executive meeting held in July 1979. Slabbert became the youngest official leader of the opposition in the history of the South African Parliament. He shone in this role and quickly became popular in the Press and in opposition circles. After cementing his position locally it became clear he had to widen his horizons and he met with leaders of the ANC in Lusaka in October 1985. He was duly impressed with Thabo Mbeki and other high ranking members of their executive, coming to the conclusion they were leaders of substance.

He soon realised he could not achieve his objectives by remaining in Parliament. Disillusioned by the paralysis of formal white politics, and by the growing polarisation of South African society – and to the consternation and disappointment of all, myself included – he resigned at the end of the ‘no-confidence debate’ in February 1986 causing upheaval in the ranks of the Progressive Federal Party. Slabbert’s purpose was to explore democratic alternatives to the impasse into which the country had been led under apartheid. Eglin was re-elected leader but the party had been dealt a mortal blow and soon went into decline. To pursue his objective of broadening democracy Slabbert established IDASA – the Institute for a Democratic Alternative for South Africa – which led to the group of leading Afrikaners that travelled to Dakar in 1987 to meet the exiled ANC. Many saw the trek as a breakthrough, while others felt he had been taken in, yet his reputation – for honesty, integrity, wit and courage – still towers above many of his contemporaries. Slabbert was always different. A worthwhile read.

F Van Zyl Slabbert was a member of Noseweek’s board of directors for many years and helped secure funding for its first major expansion. – Ed.

Joburg's latest celebrity crook
You’ve met Brett Kebble and Glenn Agliotti and Radovan Krejcir on these pages. Now meet ...
Time bomb
“The guaranteed shelf life for shells and pyrotechnics is 10 years and for small ...
Kwasizabantu and News24
Was it a rape ridden cult or simply a rape by the media? Did News24 editor-in-chief ...
SA cashes in on Yemen civil war
The world's biggest humanitarian disaster is proving lucrative   ...
Life savings lost to crypto fraud?
Said to have been executed by a KZN fraudster on the laptop of an unwitting ...
Dear Editor
Noseweek Fundraiser Before we start, a special thank you to the anonymous donor who for the ...
Dear Readers
Banking on the power of prayer This from the editorial in nose236, June 2019 (since then ...
An ultimate caesura
In memoriam: Poet, cartoonist, pharmacist Gus Ferguson (1940–2020) ...
Clipping those vultures' wings
I’ve told you before and now I am going to tell you again. Please, ...
'Slabbert: Man on a mission' by Albert Grundlingh (Jonathan Ball)
A man of honesty, resolution and character Albert Grundlingh’s laudatory but enjoyable biography provides a timely ...
So close and yet so far
Who would have thought that power outages on the East Rand would bring the ...
UPDATE:Fishrot whistleblower tells all
A Namibian lawyer who has been in hiding in South Africa since the beginning ...
A troll by any other name
UCT Prof Lesley Green continues her investigation of the Facebook trolls set up to ...
Should you take Ivermectin for Covid?
Probably, but maybe not. Israeli mini-trial and analysis of available evidence finds Ivermectin appears to work, ...
Texas feeze-up: How the Bush family turned off the lights
Last month an arctic storm swept south into Texas. The state’s entire unprotected electricity ...
The Dark Psychology of Social Networks
Why it feels like everything is going haywire, thanks to Facebook and Twitter ...
Classified ads #250 March/April 2021
HOLIDAY ACCOMMODATION Kingswood Golf Course Stay and play at luxurious self-catering accommodation in George, 2 bedrooms ...
DEFAMATION SUIT BROUGHT BY ENS ATTORNEY LEONARD KATZ
NOSEWEEK AND EDITOR ORDERED TO PAY R330 000 DAMAGES PLUS COSTS IN DEFAMATION SUIT BROUGHT BY ENS ...
Subscription cancellation and Refund Policy
Last updated: June 11, 2021 Thank you for subscribing to Noseweek Online. If, for any reason, You ...