Last Round: The magic lamp

Samson used to arrive at my gate after dark, drunk and belligerent. “Veevjaan!” he shouted, “Maak oop!” The bastard, I’d told him a hundred times to go and sleep under the bridge with the other hobos. “Veevjaaan ... Veevjaan!!!!” he bellowed. I unlocked the gate as quickly and quietly as possible. The ordeal was just over quicker that way. “Shut up, Samson, you’ll wake my sister...”

I used to marvel how it could take him 45 minutes to travel the 50m from the shed to the back stoep where his 1-slice and morning coffee awaited him, cold by now, with the dogs eyeing the bread greedily.

Part of the problem was that his Air BnB had no electricity and he had glaucoma. Throw some cheap brandy into the mix and you hear him knocking around the corrugated iron walls of the shed for up to an hour. “Boing! Boing! Ding-a-ling! Crash!” My sister called this performance ‘the Pinball Wizard.’

Samson used candles as light. There is nothing wrong with candles. I like candles. They are cheaper than battery operated devices and Samson was used to them; it is what they used while he was growing up in Heilbron, on the farm in the Free-State.

But watching him wrestle the matches out of the box with his arthritic hand and lighting the candle stubs in a hit-and-miss game could become excruciating, especially when you are late for a date or a meeting. There was also the real concern that the Pinball Wizard could set the whole place alight. 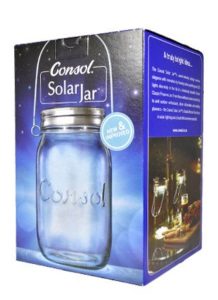 Then I discovered Consol solar powered jars. It’s those same glass jars my mom used to store home-made mulberry jam in. They look like dinkum lanterns from back-in-the-day. Gorgeous, iconic items. And they work like a bomb. It has a simple lever to switch it on and off and you recharge it by leaving it in the sun.

I forced one on Samson one night when the evening pinball got out of hand. I wrapped my hand around his rheumatic claw and showed him how to switch the thing on and off. He took to it instantly, disappearing into the shed, switching the lamp on and off, without so much as a ‘thank you’ or ‘that took you long enough.”

The next morning, he wanted to know how this magic light-storing jar worked, as he could not see the batteries. I tried to explain that it was solar powered. The conversation was a bit more engaging in Afrikaans, but it went like this:
“What, Veevjaan? You catch a bit of sun every day and you keep it inside here?” he asked. “Yes, basically,” I replied. He looked at me quizzically, even suspiciously. “When did you learn how to do this? When did you go to the sun to learn this?” I say I did not go to the sun myself, I learned this from other people. It seemed to make sense to him that I could not possibly have figured it out by myself, so he added to my education. “Did you know, the sun is they eye of God. It shines on everything. It sees everything, even when there are clouds.

There is nothing you can do in the daytime that God cannot see, because the sun shines on everything. Did you know that?” I reply that I did not know that and challenged him:” So I can basically do what I want at night, can’t I? Because then God is blind?”

Samson shook his head, dipped his bread into his coffee and slurped: “No, because the moon is God’s ear. At night, he can hear everything.”

That conversation comforted me. Now I know there will be no rest for the wicked, because ‘The Nose’ not only sees and hears, it can smell fraud as well. From a mile away.