FACIAL FUR (AND OTHER WORRYING FEATURES) 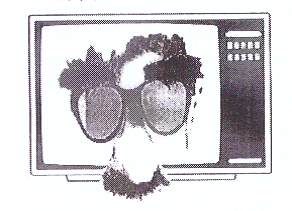 I’ve always argued, perhaps wistfully, that looks, age and appearance don’t count. A more realistic approach would have been that such things shouldn’t count. But, of course they do. Smartly dressed people command more respect than those in drab. Young people get jobs more easily than the elderly. Handsome boys and pretty girls do better in life – through the boardroom and eventually to comfortable bank accounts in the Channel Islands. And when they, like chimneysweeps must, come to dust – it will be a prettier, more sweetly scented dust than most of us will make.

So while arguments in defence of the poor, the ancient and the ugly, might often be moral, they aren’t always sound. Air hostesses and stewards needn’t be beauties but they shouldn’t be fat or anti-social. Sloppy dressers do sometimes indicate sloppy minds and, don’t we know it, younger people have more energy and quicker reflexes than their elders, which makes them better equipped for certain jobs.

Television, especially in the news service, makes greater demands of appearance than most media. While raving beauty should not be a criterion for employment, meticulous grooming, careful makeup and unobtrusive clothing must be.

That is why I take exception to John Bishop’s moustache. I defend his right to grow mushrooms on his face if he feels like it, but then he should find another job. His facial fur is both a distraction and an irritation to watchers. I mean, do we really want to hear the news from Groucho Marx?

If newsreaders are allowed to change their looks so drastically on a personal whim, where will the line be drawn? Can he dye that moustache green and still read the news? Can he shave off his hair, wear an earring, appear topless? At what point does freedom of the employee’s choice end, and the freedom of the employer/viewer to choose begin?

In public statements following the unveiling of his appendage, the usually somnolent Bishop seemed quite perky as he revelled in the publicity his appearance aroused. His attitude towards his big moustache casts some serious doubts about the size of some of his other bits and pieces.

And let’s face it Marietta Kruger has a freckled cleavage. Instead of slapping a bit of makeup on it, or wearing a higher collar, she persists in wearing clothes with low necklines. The first time I spotted the patch, I spent the entire news bulletin totally distracted; squinting at the screen, trying to see if it was the poor woman or the screen which had broken out in spots.

Why don’t some of the clothing people listed under “Marietta Kruger dressed by…” – all of whom get a disproportionate amount of advertising from news bulletins – see that she wears something to cover up her freckled parts? Fortunately the onset of winter shows signs of a cover up and temporary relief for frecklephobes.

Of course, distractions such as these, and the tacky clothing sported by the badly groomed female news journalists employed by TV1 might just be part of a cunning plot by the SABC to take our minds off the content of their still-biased news reporting. An example of their clever editing was the extract they selected from a Bishop of quite another colour. Anyone seeing the extract of Bishop Tutu’s speech at Chris Hani’s funeral which was shown in the evening on TV1’s news bulletins, would be forgiven for seeing him as a capering rabble-rouser. Only those who watched the whole funeral on CCV earlier in the day would have known this to be untrue and unfair. The Bishop’s speech, heard in its entirety, was moving, reverent and profound.

In fact the only thing that jarred at the memorial service to a remarkable man was City Funerals’ omnipresent logo – but then who can blame a funeral parlour for learning the art of inappropriate advertising from the masters at SA TV?

What a pity they didn’t screen the entire deliberations of the committee that selected the new SABC Board, as would have been done in America, instead of edited bits. It would have been fun to watch some of those who volunteered for the job during their round in the ring with our judicial Mohammed Ali.

On the new Board one must reserve judgement, save to note that Mr Wynand Harmse’s enthusiastic congratulations and patent relief at the Board’s acceptance of their appointment must, at lease to some appointees, have looked uncomfortably like a kiss of death.

NOSING ABOUT THE ARTS WORLD
The new SA Arts Board has many Chiefs, one Indian, and that fellow from Nedbank. ...
UK CLASSIC MEETS SA CLASSIC (and nearly dies)
Philippe le Roux, OBE, former NUSAS vice-president and SA political detainee, took over the famous ...
HOW NORM TRIED TO SEND R1,8M TO POOR ROSEMARY IN TEXAS
It’s no great surprise that Norman Benjamin wanted to send some cash to his daughter, ...
NOSING INTO POLITICS
As an example of superficial research and thinking, the report by the Howard Commission on ...
EDITORIAL
Welcome to the first edition of noseweek. Is that really Jane Raphaely in a very ...
Gus
Oops ...
Frank's Fun
What Frank gets up to ...
Our Videos
...
Dear Editor
Dear Sir Re: The special subscription offer to old nose magazine subscribers This is the best (and ...
Pigging out in Cape Town
Is there anything in the rumour that the Cape Times is to fold its Saturday ...
Nose in a book
The General’s Daughter by Nelson Demille (Harper Collins) It’s today’s US Army where females are just ...
Nose on screen
FACIAL FUR (AND OTHER WORRYING FEATURES) I’ve always argued, perhaps wistfully, that looks, age and appearance ...