On television he is the shaven-headed guy often referred to as the brother of Schabir, Yunis and Chippy.  But Moe Shaik’s life story will leave few readers unmoved; his book, The ANC Spy Bible, has been released and it is a gripping read of 247 pages. 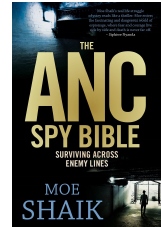 The story is devoid of bravado and reproach but sweeps the reader along on an incredible journey where there was no turning back. It’s the tale of a sensitive man who by chance became a master spy; not the James Bond-type but one who spent years active in the ANC underground.

At times the life he led almost destroyed him. It pulverized his nerves and left a dark shadow over his personal life.
The book starts as the young Moe waits to be arrested. He knows it has all been planned in order to divert attention away from a high profile wanted cadre who is being smuggled out of the country.

Moe expects to be tortured by the notorious Apartheid Security Police but has been assured this will only last three days. But under apartheid Section 29 legislation – detention without trial – the three days turn into months.

He endured cruel physical and psychological torture on a daily basis as they unsuccessfully tried to force the truth out of him. After a session of particularly extreme humiliation and punishment, a young policeman reached out to him, offering a word or two of support. That gesture was the beginning of their symbiotic relationship that continued beyond the day that Shaik was finally released.

While history will only know Shaik’s prison friend as the Nightingale, he and Shaik played a compelling game of both fear and courage, which cemented the career of the master spy.

Enter Sydney May, the representative of General Optical, a Johannesburg company listed on the stock exchange.  In March 1987 May traveled from Jan Smuts Airport to London Heathrow with a suitcase full of sample spectacle frames, a pack of printed business cards and copies of the company’s brochures. Beneath that lay the Nightingale’s reports.

May was none other than Shaik who wore a navy suit, ugly conspicuous bifocal spectacles and a copious amount of gel on his hair, which was brushed backwards in keeping with his Sydney May disguise.

Shaik was due to meet with the ANC’s new head of intelligence, Jacob Zuma, the day after his arrival in London. Zuma, who was then a rising star in the liberation movement, had especially come from Lusaka for the meeting and Shaik was nervous.

“He had served ten years on Robben Island and was known to be a crafty and skilful underground operator,” writes Shaik. “Easy-going, charming, disarming, people found him endearing. And this was how he built his networks; this was the source of his power.

He laughed a lot, mainly at himself, which made it easy for others to join in.

He treated his rural upbringing lightly, as he did the hardships of exile, prison and the underground. He found abundant humour in the small and funny things of life. I fell immediately under his spell.”

25 years later in 2012, Shaik walked out of the “world of secrets and intrigue”.
He admits that he naively believed the government would uphold the principles of human security as the principle that informs the work of intelligence.

He was quickly disillusioned: “The intelligence services under the Zuma government were converted into agencies that served the narrow power of the state and the insecurities of its president.”

But then he concludes philosophically: “Scars, like memories, are not good or bad.”

The book’s back cover blurb sums it up perfectly: It is a thrilling first person account that brings into sharp focus the role of Jacob Zuma and other players and sheds new light on some of the country’s most turbulent years.