Gordon Tilson is a middle-class widowed American, in his youth he has spent time in Ghana with the Peace Force where he met Regina, a Ghanaian woman with whom he fell passionately in love. They marry and she returns with him to America, pregnant with their only son Derek.

Regina has subsequently died, and he finds himself vulnerable and grieving on a Facebook site for widowers. He is soon persuaded that he deserves a chance at companionship and so he begins an online relationship with Helena, also a woman from Ghana who captures his heart. They have communication problems, not in what they want to say to each other, but in dropped Skype connections, where he fleetingly sees Helena, and then has to continue the conversation via emails. Slowly Gordon feels himself coming alive again. 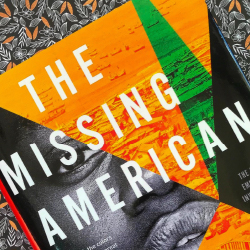 Then something terrible happens, Helena contacts him in a panic to say that her sister has been badly injured in a car accident and that the family can’t raise the $4,000 to treat her.

No alarm bells go off in Gordon’s head, because he has seen the woman of his future happiness, he believes, and everyone knows that Africa’s internet is not up to scratch, well at least one American is more than happy to believe that to be true.

So, he sends off the money and then decides to go to Ghana, Helena is thrilled and promises to meet him at the airport. Of course when he arrives Helena is not there, and her number has gone dead. Gordon waits for a few days before telling his old journalist friend Cas, that he thinks he has been duped and is on his way home. He also tells his son Derek where he is and why.

Cas, ever the journalist, persuades Gordon to stay on and see what he can find out about what the real story is. Within a few days he too falls off the map.

Kwei Quartey is a medical doctor who studied in the US and is the author a series of Inspector Darko Dawson mysteries. With this novel he launches a new series of Emma Djan mysteries.

Emma has always wanted to be a homicide detective, but her chances of that have been nixed by her boss trying to sexually harass her. So she applies to the Sowah Detective agency instead and gets the job.

Just then elections are about to take place, and the incumbent president’s opposition, standing on a no corruption ticket has been assassinated. At the same time Derek who has now found where his father is and why, has arrived in Accra to help find him.

This magnificent and complex story lays bare the lives of the sakawa boys who use highly significant ways to swindle their prey – forget 917 scams, these guys are next level. But with any good story there is a great reporter, Sana Sana who lives in hiding and is about to reveal the sakawa story and damage a lot of very powerful people, if he lives long enough.

The author takes the reader to the heart of modern Ghana. This is no picture postcard Alexander McCall-Smith story. There is violence and complexity, and the start of a wonderful new series. I can’t wait for Emma and the Sowah Detective Agency’s next adventure.