Lydia owns a bookshop; her husband Sebastian is a journalist who is not scared to put his byline on stories about the drug lords who control Acapulco where they live with their son Luca. Middle class, midline scared.

At a birthday celebration, a friendship that Lydia has made in her bookstore and a story Sebastian has written come together in a ghastly confluence; where everyone except Lydia and Luca are slain.

And so begins Jeanine Cummins’s story of a middle-class woman and her son taking the road to the North, to an uncertain chance of asylum, due to a relationship with a family member she barely knows.

American Dirt (Tinder Press) is a remarkably well-told story and intriguing in that it tells it from the perspective of a middle-class family, and a mom who has no real survival skills. At a time when her life is shattered, she will have to rely on the kindness of sometimes seemingly dangerous characters.

There is another level to the book though that raises it above another story of asylum seeking, and the tragedy that South Americans are forced to leave their homes to go to a country that, under its present leader, really wants them less than it ever has before. 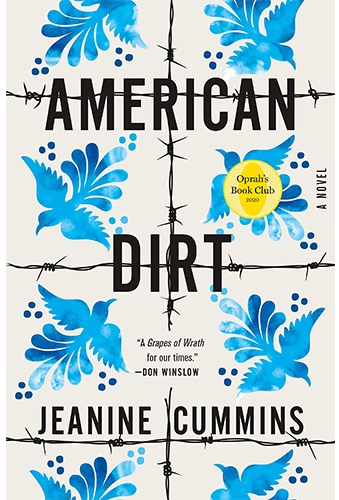 That level is the story of the loss that Javier, her “friend” from the bookshop has suffered because of the story that Sebastian has written about him. It’s a brave step to allow a villain – and this is no noble crook, he is an evil man – to have human feelings and to act because of the tragedy of losing what is dearest to him.

A complex tale of human suffering, fear and a long road taken. It might have done with a tighter edit in places, but all-in-all a good story, and chronicle of the horrors of life on the run.

Janine Cummins is the author of three previous books: a memoir entitled A Rip in Heaven and two novels: The Outside Boy, and The Crooked Branch. She was born in the US, of mixed Puerto Rican and Irish heritage, and her husband immigrated to the United States from Ireland.

There has been controversy from Latin American authors about whether Cummins had the right to tell the story of Latin American migration to the US. Even though the novel hit the best-seller lists, and was picked by Oprah Winfrey, her publishers cancelled a book tour in the US because of threats to her safety. This has prompted arguments from both sides about her right to tell the story, in terms of the argument about cultural appropriation. She has received support from members of the group known as the Latinix writers, and the threats against her have been decried by advocates of free speech and the right of authors to tell stories about cultures and experiences that are not their own.