It’s been said before that Finuala Dowling has something of Jane Austen about her writing, with her ability to pick up the minute details of her characters’ lives and the spaces they inhabit. It’s an accolade that Dowling herself once shied away from when her novel The Fetch was launched, saying that she could see some similarities, but also that she certainly hadn’t sought out the comparison.

In Okay, Okay, Okay (Kwela Books) Dowling uses the most fabulous satire, another Austen characteristic, to tell the story of several people all linked to Adamastor University. It’s set in the leafy heights of the southern suburbs of Cape Town, so little chance that the reader will not know exactly which institution she is writing about. But her choice of the name has a delicious meaning, according to various sources, I chose capepoint.co.za: 12 Titans were born before the Greek Gods and Adamastor was the untamed one. Like most deities of any real interest in terms of storytelling, Adamastor fell in love with the wrong woman and was turned into a rocky mountain at the tip of Africa. Apparently, he frightened the Portuguese sailors of yore who had to round the Cape of Storms.

So, there’s a delicious irony in writing about a once powerful institution brought low by a series of somewhat awkward events, frightening the heck out of the people who call it their academic home.
Dowling draws together a delightful set of characters and places them around the university or at it when the times they are a-changing, and things are required to fall.

Vida is a sound engineer, a fiery redhead, and an expert at her job. When we meet her she's  finishing up a lucrative gig in Turkey and about to travel home to Kalk Bay. It’s a nomadic life in some ways, but one Vida loves. She gets to earn good foreign currency that keeps her going, between travels, in quirky Kalk Bay. Of course it is no secret that Dowling lives in Kalk Bay, and that she grew up in a large family. It’s also no secret that her sister Cara Dowling is a very well-known and brilliant sound engineer (admission; and was a great friend of mine at Stellenbosch in the early 1980s). Vida isn’t Cara, but there are shadows that lurk, and they are lovely.

Vida’s connection to Adamastor comes after she discovers that she has peeved an influential producer and that she isn’t about to get a gig she thought she would, so she’s rather broke, but of good cheer. When she is offered a gig at Adamastor doing the sound for a fund raising evening she takes it. It’s here that she meets the Head of Effective Communication, Simon Landor, a former professor of English who has taken an admin job so that he can give his beloved wife a house with all the “Rondebosch” comforts. It’s a pity that he has missed the fact that what Miriam really wanted from him was time to finish her thesis on Olive Schreiner and/or her never-finished “Big Novel”. It’s also a pity that she has died and left Simon and his daughter Cecily alone to muddle along, with the addition of Loyiso who has become an “adopted” son and is a damn fine fast bowler for an old-tie boys’ school.

So much for the story characters. The plot ranges from blind faith in one’s usefulness, or being a useful idiot, to the fees-must-fall movement. It covers the sadness of those who have made academia their home, and now find that all the furniture is being tossed around. They are being plagued by Adamastor.

Like any well-plotted novel – and all of Dowling’s are – her characters have flaws. Simon’s is that he has hitched his wagon to the wrong star. He’s a good man who has given up what he loves the most: teaching for a wealthier life, but it seems chimeric at times.

Bruno, his insanely sex-mad friend, keeps having affairs with the wrong women, and Simon has to deal with him and his charm. Simon is the character in the book who gracefully takes the fall for the big guys, leaving him vulnerable in a way he doesn’t see coming. 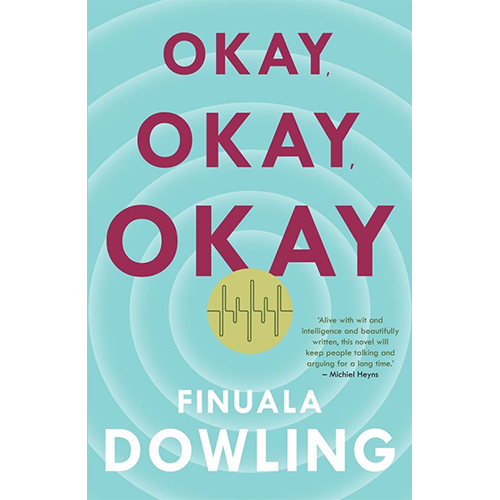 There are larger issues contained in the day-to-day comings and goings of this charming crew of characters. One of these revolves around how women are so often not listened to by the medical profession. It would be a spoiler to say how, but it is an important matter for our society and a failure that has killed many young women.

The other is Dowling’s ability to see a complex issue, like the fees-must-fall movement, from all sides, with heartbreaking humour. The lack of institutional care is highlighted in this totally compelling story, but in a visceral and real way. With her lens firmly focussed on the human side of the story, Dowling brings a fraught situation to life. To use an old saw, she makes the personal political. Thankfully she does it with a grace and lack of judgement that makes this not only a great piece of literature, but also a social commentary without ever becoming mealy- mouthed.

Dowling is able to write about Xhosa culture and students without being patronising because she knows them. Viwe, Simon’s assistant, has personal dreams that he has put on hold because he is in debt. His sister Siphokazi is literally the poster girl hanging on the walls of the stairs leading up to Simon’s department, but she is also the figure who stands for the great personal tragedy that befalls many in the attempt to make inclusion a real thing at South Africa’s largely white and endowed universities.

Through Dowling’s depiction of the everyday she takes simple acts and gives them a gravity of meaning that shocks. She sees people as the complicated and often misguided creatures we all are. Human, subject to hurt and the vicissitudes of fate, funny and real at the same time.

A truly accomplished book that made me roar with laughter, go green with jealousy at the sheer power of Dowling’s writing, and cry at times.