The postponement of the Spar vs Spar court case in the High Court in Pietermaritzburg has not prevented a well-placed whistleblower from coming forward with shocking information about the food retail giant’s leadership. The information he supplied rang a bell because two owners of Spar stores had made similar claims about the conduct of the Spar Group’s CEO, Graham O’Connor.

“I am by no means a disgruntled employee; in fact the contrary is true,” our whistleblower tells Noseweek.  “I am however, along with several other stakeholders (employees as well as Spar store owners), extremely frustrated and concerned about the apparent lack of ethical leadership that currently prevails in the company.” 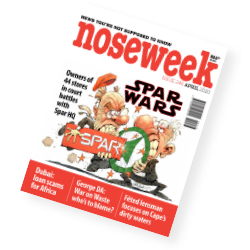 He said that since O’Connor was appointed to the position sometime in 2014, he has treated the Spar organisation as if it were his own family business, notwithstanding the fact that Spar is a large and prosperous public company listed on the JSE.

Declares the whistleblower: “It would appear that the Board of Directors as well as the Executive Committee have meekly looked on or turned a blind eye to what in most companies would be considered unacceptable conflicts of interest and even, in some cases, transgressions of the law. I don’t condone, but do understand this meek attitude, as O’Connor is seen to be a ruthless man who deals very harshly with those who stand in his way.”

Our source – Noseweek will refer to him as “Mr X” – supplied a list of examples of questionable actions that have taken place under O’Connor’s Spar leadership, stating that these have either been for his personal benefit or for the benefit of his family and friends. It includes O’Connor’s numerous appointments of personal friends to senior Spar positions.

Laurence Balcomb, allegedly a family friend of O’Connor and previously the managing director of Clientèle Ltd, was appointed to the position of Financial Executive South Africa, a new position on Spar’s executive committee. Previously the post did not exist and was created by O’Connor.

“The position was never advertised nor was it discussed at executive level and the first the executive committee knew of this new position, and the appointment, was when Laurence arrived at his first committee meeting,” claims Mr X.

Another two alleged family friends of O’Connor, Scott Forest and James Crookes, were appointed in senior positions while the people who had previously held the posts were demoted, only to be reinstated later when Forest fell out of favour and Crookes died.

At the time of his Spar employment, O’Connor was and still is the owner of Mandate Meals, which is a large Durban-based catering company specialising in the running of large company canteens. Mandate Meals at the time had obtained the contract for staff canteens at some of Spar’s distribution centres. Mr X says O’Connor, after his appointment, allegedly used his position to muscle Mandate Meals into the remaining distribution centres, thereby taking over the entire canteen service of Spar, which caters for a staff of around 7,500 people.

The catering company that had previously serviced Spar’s Western Cape distribution centre allegedly lodged a complaint to the Spar board regarding the process that had been followed when its contract was cancelled. “But this complaint was swiftly swept under the carpet,” says Mr X.

Spar sponsors the Durban based AmaZulu Football Club. Usually this would appear to be nothing out of the ordinary as large companies do sponsor sports teams and AmaZulu does play in the Premiership League. However, Spar has a particular strategy of only supporting women’s sport, which has added great value at club, provincial and national levels over the years, according to Mr X.

“I have it on excellent authority that the cost of the AmaZulu sponsorship far exceeds that of any of our other sponsorships. This is astounding, when you consider that Spar are also the sponsors of the South African netball team, ranked in the top four in the world.”

Noseweek has established that Spar’s sponsorship of AmaZulu is around R10 million per year and that its sponsorship of the national women’s netball team has been around R35m over the past four years.

“The real conflict here is that O’Connor is not only the CEO of Spar but also the Managing Director of AmaZulu. In essence he is directing Spar shareholder funds to a club where he has a vested interest,” claims Mr X. “This is a source of great discontent among many in Spar and is seen to be blatantly dishonest.”

In 2017, after being relegated following yet another dismal season, AmaZulu reinstated their premier league status by acquiring Thanda Royal Football Club for around R45m. Mr X says it is widely accepted that Spar footed the bill.

In July 2018, Kick Off magazine reported that Spar’s financial support helped AmaZulu buy their way back into the top league with the purchase of the now-defunct Thanda Royal Zulu’s status.

“Well, indirectly this did happen,” says one of Noseweek’s other sources. “The deal was facilitated with a loan from Grindrod Bank; Spar’s sponsorship of R10m per year was recorded as surety for the loan.”

Mr X says that according to Spar’s company policy O’Connor was obliged to take retirement when he turned 63 in August last year, yet he has continued to remain employed although no formal explanation has been supplied to Spar employees. “This is highly frustrating to many employees who are still being required to retire, some in no financial state to do so, at age 63.”

Grindrod’s company secretary, Cathie Lewis, did not supply contact details for Hankinson after being told why Noseweek wanted to send him questions.

The Giannacopoulos court case against the Spar Group Ltd, due to have started in the High Court in Pietermaritzburg on 13 March, has been postponed until late May.

Spar has been trying to halt the business activities of the Giannacopoulos family’s more than 40 independently owned Spar stores since last year, an action the family says is invalid and which should be set aside or suspended by the court pending the outcome of a complaint to the competition authorities.

The family is also asking the court to decide whether it was lawful, constitutional and valid for the Spar Group to have unilaterally changed the family’s credit terms from 30 days to seven days for some standard products.