The President’s recent Sona  address was described as a “lame duck” and “a lead balloon”.  Same old, no action. There were also people who didn’t like the speech. Cyril Ramaphosa intended to inject some hope and realism into the nation with his oration but instead, it acted as a general anaesthetic. It needed some punch and vooma. What if history’s best scribes conspired to re-write the event?

EFF Pre-Show
(As written by the Looney Tunes)

While suitably animated, entertaining and cartoonish, this part could have been much shorter. Bugs Bunny, Fred Flintstone and The Simpsons have some pearlers which perfectly summarises the sound and fury of the EFF, signifying the same nothing, but saying everything of worth in their antics:
“Yabba-dabba-doo! Zoinks! Pik-Pik-de Klerk! Beep! Beep! Eat my shorts!”

This part lacked gravitas and brutal honesty. We borrowed from the heavyweights of literature and the silver screen, including some input from the Statue of Liberty and Alfred E Neuman:
“Friends, comrades and fellow countrymen, lend me your fears. I have nothing to offer, but the blood, toil, tears and sweat of the tired, poor and huddled masses yearning to be free.

“To those who have remarked upon my presidency, it is clear you do not understand; I could have been a contender. I could have been somebody, instead of a bum, which is what I am. As you know, being a member of the ANC means never having to say you’re sorry. The ANC will rule until Jesus comes back.

“To the 1% who pay 61% of our taxes, do you want the truth? You can’t handle the truth – never before has so much been owed by so many to so few. So, I am going to make you an offer you can’t refuse: we are going to tax you on the beaches, we shall fleece you on the landing grounds, we shall expropriate you in your fields. For Eskom, for SAA, for corruption we have not even invented yet. We shall never surrender.

The President’s speech had some good fantasy elements, but if you are going to sell people fairy tales, you should make them more memorable, according to the Brothers Grimm. They also suggested stronger main characters, so the story could be illustrated as a children’s book, perhaps. We could sell some copies to make up for the budget shortfall.

“Mzansiland was renowned for its territorial disputes and its feisty birds. There was a striking girl called Sleeping Duty and a fearsome chick called Godzille. But the goose who got all the attention was Snow White Monopoly Capital. Everyone wanted a piece of her because she was the goose that laid the golden egg. Snow White Monopoly Capital was always pursued by seven dwarfs. They were all dopey, but their names were: Julius, Floyd, Mbuyiseni, Andile and Expropriation Without Compensation. 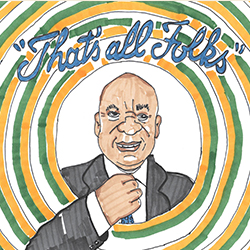 “The President was shocked, but apart from that, no one changed their behaviour.

“The wolf shook his head. What more could he do, really? Then he took a deep breath. He huffed and he puffed and he blew the place down like he said he would. Even as the country lay in ruins, people seemed to not notice Reality had hit them. The big bad wolf was frustrated. He decided that he would make himself even bigger; surely then people would notice him? On his next gig, he showed up as the elephant in the room and was again ignored.

“It is not clear whether anyone lives happily after. Could go either way, I guess.