When was the last time you called your wife beautiful? All the time, right? I wonder why we lie like that. We can all agree that Marilyn Monroe, Charlize Theron and Beyoncé are examples of great beauty. Does your wife look like that? I’m sure if you had a few beers and she had some good lighting, she’s worth a turn, but to go around calling all women beautiful is counterproductive. If everyone is “beautiful” no one is. The adjective is meant to portray physical attractiveness of an exceptional or higher standard. It’s like getting a distinction in good-lookingness.

Most women score between 30% and 70%. They are average, in other words. It’s an ungainly word as a descriptor, I know, but currently the vocabulary needed to label females accurately is either lacking or straining under the pressure of political correctness. Please do not inundate Noseweek with photographs of your wives, girlfriends or family. I know I have not met them and I don’t need to. It is mathematically impossible for me to be incorrect about this most of the time.

Looking at a normal distribution of data, (aka the bell curve) it is pretty clear that most people are mediocre when measured on human characteristics including IQ, height, remuneration and, I would add, attractiveness.

Interestingly, studies have shown that the vast majority of people believe they are more intelligent than they really are, as well as better looking. 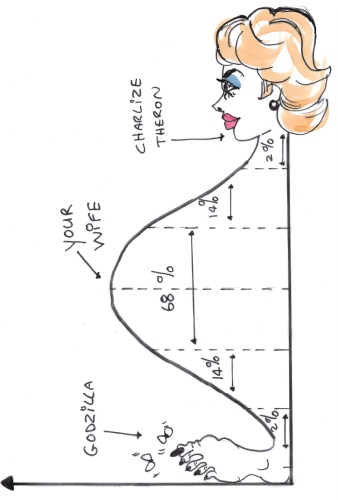 In reality they are the boep in the bell curve – even your Old Lady. She should not feel bad about this. It’s just science.

The concern here is that we are on a moral slippery slope when we start substituting candour with phrases of convenience because we don’t wish to offend.

We already started creeping over the abyss when our Minister of Higher Education stated that the word “fail” may be “too strong” for students who garnered less than 30% in their matric exams. He suggested we rather use “insufficient achievement” to refer to their scores. It’s a dangerous positioning. Yet, aren’t we doing the same when we refer to our bokkies as “beautiful”?

It is time to have the tough conversations in this country. Let us be the change we want to see in the world, starting in our own households. It is normal to feel slightly apprehensive at this stage, but stay true. Realise that you are doing your goose a favour by suggesting she slap on some make-up and do something about that muffin-top. It is a well established fact that increased attractiveness holds many evolutionary advantages; including better jobs and higher earnings. Good-looking people even report being happier than others. You’ve hit the trifecta! That should be enough incentive to be frank.

Be wary of the “beauty in the eye of the beholder” argument, as it’s a cop-out. Longitudinal investigations across cultures show that beauty is universal and conforms to specific ratios of facial symmetry and desirable body proportions. It is an objectively measurable variable.
You, therefore, have every reason to go for it… with caution.

Start by expanding your vocabulary, for instance: “My darling, you have a unique unmesmeric quality about you that is impervious to description.”

Try being totally honest (with a proviso): “You are by far the most gorgeous, sexy and appealing creature to have ever graced my side at this very moment.”

Another tactic could be to focus on the troublesome piece of clothing, avoiding having to mention the importunate body part directly. Thus, should you be asked whether her bottom looks big in those jeans, wink seductively and say: “It’s not the jeans.”

Internet experts advise steering clear away from any verbal responses to be totally safe. When asked whether she looks fat in a dress, it is not merely enough to gasp and appear shocked at the mere question. They propose you jump backwards if necessary.

This writing is not intended to be a How-To manual, rather to highlight the need for urgent redress so that we can move towards a more realistic future where people are encouraged to try harder. You experiment with your own schnookums and let us know how it goes.

A final thought; which should not interfere with the good work that you are about to do, is to remember that every time your better-half tells you that you are “brilliant” or “handsome” or “a sexy beast” – she is also lying.

And that is the ugly truth.