We are the Weather by Jonathan Safran Foer

In JM Coetzee’s novel/disquisition Elizabeth Costello, his eponymous protagonist, a fiercely outspoken vegetarian, delivers a lecture in which she likens the mass slaughter of animals to the holocaust. A member of the audience, an elderly Jewish poet, is deeply offended by the comparison: “The inversion insults the memory of the dead. It also trades on the horrors of the camps in a cheap way.”

Now Jonathan Safran Foer, the grandson of holocaust survivors and victims, having delivered an earlier broadside against factory farming called Eating Animals, has written a whole book largely based on an analogy between the holocaust and, not so much the slaughter of animals as the climate change that he sees as largely attributable to the factory farming of animals. 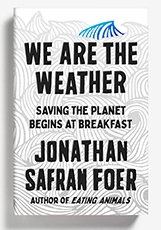 To sum up a complex argument, the contention (not only Foer’s, but that of the vast majority of climate scientists), is that the raising of livestock has a double effect on climate: partly through the deforestation needed for grazing, and then the sheer volumes of methane produced by the animals. By Foer’s analogy, we, that is all the inhabitants of a planet faced with mass extinction, are in the same position as the Jews who failed to realise until it was too late that the Nazis were intent upon their total annihilation. He contrasts his grandmother who, as a young woman, “walked more than twenty-five hundred miles, endured freezing temperatures, illness, and malnutrition, so that the Nazis wouldn’t kill her”, with her sister, who remained behind, and was executed along with most of her family.

“Facing climate change,” Foer writes, “requires an entirely different kind of heroism, which is far less intimidating than escaping a genocidal army, or not knowing where your children’s next meal will come from, but is perhaps every bit as difficult because the need for sacrifice is unobvious.”

Foer returns repeatedly to the story of one Jan Karski, a young Catholic, who in 1942 travelled from Nazi-occupied Poland to London and America to inform world leaders of what was happening in Poland and elsewhere. In the US he spoke to a Jewish Supreme Court Justice, Felix Frankfurter, and told him of the clearing of the Warsaw Ghetto and the extermination in the concentration camps. Frankfurter told Karski, “Mr Karski… I must say I am unable to believe you.” When pressed by a colleague, Frankfurter said, “I didn’t say that this young man is lying. My heart, my mind, they are made in such a way that I cannot accept it.’’

His book was written before the current devastation of Australia by rampant wildfire, but he could have found support for his contention there. Also, if the theory is correct that the corona virus owes its origins to the Chinese predilection for freshly-slaughtered (“warm”) meat, the animals would seem to be having their revenge.

As Foer’s title would have it, the cause of such “natural” disasters is not some quirk of nature: we are the weather, in that it is shaped largely by our eating habits: “Agriculture accounts for 24 per cent [of annual greenhouse gas emissions], mostly from animal agriculture”. And that figure, according to an authoritative study, increases to 51% if we include the loss of “the Earth’s photosynthetic capacity” owing to deforestation: “Vast tracts of forest are being denuded to create grazing for the cattle that will be killed to feed our craving for meat.”  And, awkwardly for vegetarians who may be tempted to feel exempted, Foer shows that dairy and eggs are almost equally harmful to the environment: only a totally plant-based diet, in short veganism, can claim not to be harmful to the planet.

Foer admits that he himself finds a vegan diet difficult, indeed impossible. He guzzles the odd burger when under stress, and has not been able to give up cheese and eggs. And he realises that to expect people to give up meat and dairy altogether is futile.

So, as his subtitle suggests, he proposes a compromise: cut out meat and dairy not only at breakfast, but at lunch as well, and restrict your meat and dairy binges to dinner time. His argument is not as much a moral one, based on a humanitarian concern for animals, as a practical one, based on the amount of meat and dairy consumed by humans. Reduce that, he maintains, and you will slow down the climate change that is about to turn much of the planet into a dust bowl or a flood plain.

Foer’s book, yes, is a harangue, and we don’t like being harangued. But he is also a gifted novelist, and his harangue is eminently readable, ultimately even poetically moving. It is both a lament for
what we have lost and a plea for the preservation of what we have left.