By the time you read this, the trial will already have begun – on Tuesday, 24 February – in the Western Cape High Court, Cape Town, in which attorney Leonard Katz, head of the insolvency department of ENSafrica, previously Edward Nathan Sonnenbergs, is seeking R1 million in damages from me, Martin Welz, as First Defendant, and Chaucer Publications (Pty) Ltd, publisher of Noseweek as the second defendant.

He seeks these damages from us – plus costs which could easily exceed that amount should we lose – for allegedly having defamed him in an editorial and an article by me, published in nose177 in July 2014, as well as on the cover of that issue, captioned “The man who stole justice”.

Katz, better known to Noseweek readers as “Lennie the Liquidator” describes himself in the summons as “a director of ENS and a senior attorney who has been in practice since 1987, has gained prominence and is well-known as a specialist in insolvency law – and is the national head of the ENS Insolvency, Business Rescue and Corporate Recoveries department.” (On its masthead, ENS describes itself as “The largest law firm in Africa”.)

Katz simply describes me, the first defendant, as “an adult male journalist who is permanently resident in Rondebosch”. Also that I am the editor of  “a monthly magazine known as Noseweek”; and that I am the sole director and “corporate controller” of Chaucer Publications, the owner and publisher of Noseweek. 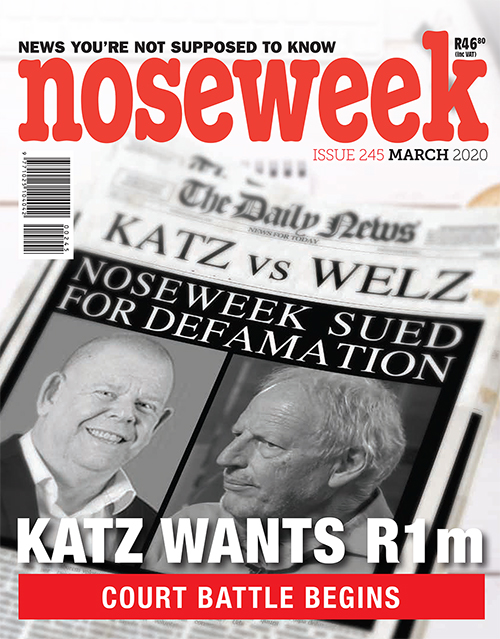 Noseweek he (more flatteringly) describes as “a magazine that is widely distributed in the Republic and Namibia and is widely read by the general public. A large proportion of Noseweek readers are professional persons, including members of the legal profession.”

The Noseweek cover, the editorial headed “Lennie the Liquidator makes a mockery of the law”, and the article in nose177, headed “And then there’s Brakspear”, Katz alleges in his particulars of claim, were defamatory of him and wrongful in that they inter alia were intended to mean that he acted to subvert the course of justice, was dishonest, and had conducted himself in an unlawful and unprofessional manner.

Various passages in the editorial were, he alleges, also meant to suggest that he was a dishonest person generally, was unfit to practise as an attorney, had subverted the course of justice, devised fraudulent schemes, is prepared to act unlawfully and/or unprofessionally on behalf of his clients in return for payment of money; that he acted without scruples and this has been a matter of public knowledge for years.

He further claims the Noseweek editorial and article meant to suggest he fraudulently manipulated court proceedings and charged unjustified and/or unconscionable fees.

According to his Particulars of Claim, the article contained much of the same, but in addition meant to suggest he had fraudulently manufactured a debt in order to liquidate a company.

Katz concludes: “As a result of the aforesaid defamation the Plaintiff has been greatly injured in his fair name, fame and reputation, and in his avocation as an attorney and has suffered damages in the amount of R1,000,000.”

In addition he asks for interest on this amount and costs.

The Noseweek cover, Editorial and article in nose177 are attached to the summons and form part of the trial record. Readers will find them on Noseweek’s website, to read what it’s really all about.

In my “plea” [response] to the  particulars of claim listed in Katz’s summons, I start by countering his claims to fame and status with some of my own:

“First Defendant is a senior journalist and editor, having commenced his career in journalism in 1975 and having practised as such uninterruptedly since then. He has held senior positions on various news publications, including Pretoria bureau chief for the Sunday Times, Parliamentary correspondent for the Sunday Express and head of investigations at Rapport.  He has been the editor of Noseweek since it was founded in 1993.

“He has acquired a national reputation as an ‘investigative journalist’ and in that capacity has been the recipient of various awards, including the Checkers Award for Consumer Journalism (twice), the Stellenbosch Farmers’ Winery Award for Enterprising Journalism (the pre-eminent journalism awards at the time), the South African Union of Journalists’ Pringle Award for advancing press freedom, the Mondi Premier Award for Business Journalism and an honorary award for promoting corporate governance through investigative journalism in the 2007 Sanlam Financial Journalist of the Year awards.

“Prior to commencing his journalism career, First Defendant was employed for two years in the Office of the Master of the Supreme Court in Pretoria, auditing deceased and insolvent estates, was employed for two years as Registrar to the Hon Mr Justice O Galgut, and completed three years of attorney’s articles while obtaining a B.Proc degree. He went into journalism immediately thereafter and has never practised as an attorney.

“I deny Katz’s claim that Noseweek is ‘widely read by the general public’ and in amplification of this denial, I plead that Noseweek is subscribed to and/or circulated within a niche market of sophisticated, well-educated, mature professional and business persons who are not insensitive to, and are familiar with the publication’s typically irreverent, humorously cheeky and occasionally provocative writing style,and accordingly understand and appreciate it as such.

“I plead further that the cover he complains of does not identify him by name and is therefore not per se defamatory of him. The provocative caption – 'The man who stole justice' – is a teaser inviting the reader to buy the magazine and find out by reading the article who the subject is – and will also get the meaning from the full context provided by an extensive story.

“In the alternative, should the court find that the Noseweek cover and/or the editorial and/or the article complained of are per se [on the face of it] defamatory of the plaintiff [Katz], and/or were intended to and were understood to bear the meanings attributed to them by the Plaintiff, then the cover, editorial and article:
• contained matter that was substantially true, and was published in the public interest;
• amounted to fair comment, premised on substantially true facts;
• were published on a privileged occasion, in that the defendants had a moral or social duty to make the publication, which was made to people who had a right to receive the information, and/or
• were published reasonably in the circumstances, in that the reports… are substantially based on, or are a reasonable response to documents, statements and court records that are quoted in the Noseweek reports, said documents, statements and court records having been either generated by the Plaintiff himself, or with his knowledge, or at his behest, or being known to Plaintiff [Katz].
•In further amplification of First Defendant Welz’s claim to reasonableness, it should be noted that the Plaintiff has repeatedly in the past made it clear that he was not prepared to respond to material published in Noseweek, stating on occasion that ‘As regards the allegations relating to me, I find them too pathetic to warrant a response.’ And ‘I have featured in a number of Noseweek articles over the years… I have not responded as I have always been of the view that it was a waste of time to engage with Noseweek’.

“This occasion proves to have been the exception. In accordance with their commitment to freedom of speech, First and Second Defendants [Welz and Noseweek] published his per se defamatory responses immediately they came to our knowledge. By publishing his responses, First and Second Defendants did not concede the correctness thereof, except where specifically so stated, but as a reflection of their commitment to freedom of speech.

l?In further amplification of the Defendant’s denial [that the words complained of were unlawfully defamatory], when reading the passages complained of, and all other material published in Noseweek, Noseweek readers would be familiar with, or quickly register the publication’s uniquely free, irreverent and occasionally entertainingly cheeky style of writing, a style that Katz has himself on occasion described as ‘satirical’.”

And the Plea concludes: “Wherefor First Defendant prays that the Plaintiff’s claim be dismissed with costs.” – The Editor