Coins for the car guard

Piet struts the streets of Germiston barefoot and with his shirt open, except for one button near the bottom which he closes up lopsided. This is the way he held sway over the beaches of Margate back in the day. Today, at 50, the strawberry blonde mane is gone, as is the gold tooth he lost in a bet, but his intelligence and cunning linguistics remain as ready to do service as when bevvies of beach beauties kept him maintained in exchange for a taste of his skilful tongue. People always thought he would become a lawyer or a professor. Maybe he still will, but for now, he is the local handyman – when he feels like it. 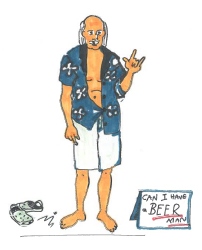 “Buy me a drink, will you love?” Piet says to me; “I gave my last coins to a car guard.” The barman dutifully complies.

“Whoa! Zama, stop!” I exclaim. “I am not paying for Piet’s drinks again today. Not happening!”

Zama pours the vodka back into the bottle and shrugs: “Sorry Professor. I’m not allowed to give you any more till you have paid your tab."

“Car guard… really?” I say to Piet. He grunts and surveys the rest of the pub. The place is empty, except for a few voices I hear coming from the courtyard behind me. Piet gives them a quick once-over, decides I am the better prospect and takes the seat next to me.

“Yes, a car guard. You know the one,” says Piet. “He combs his Brylcreem side-path. Dresses like he is going to church in 1984, instead of hustling in the parking lot at the Pick n Pay. A bit heavy-handed on the Mum for Men.” I say I do know the guy and that I sometimes give car guards R20 at a time because they at least show up for 12 hours of work every day.

“Work?” snorts Piet: “He is basically a beggar with neon trimmings!”

Piet and I disagree on this point. To me, car guards or window washers are like small businessmen, with public spaces as their offices. We should treat them with respect.

“What does that mean?”

“He’s making you feel better about your own privilege. That is what he is really trading in – guilt assuagement. Do you know what he does with that money, sweetheart? He marches straight across the road, comes in here and buys a beer!”

Piet swivels the barstool around, leans his back against the counter and spreads his arms to the sides, like Jesus.

“Let me get this straight,” says Piet: “You will give a random stranger enough money for a beer, but I, who have been providing you with fellowship facilities for many years, have to remain parched?”

“Ag please,” I retort. “You can’t now also open a Guilt Entrepreneur business here. The market is already flooded.  Anyway, what you are doing is extortion.”

Piet jumps off his chair. He unfastens the crooked button and does it up again, straight. In a voice loud enough for the whole suburb to hear, Piet speaks to himself: “There are times in life when a man finds himself alone. When he does not ask for forgiveness for his sins, because God knows there are many. He does not ask for sympathy or salvation. He asks only one thing…”

Piet knows he has the ears of the people in the courtyard and amps up the volume a notch: “Is it really too much to ask for a beer?!”

The table from outside quietly make their way past us. Just before he exits, one of the men pauses. He gives Piet a R20 note. “Here you go, my brother. I’ve been where you are; alone, without shoes, without hope. No one who will listen. Take it. I was blessed this morning. One of my clients gave me R20.”

I recognised that guy before I saw him. His Mum for Men preceded him.

Piet thanks the man and motions the barman closer: “Zama, I believe I will have that drink now.” He takes a deep draught, smacks his lips through his missing tooth and winks at me: “It’s nice to see trickle-down economics working so well in Germiston.” (Thanks to Rhodes Economics lecturer Ron Weissenberg).