The street quacks may be right

Yes we laugh at them and call them religious nut jobs, Bible thumpers or just plain crackheads or alcoholics. But ponder this for a moment: these people can be found in nearly every city from Jozi to New York and they all have one message: The End is Near.

And why do we laugh? 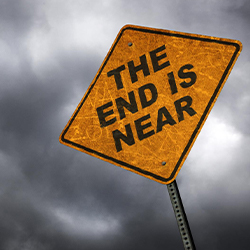 Well because the average Joe – you know, the most of us who still claim to have our wits, common sense and all that would describe us as fairly sane – cannot fathom the thought of the world coming to an end or a catastrophe virtually wiping out mankind. After all, we reason, life’s daily grind is more than enough to worry about.

Hey! I’m afraid we all have to take another look, rethink whether these so-called quacks, messengers of doom, are really unemployed extras from the classic movie “One Flew Over the Cuckoo’s Nest” or maybe, just maybe, their street corner Bible-thumping “rhetoric” is actually upon us and the real quacks are the likes of US President Donald “the twit” Trump, who are in denial about climate change, which is as real as MTN’s questionable business practices e.g. screwing the South African consumer on excessive data charges and “bankrolling terrorism”.

Unless you have been in a coma for the past 10 years-or-so you will have noticed that we are not just facing climate change, we are facing what I would like to describe as climate “torture”.

Man oh man! We are now facing record-breaking droughts, only to be compensated with flooding rain storms that are accompanied by winds so devastating they have left some of our communities resembling a tornado-stricken town in America’s heartland.

And I have resorted to stop calling my province Mpumalanga (rising sun) and instead refer to it as Shisalanga (burning sun). I used to get irritated by people complaining about the heat and shut them up with a snooty remark like, “you complain as if you grew up in Canada.” No more – I complain along.

So, my question: why are we here in Mzansi seemingly quiet about this obvious impending doom whilst the rest of the world is up in arms and saying it loudly? Are we not the masters of constant protests?

So serious is this climate matter it was the New Year’s message from the Pacific Island nations – and that includes New Zealand – who were the first countries to ring in the New Year.

Now, clearly, with rising sea levels those Pacific Island nations could end up under water. Barring the Springbok rugby team, who else could possibly take pleasure in that? Okay, bad joke. The subject is too serious for that.

Here in Mzansi we are more concerned about load shedding than we are about the even bigger problem: our dependence on our coal-driven power plants.

We need to shed our dependence on the use of this heavy air pollutant and play our part by reducing Mzansi’s carbon footprint.

One would think that we would use the Eskom fiasco to be, by now, seriously looking into environmentally friendly alternative power sources.

Yes, we are talking about them but certainly not seriously looking into them. Heck, with the amount of money that is constantly being pumped into and stolen from Eskom, we could most probably afford to pump some of that into kick-starting the alternative energy development process.

And please, oh please, not some nuclear deal that could see some of our morally bankrupt politicians becoming honorary members of the Russian oligarchs’ club.

Funnily enough, or I should rather say sadly, a promising programme that saw the government’s RDP houses being fitted with solar-powered geysers, inexplicably faded away – at least that it is what this writer has observed in Barberton.

A simple inquiry through current RDP contractors as to what happened yielded no answers. But knowing how our tender process is treated like a full-cream cash cow the programme was probably milked like the infamous Eastern Cape Esidemeni Dairy Farm project.

But at least the programme was an indication that there is political will out there somewhere – something we should applaud and encourage.

Remember the warnings of the Bible thumpers!

- According to the World Economic Forum’s recently published Global Risks Report 2020, economic confrontations and political polarisation will rise this year, as collaboration between world leaders, businesses and policy-makers is needed more than ever to stop severe threats to climate and the environment.

The African continent will be hardest hit by climate change as it is more vulnerable than any other region to changing weather patterns. – Ed.