Aquinas, Kant, Dawkins, Samson – all great philosophers who have grappled with the nature and essence of “a higher power”.

Samson (the local hobo) walked into the pub, wearing two pairs of oversized tracksuit pants, a T-shirt, a buttoned-up shirt, a waistcoat, a very large, red lady’s jacket and a green umbrella. He looked like a garden gnome ready for Christmas. 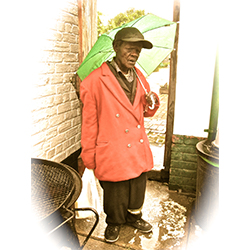 “Shorty!” we all cheer. We were already full of festive spirits. “Who’s turn is it to buy Samson a drink?” Jan asked Zama behind the bar. “It’s the Professor’s turn,” said Zama. “Dammit!” Piet complained. “That client I did that roof leaking job for never paid me. Eish, fair is fair. What are you having, Samson, your normal Zamalek?” Piet asked.

Samson is a very good storyteller. He’s especially good at re-enacting Bible stories in a unique way. He has the capacity to play the roles of many characters at the same time. People say it is because he, himself has many personalities.

Samson waited till he had his rum in his arthritic hands before announcing that he was going to tell us the story of Abraham and Isaac of the Old Testament. As he spoke, he assumed the roles of both Abraham and God. His body language and tone shifted between a small and ensnared Abraham, looking up towards God, who hovered somewhere above the ceiling fan. The role of Isaac didn’t need interpretation, I guess because all he had to do was lie there.

God was a menacing character, pointing fingers and speaking loudly, like a “baas” who himself might have been on his third round of rum.

Samson hollered, holding his arms out, like the Jesus statue in Rio. Jan and Piet applauded. “He’s good, hey?” said Piet. “What did Abraham do?”

Samson shook his head as a shocked Abraham and then carefully took a sip of rum, as himself, partly for dramatic effect and partly because he was shaking and didn’t want to spill anything:

Scowling at the ceiling fan, Samson (as Abraham) said: “I don’t have a lamb to braai, I don’t know what you expect me to braai.”

Samson took another sip of rum, this time as God: “‘Not a problem,’ said God, wiping the rum from his lips. ‘Take that son Isaac of yours, bind his legs like a lamb and put him on the fire. I am God!’ God pointed a final devastating finger, Abraham sighed and lit the pyre.”

Samson bowed dramatically: “Don’t you see, my friends, imihlobo yami, it was all a trap? Abraham never had a choice.”

People frowned and laughed and moved on to other conversations, but Jan wanted to understand the moral of the story. “Shorty, tell me something, what do you mean ‘it was a trap’? Are you saying God talks in riddles? Why did he do that?”

Samson shrugged. He took a deep draught of his Christmas rum and said: “He is God. He can surely do as he wants?”

And with that axiomatic statement, Samson cracked the conundrum of pre-destiny, determinism, free will and the nature of God – there is no riddle to be solved, just a reality to be accepted. We might amuse ourselves, arguing that theories of evolution are more accurate and superior in understanding when compared to the mythical versions that the Bible or Quran teaches.

The truth is, they are all as equally outrageous and incomprehensible as each other. And whatever free choice we think we have, which is likely to be very little, is ultimately of no consequence. We are at the mercy of a merciless “universe/god/nothing” we cannot possibly understand.

Jan came up to me and addressed me in a reverent tone: “You know people say Samson is a prophet. Can I tell you what I understood from his latest teaching?”

“To enjoy the rum whenever it is offered,” said Jan, “And always try to keep a lamb handy, just in case.”

More than that none of us can do, really.