Ah yes, another year has gone and another has come and, of course, with this we can expect as always much talk of going into the new year with some sort of newly found oomff. This of course is called a New Year Resolution but for realists, well, it’s going to be, as always, same ****, different year.

Realists? really? No, these people are actually called pessimists, hum- drummers, party poopers, killjoys and I am glad I am not one of them. And nosey ones, I trust – or rather hope – that you are not one of them as well. Because the “reality” is that just to be alive as we go into a new year is reason enough to be optimistic. Unless you’re doing life without the possibility of parole. Then yes, indeed, your new year can rightfully be described as same s*** different year, to say the least!

But there is one person who is most probably not looking forward to ringing in the New Year and that is the Umshini Wami crooner. Yes currently he is only facing allegations surrounding the arms deal, but heck Al Capone was only nailed when he was slammed with tax evasion. So we’ll take what we can get. Besides, it was such a joy – not to mention funny as hell – to see Msholozi in the dock

And man oh man, nosey ones, if Mr Zuma could postpone the ringing in of 2020 he certainly would. I mean after all, would you welcome it knowing that once again you are going to be sitting in the dock with that obnoxious, sarcastic, up-yours-South Africa grin smacked on your face? Remember that grin? The one he displayed when he mocked how “some people” pronounce Nkandla as ingkaaandlaaa.

Now before I get to my revolution please allow me to share a little song I have penned, inspired by the crooner.

This little number, min you, is written in the hip hop genre (rap if you like) and uses a sampling of the late Lucky Dube’s song Prisoner for the backing track. 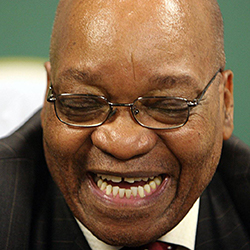 Alrighty then, enough about the Gupta puppet. New Year resolutions? Argh! Weak weak weak, even the word resolution itself is weak. Think about it, did you ever get excited at hearing that your municipal council took a resolution? No.

Well as for me nosey ones, and I suggest you might want to take my lead on this, going into the new year I am embarking on a revolution of sorts. Yes indeed an aggressive, non- negotiable  stance on things I want to turn around.

My number one priority is to introduce, or rather insist, that my righthand man on the farm embrace the culture of loose joints. Yes, loose joints, you know those pencil thin marijuana cigarette sticks. Why? Because I am fed up with him working for ten minutes and then stopping for 30 minutes to roll a spliff.

Simple logic here: if he had a cigarette pack full of loose joints I wouldn’t lose out on hours of labour.

Call this my employer revolution. Yes, we baases need to stand up for our rights.

However, as determined as I am to insist on this, I doubt I will succeed since the bugger smokes those Bob Marley cigar size spliffs. And I think he gets as much joy rolling them as he does from smoking them, so yes, I’m afraid this call in my revolution is doomed to failure.

I resolve to talk to my man about wasting time rolling his spliffs, talk to my man? No, what is he, my son? No I must insist, Viva la revolution!

Let’s face it, all in all we need to be realistic about the fact that the ringing in of the New Year will not erase the challenges we had as of midnight December 31, 2019. Sorry to be a killjoy but come 1 January, the party is over and those challenges will still exist.

But, hey, don’t be a pessimist. Rather capitalise on that renewed spirit and oomff we all get from a new beginning and launch your revolution with oomff and gusto. If you can’t do that then roll a cigar-size spliff, take a toke and think about Zuma in the dock. Happy New Year Nosey Ones.