The preamble to this book reassures us that “any resemblance to actual cockroaches, living or dead, is entirely coincidental”. This is not entirely candid: yes, as a cockroach, the book’s main character, one Jim Sams, is unique; but, reconstituted as a human being, he bears an unmistakable resemblance to an actual living Prime Minister of Britain. He is, in the first line of the novel, described as “clever but by no means profound”, which admittedly could describe any number of people, but once the idea has lodged in one’s brain, is difficult not to see as entirely appropriate to the present incumbent of No 10.

The cockroach of the title, then, is an actual insect that has scrabbled from the Houses of Parliament into No 10, to wake up as Prime Minister. Readers of Franz Kafka’s The Metamorphosis will recognise here a variant of Kafka’s fable, in which one Gregor Samsa wakes up to find himself, not exactly a cockroach, but einem ungeheuren Ungeziefer, that is, a monstrous vermin; but McEwan presumably wanted his protagonist to have a more specifically dislikeable identity. Rightly or wrongly, we think of cockroaches as not only dirty but also somehow slithery and underhand. In short, if politicians were insects they’d probably be cockroaches.

These cockroach-like qualities McEwan recreates not only in Prime Minister Sams, but in almost all of his cabinet: it is a moment of real joy to the newly incarnated PM to realise his whole Cabinet consists of transmogrified cockroaches – except the Foreign Secretary, whom he recognises as an unreconstructed human being, and ousts by a trumped-up sexual molestation charge. (McEwan uses the opportunity to take aim at the excesses of the #MeToo movement and its proponents: “On the opinion page a younger member of The Guardian staff decreed that a victim was not only always right, but had a right to be believed.”) 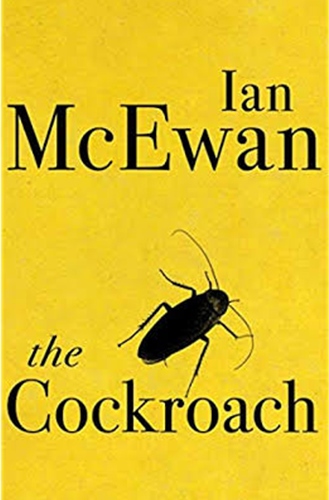 The central concern, indeed obsession, of Sams is called Reversalism, which a gullible nation has just voted in favour of: a proposal that Britain will reverse the flow of money, so that people will pay to work and be paid to shop. Passionately opposed to this, and much reviled by the Reversalists, are the Clockwisers, who want to remain in synch with the rest of the world. (Although Archie Tupper, the President of the United States, believes Reversalism to be a grand idea, and regularly tweets his support.)

Yes, it’s Brexit, and no, it’s not subtle. The Cockroach is a bit of a jeu d’esprit on McEwan’s part, a fairly slight, 100-page volume that offers an amusing footnote to his heftier productions like Atonement and Saturday. Which is not to say it’s not serious. It is, of course, satire – as defined by my Glossary of Literary terms: “the literary art of diminishing a subject by making it ridiculous and evoking towards it attitudes of amusement, contempt, indignation, or scorn.”

And there is no doubting that McEwan is in absolute earnest in sending up what he clearly regards as the monumental stupidity and dishonesty of Brexit. An uncomprehending Sams is confronted with the German Chancellor’s “simple, plaintive, Warum?”: “Why are you doing this? Why, to what end, are you tearing your nation apart? Why?”

But more damning than the Chancellor’s Warum is Sams’ own summation, not only of Brexit but of its intellectual and ideological roots, in a eulogy on the wisdom of cockroaches: “We understand and love the dark. In recent times, these past two hundred thousand years, we have lived alongside humans and have learned their particular taste for that darkness to which they are not as fully committed as we are. But whenever it is predominant in them we have flourished. […]When that peculiar madness, Reversalism, makes the general human population poorer, which it must, we are bound to thrive. If decent, good-hearted, ordinary people have been duped and must suffer, they will be much consoled to know that other decent, good-hearted, ordinary types like ourselves will enjoy greater happiness even as our numbers grow.”

So we are making the world safe for cockroaches. After all, we know that cockroaches are one of the oldest species on earth, and will probably survive us by millennia.

The novel ends (spoiler alert) with the whole cabinet reverting to their cockroach personae and bodies for the Christmas break and returning to the Palace of Westminster to spend the festive season with friends and relatives. Crossing Whitehall, the Chancellor of the Duchy of Lancaster, Trevor Gott, “got ahead of himself, as he sometimes did, and ran out too soon and disappeared under the wheel of a rubbish truck.”

Satire is often savage, and one of its pleasures, it would seem, is to skewer your enemies: clearly Ian McEwan would relish seeing Michael Gove disappearing (“truly two-dimensional”) under the wheel of a rubbish truck. He is not alone in this uncharitable fantasy. But is it a consolation? We derive an unholy pleasure from the cartoons of Zapiro; but did they help to bring down Zuma? Will McEwan’s book in any way disrupt the careers of the likes of Johnson, Gove and the rest of the cockroaches? Probably not, on both counts; but we can laugh, so as not to cry.