He gently patted the crimson abrasions on his cheeks, wiping some blood on his overall, and explained: “There was a first klap, ‘Ker-twa!’  Then a second! Then a third!” Jan’s re-enactment of the scene looked like someone conducting an orchestra with a flat hand. “I remember staggering around a round table in the corner, with five chairs around it.”

“It looked like he was dancing,” laughed Piet with a nostalgic grin. “The sound reminded me of when we cracked the whip to herd cattle on the farm: ‘Petaf! Petaf! Petaf!’” Piet shook his head.

“Jan was looking for it, though. I told him to back off the guy, but you know what an attitude, a houding, Jan has.”

“I probably deserved the first one,” Jan confessed. “Maybe the second one, but the third klap was unnecessary. I was already on the floor.”

Houding or not, I demanded to know what Jan could possibly have said to deserve a Triple Snotklap.

“Jan told Big Ben he was getting fat.”

“Oh Lord,” I said and offered to buy Jan a beer.

Jan retreated into the corner with his houding and his beer, mumbling something about “freedom of speech.” Piet took centre stage, regaling the late afternoon shift with the events of the day.

He kicked the story off with their vodka-infused watermelon breakfast and built it up to a dramatic peak with the Triple Snotklap at the Bowls Club.

It was better entertainment than DSTV. 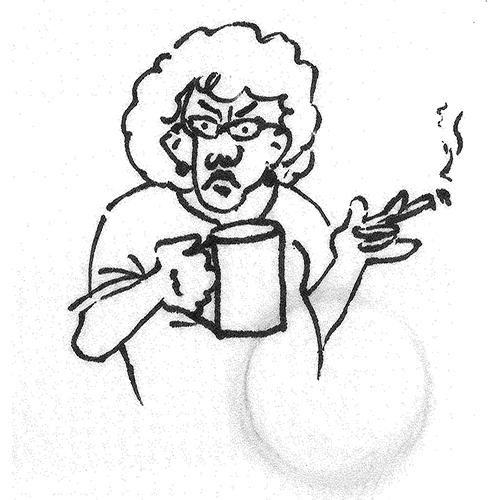 My thoughts drifted as I watched the sun set over the pub. Sunsets can be quite vivid here, because of the pollution from the factories. I wondered whether “Freedom of Speech” was an argument in Jan’s case. Or Penny Sparrow’s for that matter. Or Charlie Hebdo in France? Or anyone saying anything, ever? Did it even matter that the comment Jan made was factually correct?

Everyone in the pub agreed that Jan deserved all three of his snot-clouts, not because he was wrong about Ben’s burgeoning boep, nor because he did not have the right to say it, but because he knew his statements were causing offence and likely to trigger a nasty reaction.

Jan agreed. “I should have backed off when I realised I was hurting poor Ben’s feelings.” Charlie Hebdo did not take such a conciliatory tone. Their snotklap proved fatal.

“Freedom and rights se ma se moer!” declared Piet, the double brandy kicking in. “When you come to the East Rand, there is no freedom. You have to choose to be ‘free’ or to be dumb.” He used the word “dom”. “One can’t always have both.”

There is a reason we call Piet “The Professor”.

I guess you have to ask yourself whether you want to exercise your “rights” and walk out with a broken leg and a bruised eye. Or do you back off and have a bruised ego? Other factors come into play: the mood, the audience, and the relative size of the opposing sides. In Jan’s case, it was a watermelon-stained dronkie on one side; on the other, a bearded behemoth of a man with a notoriously bad temper.

Jan might still have won the crowds with a great oration. If he had come out with an “I have a dream,” or a “Four score and seven years ago,” maybe he would have had a chance, but a “Jirre, Ben, if you get any bigger you’ll look like your mother,” was simply not going to have the crowd cheering.

Please do not make light of Jan’s snotklap. A snotklap can lead to someone avenging the original snotklap. Soon, people could organise themselves into groups of snotklappers and counter-snotklappers. They could become gangs, or if very organised – national armies. Words matter. Cartoons matter. Actions matter.

“Freedoms and rights are for sissies,” concluded Piet. “Opportunities and choices are for the peoples of Germiston. We all have an “opportunity” to say what we want, but so does the guy who disagrees with you. Similarly, you don’t have the ‘right’ to do anything, you have a ‘choice’. Don’t get all surprised if someone gives you a snotklap or shoots you in the head.”

The sunset had run its course. It started pink, turning a bright red and finally blossomed into a deep purple –like Jan’s cheeks.

I bought Jan another beer. I felt sorry for him. But, maybe, I figured, The Professor had this one correct: Every time you leave your house, pretend you are walking into a bar in Germiston. You could just survive longer that way.