Greg Marinovich: Shots from the Edge

Greg Marinovich maintains towards the end of this fascinating but distressing book: “I have never been a neutral or so-called objective journalist or documentarian. I believe this to be impossible, given the baggage we all carry as individuals and as members of various groupings.”

In spite of Marinovich’s denial of neutrality, his take on the scenes of ‘conflict and resilience is generally unflinching, unsentimental, descriptive rather than evaluative. He lets facts speak for themselves, horrifying as they often are. There is nothing callous or matter-of-fact about his reportage, but he doesn’t dramatise for effect. He seems to feel, honourably, that it is not for him to emote about the sufferings of others.

Indeed, I can think of only one instance in this book of Marinovich’s emotions intruding upon his observation, as he listens to a young woman recalling her appalling experiences:

“Despite the calm, singsong way in which she recounted events that no adult should ever experience, much less a child, tears kept welling in my eyes and sometimes my throat was too constricted to speak, so I just grunted.” 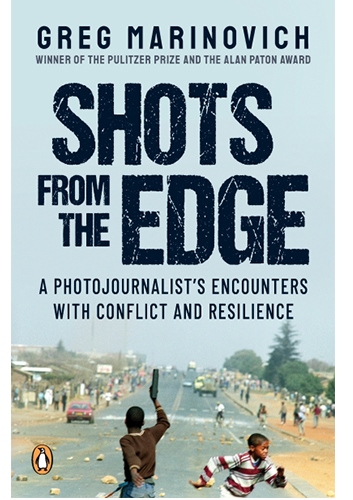 Marinovich’s subtitle offers resilience as well as conflict. It is true that somehow many do survive their (passive) part in the conflict with dignity and fortitude. But for the most part these are tales of unredeemed suffering, testifying mainly to the bloodlust of humans, when hatred, whether xenophobic or intra-ethnic, is unleashed and validated in the name of some ideology, belief, often superstition – and this is as true in South Africa as in Angola, Mozambique, Saudi Arabia, Uganda or Somalia.

The only constant seems to be the relentless violence visited by groups of people upon other groups, or even within their own group, upon wholly irrational grounds. Thus, in the horrendous Somali civil war, “Somalis discriminated not on the colour of a person’s skin, but on the softness of their curls – or, as the locals put it, Bantus had hard hair while Somalis had soft hair”. In country after country, ethnic differences that would be invisible to an outsider form the rationale for large-scale exterminations.

Sadly, the supposedly quintessential African quality of Ubuntu is not much in evidence, in Africa or elsewhere.

One moving exception is the case of the two Sierra Leonean friends who have been left, by the boy soldiers terrorising the area, with one hand between the two of them, “their friendship giving them strength to persevere through the pain, the fear”.

Another instance of some vestige of human fellow-feeling is in the soldiers at a South African border post who offer their rations to feed the starving child of a Zimbabwean refugee, the officer in charge admitting to having “abused refugees in the past” until “the shared humanity of the Zimbabweans was suddenly made clear to him”.

But these are the rare exceptions to a near-universal spectacle of brutality and bloodshed. Yet, perhaps understandably, Marinovich tries to find some consolation in the very fact that modern means of communication have made possible the dissemination of the knowledge of these atrocities: “it is this exhausting forward thrust of technology… which brings a measure of hope to these catastrophic times.

Even as we are swamped by information and pictures ... and as sad and upsetting as such pictures and information can be, they do what journalism is meant to do. We cannot deny that we know what is happening, and knowledge is power.”

This seems to me a somewhat desperate consolation, given the uses to which “the forward thrust of technology” has also been put, especially in the form of social media. Ignorance and prejudice, as much as knowledge, can thrive on the internet. If I were to find in this book some shred of hope, it would rather be in the fearless, indeed reckless, pursuit of the truth, appalling as it mostly is, by people such as Greg Marinovich, and the honesty with which it is reported, for the rest of us to deal with as we dare.

In her novel, Double Vision, which is partly about the moral complexities of war reporting, Pat Barker uses as her epigram three of Goya’s captions to his terrible series of prints, Disaster of War, in which he recorded the atrocities of Napoleon’s troops invading Spain: “One cannot look at this. …I saw it… This is the truth.” And that seems to be Marinovich’s rationale too: much as he recoils from what he witnessed, the fact that he saw and that it is the truth is a kind of moral compulsion: in our post-truth world, it is more crucial than ever to bear witness to the truth, however hopeless the project may seem. As another of Goya’s captions asks: “What more can one do?”

Or, as Marinovich concludes his book: “To be there and to be truthful is, sometimes, just enough.”