From being the enfant terrible of British writing, producing such shockers as The Comfort of Strangers and Black Dogs, earning him the soubriquet Ian Macabre, McEwan has become something like the grand old man of British letters, producing 17 books, winning multiple awards, including the Booker (for Amsterdam, one of his least convincing novels), with at least five, by my count, of his novels being adapted for the screen. 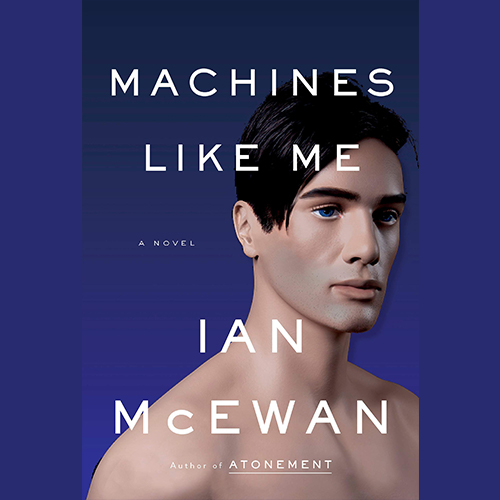 Well, here’s the android, called, of course, Adam, “the first truly viable manufactured human with plausible intelligence and looks, believable motion and shifts of expression” just before having life streamed into him through a 13-amp socket: “He was compactly built, square-shouldered, dark-skinned, with thick black hair swept back; narrow in the face, with a hint of a hooked nose suggestive of fierce intelligence, pensively hooded eyes, tight lips…” He is also “uncircumcised, fairly well endowed, with copious dark pubic hair”, but “not a sex toy”, though “capable of sex”.

Adam’s owner, master, “user” (a term he rejects) is Charlie Friend, a somewhat feckless 32-year-old day trader, who has bought Adam with the proceeds of the family home he inherited. He is not quite sure what he wants Adam for (the Eves were all sold out), but he studied anthropology at university and has a layman’s interest in the intersection between technology and humanity.

The novel is set in an alternative 1980s London: Margaret Thatcher is in charge, but having lost the Falklands War, is about to be ousted by Tony Benn, the left-wing Labour politician. Another important counter-factual detail is that Alan Turing, the code-breaker of Bletchley Park, in real life publicly disgraced and hounded to his death, in 1954, for “indecency” (homosexuality), is, in 1980s London, a national hero and expert on Artificial Intelligence. (In the real world, Turing has just been honoured by having his face adorn the British £50 note.)

Charlie’s fascination with his new “ultimate plaything” is shared with and by his upstairs neighbour, Miranda, a 22-year-old graduate student, beautiful, easy-going, sexually available, but disconcertingly disengaged, “with something alluringly secretive or restrained about her.”

So in tandem with wondering what makes Adam tick, Charlie is faced with the age-old question of “What do women want?” And is it just chance that Charlie’s discovery that he is in love with Miranda coincides with Adam’s arrival and awakening? The two strands of his interest, not to say obsession, become inextricably intertwined when Adam makes love to Miranda, apparently at her behest. As Charlie describes it, with admirable detachment, “my situation had a thrilling aspect, not only of subterfuge and discovery, but of originality, of modern precedence, of being the first to be cuckolded by an artefact.”

Adam, though, is genuinely repentant and declares to Charlie, that, though he pledges never to do so again, he is in love with Miranda.

Summarised like this, the novel may sound like a kinky sex comedy, and it certainly has some comic aspects. But, if anything, it is over-weighted with philosophical introspection and scientific detail (McEwan seems to have made a thorough study of the questions and conundrums surrounding Artificial Intelligence), and it takes a while for the plot to get going. Miranda, it turns out, is haunted by a traumatic experience in her youth, and fears that her secret is about to catch up with her in the person of a man she was instrumental in sending to prison as an act of revenge. Adding to the human interest the novel may have lacked up to this point, is four-year-old Mark, whose shiftless mother dumps him on Charlie’s doorstep.

Now, with Adam as faithful and somewhat loquacious bodyguard, the unconventional little household sets out to deal with the messy human past, comfortably funded by Adam’s expert playing of the stock market. But news starts trickling back to Adam that his “siblings” (of which there were 24) are one by one starting to malfunction, even committing suicide. He himself, though, feels “hopeful” – perhaps that in his family situation he has found a reason to survive in a world of imperfect humans. And he “solves” Miranda’s situation with impeccable but relentless logic: he has not been programmed to make exceptions for morally ambiguous situations. As Turing explains to a bereft Charlie: “We don’t yet know how to teach machines to lie. And what about revenge? Permissible sometimes, according to you, if you love the person who’s exacting it. Never, according to your Adam.”

It is perhaps not original in this kind of fiction (think Frankenstein), but affecting nevertheless, that the “person” we feel most sorry for in the end is Adam. As Turing says, “He was sentient. He had a self.” It is part of McEwan’s achievement to make this a plausible claim. And to give it shape in his impeccably crafted, inventively analytical prose. It seems unlikely that a robot is going to write anything to rival or equal it any time soon. But then…