Fighting for the dream

As I sit down at my computer to write this review, today’s Daily Maverick bounces on to my screen to announce: “The Presidency is rapidly losing momentum”. “Ramaphosa,” Ferial Haffajee declares, “is losing an ANC factional war to the party’s Secretary-General, Ace Magashule”.

Following within minutes of my putting down RW Johnson’s latest book, this assertion is dispiriting, to say the least. His book-length-analysis is, of course, more nuanced than a one-page op-ed could be, but Haffajee’s one-paragraph characterisation of the state of the nation could stand as a summary of his book:

“South Africa is again tenuously balanced between the imperative to become a capable state versus the needs of the patronage state to keep systems malleable and institutions weak;[…] between a growth-focused economy versus an economy characterised by radical and populist posturing which is a veneer for continued looting.” 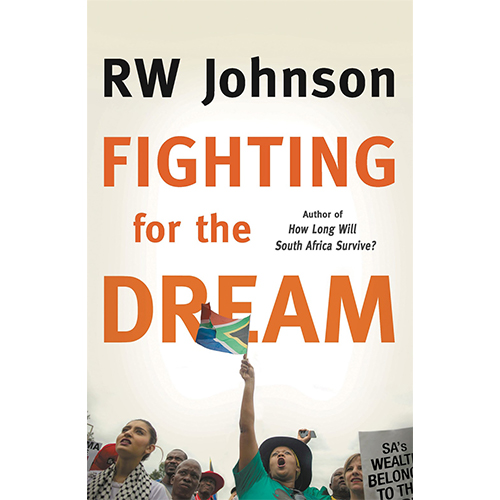 Johnson’s analysis of the South African political scene is an extended weighing-up of that balance, which he, as much as Haffajee, sees as a conflict between populist irresponsibility and mature, even austere economic discipline. His analysis aims to flesh out these abstractions with concrete instances, and also to locate the sources of the present dysfunctionality in the recent history of the ANC. He does not commit the all-too-easy simplification of blaming it all on Zuma: he shows that, disastrously corrupt as the Zuma regime was, the decline from democracy to kleptocracy started much earlier, as early, in fact as the golden years of Mandela. Though Mandela was not himself corrupt, it was on his watch, for instance, that the infamous arms deal was hatched and executed. And, perhaps more cripplingly, “Mandela’s most damaging legacy [was] an overlarge and massively overpaid and underskilled bureaucracy.”

This “bureaucratic bourgeoisie” is, in Johnson’s reading, the engine and benefactor of the corruption that Zuma did so much to perpetuate: “Because it does not itself generate wealth, it is inevitably parasitic and can achieve its goals only through patronage and corruption.”

Johnson’s market-based analysis is particularly severe on what he calls “the dysfunctional and largely incapable group”, the civil service, under-skilled and over-paid: “by 2018 there were well over  2.2 million civil servants, earning average salaries of R338,000 per year. …The salaries of this group absorbed over 14% of South Africa’s GDP.”

One of the more contentious aspects of Johnson’s analysis is his unfavourable comparison, in this respect, of the present dispensation with the apartheid regime: “That old ruling class had many sins to its name but over the 84 years since Union in 1910 it built a formidable infrastructure, a developed economy and a series of powerful and efficient institutions”. This is not too far from Helen Zille’s hysteria-inducing tweet that colonialism was “not only negative”, and no doubt Johnson’s comment will evoke comparable outrage – except that such outrage would serve nobody’s political purpose, as Zille’s did for the ANC and EFF.

But if the bureaucratic bourgeoisie is the long-term structural threat to “the dream”, the more immediate menace is, as Daily Maverick has it, “the State Capture ghouls circl[ing] around Ramaphosa’s wagon”  – more specifically the super-ghoul Ace Magashule.

Johnson, writing in the aftermath of the 2017 leadership election, in which Magashule won a wafer-thin and probably rigged majority as secretary general, argues that in not taking a stronger line against Magashule’s “victory”, Ramaphosa had queered his pitch in perpetuity: “Accepting Magashule was far too high a price; it could well mean that Ramaphosa would never be able to achieve control of the ANC…” This dire prediction is now being fulfilled, with even the Public Protector circling the wagon.

Johnson offers an interesting and perhaps encouraging perspective on the apparent ascendancy of the ghouls: before the 2017 election, he, along with the eNCA television network, did an extensive survey of attitudes among the ANC electorate. It transpired that in every region apart from KwaZulu-Natal, Ramaphosa had a clear lead over Zuma’s proxy candidate, who was of course his ex-wife: Ramaphosa’s “support among the various African language groups was everywhere substantial and widely spread”.

This suggests that, for all the posturing of the Zuma-Magashule faction, Ramaphosa has the overwhelming support of the electorate. This, though, is not as cheering as it should be, since Johnson has also shown that ANC elections are decided not by the will of the people but by the machinations of the likes of the Premier League: “the Free State, North West and Mpumalanga were all de facto fiefdoms where the premier’s will was enforced by every kind of administrative stratagem, rigging or by main force if necessary.”

Johnson brightens his dark analysis with some suggestions as to how South Africa could be dragged, if need be, kicking and screaming, out of its quagmire of inefficiency and corruption. I summarise his main recommendations by quotations in point form:

• “liberalisation of the labour laws”;

• “Probably all the SOEs should be privatised, and preferably split up so as to create competition”;

• “to make South Africa as internationally competitive as possible… all taxes on investment would have to go”;

• “All Australia’s main cities lie on the coast, and so should South Africa’s”;

• “…granting individual freehold property rights to residents of the former Bantustans …cutting back the power of the chiefs to grant land”;

• “What is needed is a comprehensive programme to develop the eastern seaboard”;
• “…higher standards of admission to tertiary institutions”;

• “the time to request a bail-out from the IMF has already arrived”.

It is beyond the scope and competence of this review to pronounce on the practicability or otherwise of this agenda, other than to note that it is breathtakingly ambitious. Indeed Johnson concedes, with massive understatement, that “to write as I have above is to break a very large taboo, and I would not expect what I say to be popular, or even acceptable.”

But if “fighting for the dream” is to be taken seriously, we must start with a dream. Or live with the nightmare.