Bitcoin billionaires: A True Story of Genius, Betrayal and Redemption

In 2009, author Ben Mezrich wrote a book named The Accidental Billionaires, chronicling the unholy birth of Facebook, the rise of Mark Zuckerberg, and the fall – well, the stumble – of Tyler and Cameron Winkelvoss, the identical twins who believed that Zuckerberg had stolen the idea for the social network from them.

Mezrich’s newest book is also about billionaires, but not accidental ones, you hear? It’s very important that you understand that Tyler and Cameron were millionaires but now they’re billionaires – nine zeroes, not six – and they did it all by themselves, except for a bunch of other people. Also they might be geniuses, and they were betrayed, but they’ve found redemption. Got it? Billionaires. Genius. Betrayal. Redemption.

Just to be safe, Mezrich has put all of those in the title: Bitcoin Billionaires: A True Story of Genius, Betrayal and Redemption. But this book’s real title, booming off every page of this entertaining but entirely transparent bit of literary fluffing, is really “Nyah Nyah Nyah, We Didn’t Need Stupid Facebook Anyway, Mark. Yeah, Mark, How’d You Like Us Now, You Nerdy Poo-Face?”

Of course I’m not suggesting that this book was commissioned by two ultra-competitive billionaires with badly stung egos, or that they paid for the tidal wave of publicity that has launched it around the world. The super-rich don’t operate like that, now do they?

Still, it is palpably obvious that while this account of What The Twins Did Next sells itself as a fast-paced tech thriller, it is, in fact, a very long letter from two very jilted lovers.

Indeed, the author says as much on the very first page, where he opens with a quote from Alexandre Dumas’s The Count of Monte Cristo: “Moral wounds have this peculiarity – they may be hidden, but they never close; always painful, always ready to bleed when touched, they remain fresh and open to the heart.”

Those poor Winkelvoss boys. How will our off-the-shelf, middle-class brains ever understand the immensity of the pain they’ve endured? How can we comprehend what it’s like to take on Mark Zuckerberg and only come away with $500 million for a sort-of idea you maybe kind of had? Oh, the humiliation!

I’m barely exaggerating. Despite taking place in the cutthroat world of high tech and big money, Bitcoin Billionaires is often hilariously star-struck by its two heroes. For example, when they decide to woo a potential partner by inviting him to their Manhattan loft apartment (glam!) full of models (hot!), what strikes the impressionable young hustler is that they look “like something out of Greek mythology”.

But before you think these are arrogant immortals lolling on Olympus, Mezrich assures us that the Winkelvosses are sons of the soil.

Having discovered that Silicon Valley startups will not take their money –they are essentially untouchable there after clashing with Big Brother Zuck – they find themselves facing an existential crisis. After all, if you’re not an angel investor being fawned over for your Facebook settlement money, what are you?

It is a long dark night of the soul, and they have to dig very deep. Luckily for them, they come from a family that has dug deep, literally, into the Pennsylvania mountains. Their father, we are told, “had propelled himself upward from a heritage of hardworking German immigrants, a family of coal miners”. It’s straight out of Zoolander: one can almost hear the twins, delicately coughing into their silk kerchiefs, saying, “I think I’m getting the black lung, Pop.” 40 pages later one doesn’t even dare to imagine the tragi-comic cliché, as Mezrich reports that the twins’ great-great-grandfather arrived from Germany “and promptly died of black lung”. (In case you are worried that the boys in this story might be left as grubby little orphans, the coal dust on their cheeks smeared with tears, be reassured: their father, Howard, never went near a mine, enjoying a long career as an adjunct professor of insurance at the Wharton School, and as a consultant. The only dust the twins ever inhaled was the fairy dust of rarefied privilege.)

Sometimes, however, being a Greek god or being related to people who once did some actual work isn’t enough, and while they’re still mere millionaires they decide to retreat from the rat race to lick their wounds. How will they rediscover their purpose and fire? At sea off the Hamptons, grappling with the elements? Touring the great cities of the old world, where history and culture can slough off the chintzy tat of Silicon Valley? Perhaps a hard, long walk in the Himalayas? Where does one go to renew the soul, if money is no object?

Apparently one goes to Ibiza. On purpose. 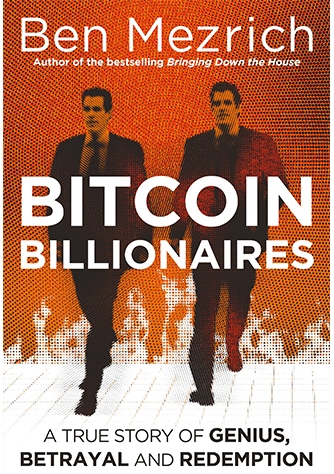 Mezrich tries very hard in this book to portray the brothers as interesting, sympathetic, even visionary people. He does his utmost to convince us that they’re not just 0.1-percenters who’ve surfed a huge wave of money to even more money. If, however, you’ve followed their story since the Facebook days and believe that they are deeply dull human beings, whose conversation would bore you to tears within five minutes and whose idea of a good time is to languish on hyper-kitsch islands with the soul-sick and the aggressively shallow, this segment will not dissuade you.

It is, however, an important one in the rise of the Winkelvosses, for it is in Ibiza that they are first buttonholed by the frenzied believers in a new era for humanity: the wild-eyed, code-crunching prophets of Bitcoin, declaring the death of money even as they ask the twins to hand over quite a lot of theirs.

From there on, Bitcoin Billionaires is your standard riches-to-riches story, as our heroes decide that cryptocurrencies are the way of the future, go on a mad buying spree, and end up owning more than one percent of all the Bitcoins in circulation. Which, its inventors assure us, is a finite figure, because when you invent a currency that lives inside a computer it is entirely impossible to add extra zeroes.

At least, that’s what Mezrich’s cast of characters keeps telling us, and since I almost failed Standard Grade maths in Matric, who am I to disagree? Then again, perhaps that’s how things like Bitcoin work: make something complex enough and Joe Standard Grade won’t see that it’s a Ponzi scheme.

In Mezrich’s defence, however, this book never pretends to be propaganda for Bitcoin: it is far too busy dabbing away at those “moral wounds” Dumas mentioned at the beginning. Mezrich has also clearly seen that there is almost no story to tell here. At best, this is about two very rich, fairly insecure guys who took a bet on a new whatsit, sat on their position until the whatsit became a trend and then a mania, and got fantastically rich. After all the hours of interviews and mountains of documents, Mezrich must have come to the horrible realisation that his subjects were no more remarkable than any of the dozens of people who win lottery jackpots every week. Which is why, instead of trying to stretch a page from Tatler into The Agony and the Ecstasy, he has added a second story: that of Bitcoin itself.

This book-within-a-book is much more successful than the biography to which it is grafted, mostly because Mezrich writes with cinematic flair, is skilled at making meetings about algorithms sound like something out of a James Bond novel, and because he is willing to patronise his reader almost to the point of frontal lobotomy. I haven’t read so much wildly unrealistic, on-the-nose exposition since I was writing it as a desperately earnest teenaged playwright: at times one expects the characters to break off their unlikely conversations, turn to the audience and say, “And so, kids, that’s how Bitcoin works.” 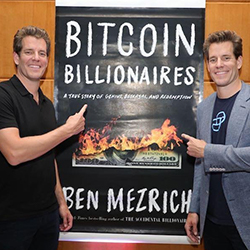 Perhaps the most surreal example of this is when Cameron Winkelvoss explains the “mining” of Bitcoins to new colleagues with a bizarre allegory involving Charlie and the Chocolate Factory. “Charlie is like a miner,” he tells his crew. “And the golden ticket, which will give him a tour of Willie Wonka’s factory, is like the block reward. Now suppose that by searching for this golden ticket, Charlie is also simultaneously validating purchases of candy bars and recording them in the factory’s business ledger – the Willy Wonka blockchain…”

It’s loopy, but it works: one comes away from this passage with jumbled pictures of chocolate-smeared coins, but also a clearer idea of how Bitcoin transactions are endlessly validated – and therefore safeguarded – by an army of number-crunchers competing for a golden ticket. Sometimes pitching your book at a 10-year-old level pays dividends.

Speaking of which, I hope Mezrich has made a large pile of money from this book, if only as compensation for having to listen to so many people talk about their Bitcoin investments.

As for the Winkelvoss twins, well, they remain in our thoughts and prayers. Their moral wounds will never close but at least they’ll always have Ibiza.