The Blackridge House: A Memoir by Julia Martin

Julia Martin’s “memoir” is not really a memoir in a conventional sense. Although the author is very much present in the account, the focus is firmly on her mother, born Elizabeth Smallie, more commonly known as Betty, aged 92 at the time of writing; and the book recounts the author’s attempt to reconstruct a past that is only fitfully present to her mother’s failing memory. (“My memory is full of blotches,” she says, “like ink left about and knocked over.”)

Central to this reconstruction is the attempt to locate, physically, the Blackridge House, on the outskirts of Pietermaritzburg, where Betty grew up. Martin sets out to recover this “small wood-and-iron house” or what remains of it, and from this quest and its ramifications a complex narrative unfolds: not only the fragmented memories of Betty’s childhood, but the colonial history of that part of the country, from the Boer War through the Zulu Wars to the present. The book’s epigraph, from Rebecca Solnit, succinctly sums up this aspect of its construction: “That thing we call a place is the intersection of many changing forces passing through, whirling around, mixing, dissolving, and exploding in a fixed location.”

One of the achievements of this expertly-wrought account is the tracing of that intersection: a meeting of past and present – not only what we call the historical past, but also the more recent past, and not only the present of the care home in which Betty ends her days, but also of the current residents of the area in which the Blackridge House had its being. 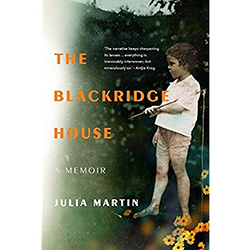 It is a story of a history and a community, over time, intersecting, in Solnit’s term, in a fixed location.

Thus the ordinary details of daily life at Blackridge are, to Martin, also pointers to a historical process invisible to the incumbents of that place and that time. Her mother’s recollection of her and her best friend’s enjoyment of the mango tree in the garden prompts Martin’s reflection on the process that planted that tree in that spot, the process we call colonialisation: “Would it be heavy-handed to say that Betty and Cyril and all the other children with an exotic mango tree in the garden, were ingesting the fruits of conquest and imperial trade?”

It would have been heavy-handed indeed if that were the only significance that Martin could find in this memory of her mother’s. But throughout, the historical context is irradiated by the fitful light of memory, playing on these relics with the warmth of affection and the pathos of loss. The sentiment does not invalidate the sterner perspective of the history of conquest and subjugation, “the business of supremacy turn[ing] to repeated assaults on the environment”, but it humanises it: the agents of change and “progress” are themselves subject to the processes they set in motion, perpetrators and victims both.

Martin’s grandfather, by all accounts a humane individual, was also a soldier of empire, and, in his civilian life, an agent of change, not always for the better: “The fields, the grasslands, and the forests were once again to be laid waste, this time for industrialisation and the factory farms of monoculture.” Indeed, if there is a villain in this book, it is monoculture, with its reduction of the rich variety of natural life to the drab uniformity of plantations and factories. The Blackridge House becomes, through Betty’s memories of it, almost a paradise of rampant nature (“a garden with mangoes and bananas, and wild leafy places of lichen and moss”), though it is itself, of course, a product of the human encroachment on nature.

There is in fact no clean separation between human activity and the nature that it practises upon, sometimes destructively, sometimes constructively. On a visit to the Hoek, once the family farm of her husband, Martin feels in this particular house an organic connection with its environment and its inhabitants: “The house was solid, a live thing made by human bodies and the workings of insects, mice, and birds.”

If, at times, it seems as if Martin is lamenting all human interference with nature, there is a counter-suggestion that all we as humans can aspire to is learning how to live in nature and in harmony with its rhythms – and with each other. “Yet again,” she reports, after being offered help by a stranger, “someone I’d never met before had generously responded to my quest, taken it on.” An unlooked-for result of Martin’s quest is her discovery of a sense of community transcending the confines of family or neighbourhood, –  recognition of a common humanity.

Martin’s quest, then, is more than a search for a particular house: it is the retracing of “the long, long reach of human habitation of the region”, a habitation long predating the white settlers of the nineteenth and twentieth centuries: “an unimaginable long narrative of displacement and continuity in which the brief story of my own family became a single utterance, audible for only a breath.”

If in the larger scheme of history Betty’s story and her daughter’s quest are no more than a “breath”, then through this exquisite utterance of that breath it nevertheless achieves a permanence of its own, a moving testimony to a remarkable woman, and a troubled but loving exploration of a region, a land and its people.