Tiso Blackstar’s asset-stripping chief Andrew Bonamour has struck a killer blow to the media group’s support of its surviving pensioners – 286 of them at the last count.

Their medical aid subsidy is to be terminated at the end of July. No time to appeal; the sternly-worded declaration went out on June 1.Termination payments are derisory. Bonamour has told Brenda Etherington, 77-year-old widow of Graham Etherington, former deputy editor of the now defunct Evening Post in Port Elizabeth, that she will get R59,767. From that, Blackstar will deduct tax before making payment.

Graham Etherington died in March 2017, aged 77. He joined the group when it was still the Argus Group, wrote South Africa’s first wine column, started the country’s first consumer column. He was editor of the Diamond Fields Advertiser in the 1980s and, shocked to discover that many local children were attending classes on empty stomachs, set up a project he called Feed a Child Today.

Etherington’s widow Brenda lives alone in a retirement village in Bryanston. She’s South Africa’s longest-surviving renal transplant patient, having received her life-giving donor kidney 31 years ago, in 1988. Her on-going medication costs amounting to R6,400/month, are paid for by Discovery on her Classic Comprehensive cover. When her R1,357/month Tiso Blackstar subsidy ceases at the end of the month she will have to meet Discovery’s full monthly premium of R5,368 herself – as well as handle Discovery’s expected hefty premium hike in 2020.

Bonamour’s R59,767 enforced payout won’t cover even one year’s medical aid. Indeed, it’s a pitiful amount compared to the settlements reached with 51 Blackstar pensioners who went to court in 2017 seeking the resumption of annual subsidy increases, which were frozen in 2014 (nose215). Bonamour offered modest one-off lump sums to end their post-retirement benefits for good, but secret settlement talks resulted in the 51 receiving payouts ranging from R96,000 to R384,000. The company’s pensioners who didn’t join the action, but sat back expecting to benefit from a victory, were excluded from the offer, much to their fury.

Tiso Blackstar is the publisher of Sunday Times, Business Day, Sowetan and the Financial Mail, along with a chain of provincial newspapers. Blackstar took effective control in 2012, but refused to continue Times Media’s practice of increasing the medical aid subsidy annually to help meet Discovery’s soaring cover costs.

The subsidy had proved something of a millstone to the company. By 2012, with 688 members – 383 pensioners and 305 still working – it was costing the company R274m per year. A cash offer by Bonamour the following year invited members to opt out and run their own medical aids, which reduced the cost to R87m. By the end of fiscal 2018 the liability was down to R29.9m. Now Bonamour is determined to slash the subsidy outlay to zero.

In fiscal 2018 Tiso Blackstar recorded a loss of  R275m, with borrowings running at R90m. There have been retrenchments across the titles, with closure of the tabloid Sunday World in May.

But Andrew Bonamour hasn’t allowed the turndown to hit his own pay packet. Last year the CEO pulled in total remuneration of R11.9m, up a modest R406,000 from fiscal 2017.

The extraordinary bombing of the Tiso Blackstar share price – from R13 back in 2014 to its present R3.20 (at June 14) has been the cause of much speculation. 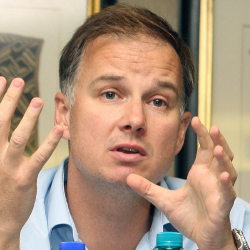 The remuneration committee’s generous award to him last October of 1,192,259 shares under his pet Management Incentive Scheme, too, has potential for profit. The company gave him the shares – valued at R3,338,315 on 26 October 2018 closing price of R2.80 – but under the scheme’s rules they won’t be handed over for three years, and then only if Bonamour has achieved his performance conditions. However, if the share price by then should have recovered to R9 or more… wow – another triple up!

Andrew Bonamour was away and unavailable for comment. The office of group MD Andy Gill requested written questions – but Gill failed to reply to any of the 10 submitted.

♦ As we were about to publish the online magazine we heard that on Thursday 27th June 2019 the asset stripper Andrew Bonamour flogged off Tiso Blackstar’s media assets to that controversial black investment group Lebashe, for just over R1bn.

This explains why the remaining old Times Media hacks still getting the medical aid subsidy have had their subsidies terminated with such indecent haste!