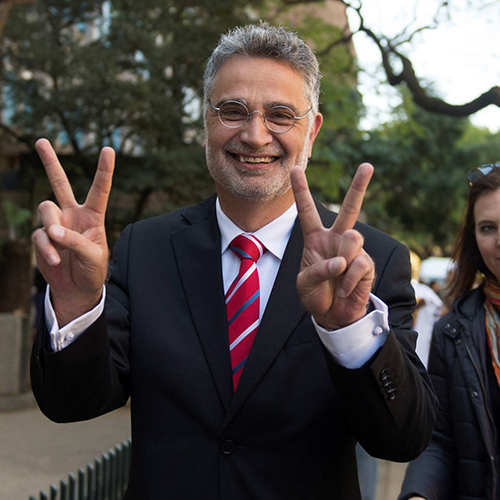 Johann van Loggerenberg writes us a 3,500-word letter of complaint about our reports on the SARS ‘rogue unit’ and his alleged role in it

Your various publications in Noseweek, from issue 223 in 2018 to date, insofar as they relate to me directly or indirectly (online and in print), as well as your publications on Twitter and Facebook and the interview with [Editor] Martin Welz on Radio 702 in this regard refer.

1. All the relevant publications amount to the wilful, unlawful and intentional publication of patently false, injurious, defamatory, misleading and malicious allegations of and concerning me whilst I was employed by the South African Revenue Service (SARS) until February 2015 and thereafter. The harm caused and which is continuously perpetuated extends directly to my family.

I have no intention at this stage to deal with each and every publication in detail herein, and will do so at the appropriate time and forum of my choice. In general:

1.1 In as much as all the publications suggest impropriety, unlawful or illegal actions on my part, these are emphatically denied;

1.2 In as much as all the publications reflect on me after having resigned from SARS and then i) supposed employment, ii) alleged work, iii) purported shares, interests or involvement in private businesses and firms, iv) claimed involvement with official commissions of inquiry, v) alleged interactions with former or current civil servants and political office bearers, vi) alleged “spying”, “surveillance”, “investigations” and “intelligence” and vii) claimed involvement in any manner with any state-owned enterprise, these are emphatically denied [Noted, but see"A bit of a mystery at 313 Rivonia Road" in this issue. – Ed.]

1.3. You rely on “anonymous sources” as centre-pins for the basis of your publications; multiple allegations published are unattributed to any “source”. In certain cases, the author/s of articles are not displayed;

1.4 Facts in complete contradiction to your publications are in the public domain and are easily accessible to you [Please specify which and where. – Ed.];

1.5 The so-called “SARS Sikhakhane panel report”, “SARS Kroon advisory board media statement” and “KPMG SARS report” which you have sought to rely on or justify to one extent or another have all been formally contested as materially flawed in fact and law and these contestations are publicly available to you. [We have on all occasions reported those allegations/reports so contested by you. – Ed.]

Furthermore, they have been thoroughly discredited in many ways. The so-called “findings” of the “Kroon media statement” and “KPMG SARS report” have been disowned and repudiated [as was also reported by us] and both have been admitted as having been the results of substantial and procedural unfair processes and due process failings, including not hearing those pronounced upon or affording them a right of reply. To this end, I have personally sought and received formal apologies from various persons that were involved.

I have done same for several others (and their families) affected by these processes. Several other persons have also received such apologies.

1.6 What you have referred to as portions or parts of alleged “internal charge sheets” emanating from SARS, an alleged “secret file” emanating from the Directorate of Priority Crimes Investigations of the South African Police Service, an alleged “report” to former SARS Commissioner, Tom Moyane in 2014 and a “secret report” allegedly emanating from the Inspector-General of Intelligence – all of which you claim contain truthful, proven, accurate, complete, indisputable and authenticated content (Martin Welz uses the term “factual evidence”) attributed to me (and others), within a context defined by him and Noseweek’s “sources” – are in fact i) wholly incomplete, ii) completely inaccurate, iii) deliberately manipulated and distorted and/or iv)?fabricated/forged and are v) devoid of context, vi) false and fraudulent.

[None of these adjectives – truthful, accurate, complete, etc – appear in the Noseweek reports. “Factual evidence” is referred to only in contrast to “findings” in the KPMG report. All the documents and reports you preface with the word alleged: are you suggesting they are not authentic? Please specify which are, forged, fabricated or false. – Ed.]

1.7 Your publications have in these circumstances deemed it appropriate to disseminate these false and injurious allegations to the world at large whilst at the same time displaying scant regard to the unlawfulness thereof;

1.8 Your claims and suggestions about any engagements by me with members of the media as a SARS official and thereafter are false;

1.9 Your reliance on and publication of documents which form part of an interim court application sought by a Ms Belinda Sheila Gaye Walter in 2014 in relation to my medical records is not only unlawful and illegal, but wholly distasteful. In fact, the application was opposed by me and then withdrawn by the applicant with written undertakings provided to me and my erstwhile employer;

1.10 Your suggestion that I was an “apartheid spy” is false and an extremely dangerous label. You have placed me and my family in harm’s way by doing so. [We did not refer to you as an “apartheid spy”. Jacques Pauw used the phrase in a tweet. We researched and accurately described your history. – Ed.]

1.11 Your references to an erstwhile tiny and rather benign investigative unit and its members at SARS as “rogue” are obnoxious and defamatory of loyal civil servants that have done great work for our nation throughout the unit’s seven years of existence.

[Editor: Dear Reader, you are now just over a quarter of the way through Van Loggerenberg’s letter of complaint. To read the complete letter, click here.It ends:]

Methinks the gentleman doth protest too much. See Letters and Editorial in this issue. – Ed.