It’s people like you which cause climate change! snarls this crabby old cow at the Saturday morning braaifest on the pavement outside the Spar. Such snarl is directed at poor young Krish who’s raising clouds of smoke, she’s looking for a fight with him, such is her weekend sport.

I’ve just seen her snarling inside with the girl at the takeaway counter, in the matter of whether there was too much or too little of something or other in the chicken curry. Girl had made the obvious response: If you don’t like it you can spit it out, pointing out that it was not she who had cooked the curry anyway. I want to speak to the cook, said Old Cow. Well you can’t, said Girl, they took her to the hospital. From eating the curry, said OC with heavy sarcasm. No, said Girl with equal aplomb, with shattered neffs from customers’ abuse. OC thereupon ground her teeth something horrid and headed for the manager. Manager saw her coming, he’d seen her coming before, now he ducked into the Gents where he splashed water on his face and combed his hair and braced up and sat for some minutes on the toilet seat in a Yoga sort of way to focus his mind against the shattered nerves.

So here’s young Krish then, new boy at the Glenwood Spar, and it’s his satanic job to keep the pavement hellfire at ju-u-ust the right temperature for the Sat Morn Seething of Flesh. It fair fills you with unspeakable carnivore greed, I tell you, when the prevailing s/westerly wind wafts the delicious greasy vapours and bitter boeries smoke clean across the freeway and three city blocks along the Berea and into your open window. Well, mine, that is. No poensy chefs’-school graduate round here, thank you, this boerewors is made by ’n ware V-twin 1100cc Boer name of Rhino Retief, according to an ancient recipe brought to Natal in 1842 by his ancestor Piet. Rugby grub, this, man! They say ou Rhino minces his meat with his hands.

Hmmm? say Krish, and looks over his shoulder to see who is causing the climate change. Yes, you! says Old Cow, pointing. What sort of carbon footprint will you leave here today? Krish looks under his tekkies to see if maybe he’s trodden in some dog’s doodoo. The salivating queue shuffles and grumbles. The little pharmacist lady from the chemist shop says Four boerewors rolls, please, with mustard and tomato sauce. 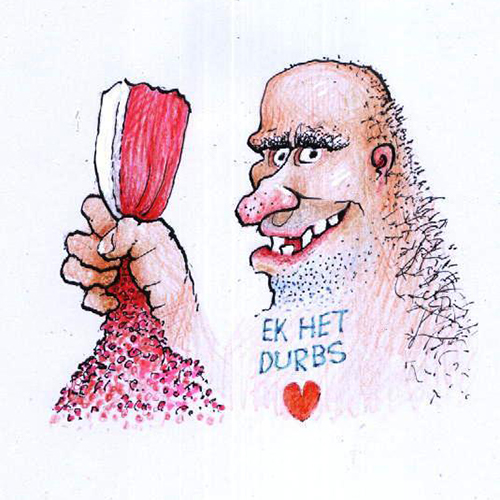 OC glowers grimly at her. Yes, and you too, says she, prodding the air with her forefinger, you support all this carbon pollution of the air and go against the Balance of Nature!

Hundreds and hundreds of millions of years ago, says Pharmacist Lady whilst her boeries is browning, when there were just tiny little bits of life, hardly any in fact and that only in the sea, at that time the atmosphere was full of carbon gas, dense and deep, and there was no oxygen in the sea or air. Then slowly slowly for a billion years or so bacteria called stromatolites in the sea filled sea and air with oxygen and plants came along, just greenish sticky stuff on the rocks, but after hundreds of millions of years growing nice green leaves on ferns and great big trees, and they took the carbon out of the atmosphere and made it part of themselves and pumped the air full of oxygen. So when they died and slowly got buried they took all this carbon with them, and after another few hundred million years all the tree trunks and leaves and compost turned into coal under the ground. Then a certain Mr Watt came along and invented the steam engine and we hauled all the coal out of the earth again and burned it to drive all the pistons and generators and things and return all the carbon into the atmosphere.

Old Cow scowls hideously. I hope you are the first to go extinct, says she. Nono! Pharmacy Lady replies, first must come the various beautiful beasties whose hides and horns rich people lust after. Then again in dinosaur times we got hit by a sixteen kilometre rock shunting across the cosmos at 40,000kph which left a 200km hole in the ground and but a few titchy little mouse species and certain ancient crocodiles. Maybe next time we mammals will disappear and give the goggas a chance.

Maybe in 100,000,000 years cockroaches will be having a braai right here with roachwors handmade by Roach Retief. Maybe we folks will have gone kaput and the rats will now get their break, plenty smart, hey, maybe they’ll get really cultured with time and write music like Beethoven or wriggle their fannies on a stage with electronic music.

It’s people like you which cause unrest! cries Old Cow.