Sebastian Faulks has often in his fiction recreated past eras: the First World War in Birdsong, the Second in Charlotte Gray, the period in between in The Girl at the Lion d’Or, the Cold War in On Green Dolphin Street, the early twentieth century in Human Traces, Cambridge in the seventies in Engleby. 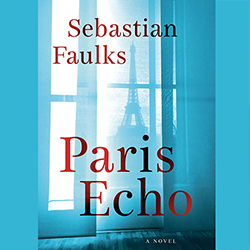 This new novel is set in contemporary Paris, but once again has strong links with the past: one of the main characters, Hannah, is an American academic researching the experience of women in war-time Nazi-occupied Paris; this is her second visit to the city, having studied there a decade earlier. The other, a 19-year-old runaway Moroccan named Tariq, by contrast, is entirely ignorant of the history of the city he finds himself in: he doesn’t know who De Gaulle was, and doesn’t realise that Paris was occupied by the Germans during the Second World War.

More or less by accident he becomes Hannah’s lodger, and through her he absorbs something of the rich texture of the city. But it is central to Faulks’s method and theme that the city he gets to know is not tourist Paris, not even the historical Paris, but the unknown Paris, the banlieues, where the immigrants and undocumented aliens survive as best they can, in makeshift shelters and squats. After a brief sojourn on the floor of an apartment in one of the tower blocks of the Olympiades, Tariq finds a job in the run-down Saint-Denis area, which “looked like it was home to people they didn’t want inside the city walls”, people from Africa or the Middle East, “from the bits that had been put on the map by famine or beheadings”. Tariq’s job is in the Paname Fried Poulet, a down-market version of Kentucky Fried, run by two expatriate Algerians, who instruct him in another aspect of French history, the brutal France-Algerian war and the atrocities committed by both sides: what one character calls “the darker part of French colonialism”.

As in his other contemporary novel, A Week in December, set in London, Faulks is fascinated by the city’s network of underground railways. In that novel, London’s Circle Line becomes the ruling metaphor uniting the various characters; here it is the Parisian Métro. Indeed, Faulks uses as one of his epigraphs Kafka’s statement in his diary that “The Métro furnishes the best opportunity for the foreigner to imagine that he has understood the essence of Paris”.

Faulks is clearly, through exploring the historical connections evoked by the Métro, trying to come to terms with “the essence of Paris”, a city he evidently knows intimately. Through the alternating narratives of the knowledgeable Hannah and the uninformed but receptive Tariq, the history behind the rich variety of station names is unpacked. “These Métro stations, eh?” Tariq exclaims. “What names! Barbés-Rochechouart. What a mouthful!” (The chapters are all named after Métro stations.)

The city that emerges from Faulks’s evocation is, as expressed in another of his epigraphs, this time from Baudelaire, a “teeming city… where daylight ghosts confront the passer by”; that is, a city in which the past remains to remind the passer-by of a history he or she may not even have been aware of, “the great world of the past – of injustice, of vanished, valuable lives”.

Largely through Hannah’s research into the testimonies of women of the period, some of which are rendered verbatim, the novel also serves to puncture the illusion that all Parisians were secret Resistance fighters. On this showing, most Parisians backed whichever side they thought was most likely to win, and collaborated, either actively or passively, with that side. (“Change horses, back the winner noisily and cover up your false start. Then deny you changed and keep on denying it until the clamour dies down.”)

For all their differences, Hannah and Tariq share one quality: the ability to see ghosts. Indeed, they see some of the same ghosts, of women who lived in Paris during the German occupation, and find themselves at times in wartime Paris. Whereas this can still just pass as plausible in Hannah’s case, since these are the women whose recorded testimonies she’s been listening to, it’s more difficult to ascribe a realistic origin to Tariq’s visions.

Perhaps we should just accept the ghosts as Faulks’s somewhat clumsy venture into fantasy fiction, rather like David Mitchell in The Bone Clocks and Slade House. I found the device an irritating distraction in Mitchell’s otherwise highly crafted realistic fiction, and here, too, the ghosts add little to the gripping enough realistic surface. To my mind, the notion of the presence of the past is strongly enough dramatised by conventional means not to need supernatural aid; but perhaps other readers will be more amenable to such aid.

To give this evocation of the past a contemporary twist, Faulks grants both his protagonists a non-historical interest: in Hannah’s case a wary relationship with Julian, a lecturer she got to know during her previous sojourn; in Tariq’s, a hitherto unconsummated passion for one Laila in his native city of Tangier. It is probably not too much of a spoiler to reveal that both these relationships develop satisfactorily, if slightly perfunctorily. The novel’s strength lies not here, but in its minute evocation of a city in which the past remains a living presence.  It will come as a revelation to people who think they know Paris.