In August last year Noseweek exposed the shocking practice that non-compliant Toyota Quantum fake minibus taxis – which were in fact converted Toyota Quantum panel vans – had been allowed to bypass the safety standards and specifications that are compulsory for any other passenger vehicles on South African roads (nose226).

Noseweek’s source, former Absa banker Hennie de Beer, had compiled evidence of no fewer than 165 major road accidents involving illegal Quantum panel-van taxis – until he was blocked from accessing the website on which the accidents were recorded. In 2012 De Beer took his evidence to the then Public Protector Thuli Madonsela, who started the investigation and handed it over to her successor, Busisiwe Mkhwebane. 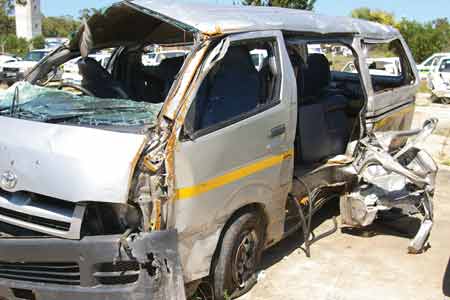 De Beer had claimed that structurally defective and non-homologised Toyota panel vans were modified by the MIBs (manufacturer, importer, builder) and converted to taxis, despite the fact they were not safe for that purpose nor did they meet safety regulations, national standards and requirements. They should never have been permitted to operate as taxis, he said.

De Beer also alleged that despite having been warned of the scheme in 2005, banks and other taxi financiers continued to finance these vehicles knowing they were dealing with unwitting clients. Furthermore the Department of Transport had continued to illegally register these vehicles as minibus taxis that were permitted to carry up to 16 passengers, despite issuing registration certificates stating that they were only allowed to carry three persons as a panel van.

These shameful acts of negligence resulted in numerous deaths and countless incidents of serious injury.But nobody seemed to care, least of all Toyota, a world-renowned company that relies on its reputation as a manufacturer of reliable vehicles.

At the end of March De Beer, whose investigation took more than ten years, was vindicated when the Public Protector Mkhwebane released her report, which called for those implicated to be prosecuted. She found that 2,353 illegally converted panel vans were operating as taxis on South Africa’s roads.

The report made damning findings against the Department of Transport (DoT), Toyota South Africa Motors (TSAM), financial institutions and the National Regulator for Compulsory Specifications (NRCS):

• The evidence… demonstrates that, although the Department of Transport took some action, it was ultimately not efficient and effective to ensure the safety of commuters from injuries sustained when these vehicles are involved in accidents.
• The Department of Transport did not protect taxi owners from purchasing these vehicles
• The Department of Transport was warned about the vehicles in 2009 but failed to ensure they would be impounded and taken off the roads. It was only in 2018 that steps were taken to remove them from South African roads.
• The Department of Transport conceded that frontline staff at licensing offices had manipulated the e-NaTiS system for fraudulent activities.
• The NRCS failed to take effective and efficient steps to ensure that all MIBs comply with the compulsory specifications of the NRCS Act. The NRCS was advised by Toyota South Africa of the practice but failed to take steps to stop it.
• The South African Bureau of Standards (SABS) failed to conduct adequate quality assurance tests to ensure that the converted Quantum panel vans were safe as commuter vehicles.
• Toyota South Africa became aware of the practice in 2005 and, except for warning its dealerships in writing, it failed to take any practical steps to stop their vans being modified to look like taxis, despite the fact that many accidents involving these vehicles “had been fatal”.

To redress what the report calls gross negligence, undue delay, improper conduct and maladministration, the Public Protector demanded that the Minister of Transport, Blade Nzimande, take urgent steps to update its records of illegally-converted taxis and reconcile a database of vehicles that would be due for scrapping.

The director-general of the department of Transport was advised to take urgent steps to ensure, through surveillance and monitoring, that there would be no converted Toyota panel vans carrying passengers on South African roads.

Mkhwebane ordered the CEO of Toyota South Africa to take urgent steps to consult with the Minister of Transport to address the problem and assist in the identification and removal of the vehicles from the roads.

All affected taxi formations were told to take urgent steps to cooperate with the Department of Transport and assist in finding a lasting solution to the problem to minimise further loss of lives.

In conclusion, it is worth noting that, were it not for the efforts of one man, ex-Absa employee-turned-whistleblower Hennie de Beer, the killer fake taxis might never have been exposed.

Noseweek looks forward to finding his name on the President’s next honours list.