A Ladder to the Sky

John Boyne’s new novel, his eleventh, has met with such near-unanimous acclaim elsewhere that I hesitate to air my opinion, which is that it is contrived, unconvincing and not very well written. It does, though, have a certain compelling quality, not unlike a mediocre Netflix series, and I finished it, not without enjoyment, in two sittings.

The central character, then, one Maurice Swift, is a would-be-author and a sociopath – and it is part of Boyne’s point, I think, that those two identities all too often coincide. When we first meet Maurice, he is a waiter in a Berlin hotel, and we see him through the infatuated gaze of an elderly successful novelist, Erich Ackermann, who, responding to Maurice’s flattering interest and his beauty, takes him under his wing, thus becoming the first of Maurice’s victims. 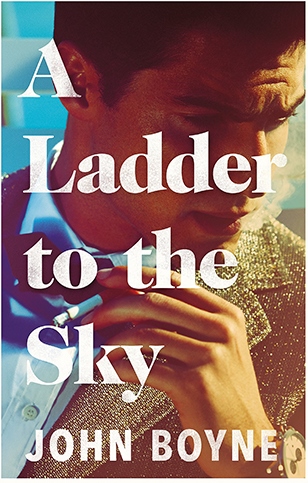 Maurice’s problem is that, much as he wants to write, he can’t really come up with a plot, and thus has to steal one. Thus he extracts from Erich, not very subtly (and not very plausibly), the story of his youth in Nazi Germany, and uses that story as the basis of his first, highly successful, novel and also as a means to ruin Erich’s career.

Having destroyed and rejected Erich, Maurice moves on to another elderly and successful gay author, Dash Hardy, whom he also discards once he’s got from him what he could.

There is an entertaining interlude in which Maurice, accompanying the infatuated Hardy, visits Gore Vidal on the Amalfi coast. This section, centred on the obsessively name-dropping Vidal (“Greta Garbo slept in that bed once …So Did Bettino Craxi. Nelson Rockefeller. Princess Margaret… Paul and Joanne”), is the liveliest in the novel: Boyne does the bitchy perceptiveness of Vidal very well, and it helps that Vidal is the one character who sees through Maurice – it being one of the weaknesses of the book that an implausible number of people fail to see what an appalling person he is.

The third section, set some years later, is narrated by Maurice’s wife, the up-and-coming young novelist, Edith. We gather that she has just published a very highly regarded novel, whereas Maurice’s career has been in the doldrums after the failure of his second novel. The young couple are now living in Norwich where Edith is teaching creative writing. Much is made of a loose railing on a staircase that Edith repeatedly asks Maurice to fix… No prizes for guessing where this ends up. Like many other outcomes in this novel, the reader spots it long before the oddly obtuse characters do. Exit Edith, leaving behind a brilliant novel, which Maurice publishes as his own, to great acclaim.

When we next meet Swift, in another Interlude, the first section of the novel narrated from his point of view, he is living with the son that we have repeatedly been told is all that he wants, other than fame and riches. Since we are informed quite early on that the boy has an asthma nebuliser, we guess, accurately as it turns out, that this is the Return of the Loose Stair Railing. Swift is now the editor of a literary magazine, where he spends his time mining rejected fiction submissions for plots to use in his own novels.

Moving to London after the death of his son (that nebuliser!) Maurice is on the skids again, but regains something of his old flair and duplicity when he is approached by a young man who, flatteringly, wants to write a biography of him, and who eerily resembles his dead son. The young man’s father happens to be an editor at a leading publisher, and Maurice foresees a return to the limelight. Over several meetings, he becomes ever more dependent on the young man… and the rest is as predicable and as implausible as almost everything else in this novel.

To say that the novel is unbelievable is perhaps to miss the point that this is just a very dark satire on the nature of literary ambition, and as such was never intended to be read as a realist novel. Still, it is very much rooted in the recognisable details of its various locations (Boyne is clearly a welltravelled man), and the implausibility of the plotting bumps up against the realistic surface of the story.

As for the writing, it is flat and often careless: nothing a good editor could not have fixed, but here Boyne has not been blessed with one. His syntax is often lame, with long sentences joined with a series of “and”: “I sat alone in the bar later, lost in my thoughts, and when Maurice rejoined me he had taken a shower and smelled of soap, his hair a little damp on his head, and this was exhilarating to me”). He has little sense of the shape of his sentences, inadequate punctuation at times leading to unintended ambiguity (“he watched as a car began to ascend the hill and let out a deep sigh”), and dangling modifiers leading to nonsense: “Uncomfortable with speaking German, …an actor had been hired to read a chapter of my novel.”

Still, I am in a minority here. Read the novel by all means: statistically, you are likely to enjoy it.