Grammaticabobble rammed down our throats

I suffered sore dismay at the age of ten-or-so upon learning that language was not for pleasure, it was for discipline. Discipline such as would make one an example in Natal, British Empire. A dreadful teacher appeared with underclothing such as would make one believe she had but one large central buttock and no place for a poephol as expected on a low-class person. She was now going to teach us not to speak like low-class persons, like colonials, but to disassemble everything we were about to say and quickly reassemble it as a proper grammaticabobble sentence. But you had to do this fast otherwise people would perhaps think you were a low-class person. 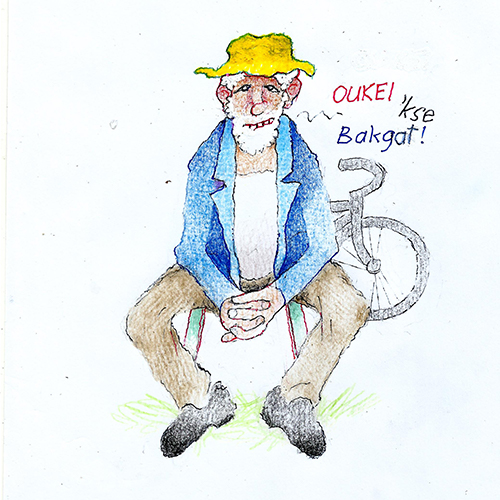 I tried it on my ma for homework. Bloody hell what are you talking about? said she, placing the preposition at the end of her sentence, I’ve got to cook the supper. My sister took to picking fleas off the cat after five minutes and eventually I just chugged to a standstill like an old car with bad spark plugs (there’s a simile for you, now). Later in life it struck me that this education must have happened to Henry James too, Master of the Subordinate Clause, who could ramble through an entire page before coming to the main clause.

Well I supposed analysis was okay if you wanted to be anything in the Empire, though you could betcha life on it Victoria Regina spoke English more like Bismarck than James. But what was just not at all okay was that this posh thing was happening to Afrikaans too. Back in my earlier days in Pretoria you could speak to anybody in Afrikaans, it was spoken a dozen different ways, I mean was it surely a living language, hey? My ouma spoke it with a Dutch vocabulary and a Klein Drakenstein Kaapie accent and her manservant with everything Venda, even in the family kitchen you could see a new language was growing.

But in official places it had been declared an Official Language, and bejasus official people saw to it that it was going to become one: posh, fixed, dignified like Miss Buttock’s English. Back of folks’ minds was the realisation that this had been the language of slaves, it was the Creole spoken between slave and master way back in the Dutch colonies in South East Asia, and they’d brought it to the Cape. It had the guts of history and movement in it. But all that was now going to change by declaration; they got hold of a lot of fairly mediocre literature and declared it to be great, and behold! a brand new White European Man’s Language! Afrikaners were now very dignified, so all we had to do was fix the grammar, nail it to the floor so nobody could move it, nobody’s going to get away with being low-class in this our nice new culture.

I remember some years ago in Namaqualand where I espied an old bruin mens sitting on his stoep with his bicycle leaned against a pole, and engaged him in quiet conversation. Oom, said I after a bit, what does Oom think of his language these days? Nee, seg hy, ek hou nie van daardie Oxford Afrikaans van Pretoria nie. How’s that for a metaphor, man? It pleases me these days that so many genuine Afrikaners show genuine relief that their language is back in the mouths of common Bruin Mense and it’s starting to go Creole again.

English, dignified? Come on, man, English derives from the Creole language of Chaucer, remains a bit Creole to this day, that’s its strength. Common Anglo-Saxon subjects had no access to the posh French of the Norman court after the 1066 invasion, see, just handy bits from the world of master/servant, but soon enough the rulers found the new language of the ruled more expressive than their own and voila! Give it a couple of hundred years and what do we have? A whole new language, English, and Chaucer, that’s what. Give it a couple of hundred years more and what do we have? That’s correct: Shakespeare. Then a further few hundred? Why, Us…. oops! I mean We. And where are We going? Hell, I don’t know, and one shouldn’t want to know, language has its own momentum, unbridled. And if it’s not for pleasure, forget it!

P.S. So you thought the two main languages of South Africa were isiXhosa and English, didja? Well they’re isiZulu and Afrikaans. Look that up yourself.