Ten rules for writing your own cheque

I imagine most authors, even the most high-minded, secretly harbour the fantasy of producing the bestseller that will convert all that high-minded labour into hard cash. Being no exception to this pathetic trend, and finding on my desk a novel by John Sandford, who by my count has to date produced 50 highly successful novels, I’ve opted to use this review to analyse, for myself and other aspirant millionaires, the requirements for a Lucrative Career in Crime Writing. Based, then, on my reading of Holy Ghost (I have not read the other 49), I have devised the following Ten Rules of Crime Writing:

1. Establish a brand. Holy Ghost is announced as ‘a Virgil Flowers novel’, calculated to set the pulses racing of the readers of the ten previous Virgil Flowers novels. Virgil Flowers is the Sherlock Holmes, the Hercule Poirot, the Miss Marple, the Miss Smylla, the Bennie Griessel of crime-writing, and his name is instantly recognisable to a lucrative number of the faithful. It’s like Marmite. (Virgil’s superior, Lucas Davenport, has spawned 29 novels.) 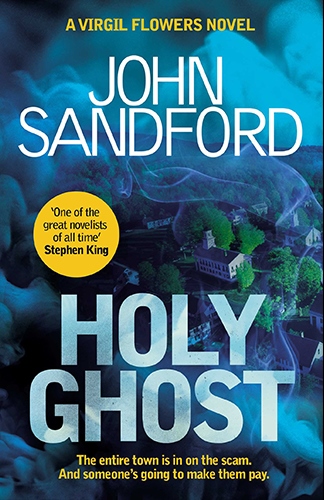 2. Shout! Get someone better known than yourself to tell the world that you’re almost as good as he is. The Shout in this case comes from Stephen King, who calls Sandford “One of the great novelists of all time”, which puts him right up there with Tolstoy and Dostoevsky, and perhaps even with Stephen King.

3. Invent a protagonist that your readers will want to spend time with, an ordinary kind of guy with ordinary kind of problems. (Compare Bennie Griessel’s alcoholism.) Virgil Flowers, for instance, has been divorced three times, but loves his dog and his current girlfriend, Frankie Nobles, who is pregnant and suffers from morning sickness. They all, dog included, have Cream of Wheat for breakfast, stirred not shaken. They are Ordinary People.

4. Must Love Dogs. Dogs are the new kids, cute without turning into drug addicts or Trump supporters. Flower’s dog is called Honus and is yellow. Later in the story there is a dog called Pat, who has been locked in a basement for a fortnight, his owner having been shot upstairs. Flowers and the other cops are more concerned about the dog than the dead man: “Well, I can understand shooting somebody,” says one cop, “but why would you do that to a dog?” (Spoiler: Pat is revived and found a good home.) It’s never a good idea to kill a dog in a novel; I did it in my first novel and lost an untold number of readers. (On the other hand, there was Disgrace…)

5. Have sex. Well, as an ingredient. But beware, the kiss-kiss bang-bang of yore is no longer fashionable. They still kiss and bang, but the women are not there mainly because they look good emerging from the ocean in a bikini: they are sensible, hard-headed women with agency. Here, the Lothario is not Virgil Flowers himself (I’m guessing that after ten novels there’s not much more we can find out about him in that department), but the gangly 17-year-old redhead, Skinner, who has “screwed half the women and girls in town”, and is eyeing the other half. But here’s the thing: according to an associate of his, “Skinner really likes women. Not just sex, he likes women. Young women, old women. I’ve seen him bullshitting 90-year-olds… I didn’t say he was screwing them. He likes them and they know it. That’s his whole secret.” Like all good crime novels, then, this one has Handy Hints. And the cops, foul-mouthed though they be, are basically regular guys.

6. Respect the convention that hardbitten cops are actually softies at heart, and most Police Procedurals are sublimated bromances. The cops hide their tender feelings, also from themselves, by ceaselessly abusing each other verbally, and denigrating each other’s sexual prowess or organs. Virgil is routinely referred to by his fellow cops as “Fuckin’ Flowers”. Their preferred term of abuse is Asshole. Go figure, Dr Freud.

7. Have a High Concept, that is, an idea that will sustain interest for the duration of a novel. In this novel, the high concept is the apparition of the Virgin, floating into view during services in the moribund Catholic Church in the moribund town of Pinion, Minnesota (pop. 700), and turning the town into a thriving centre of pilgrimage. Okay, Carl Hiaasen used that concept a while ago, but Sandford puts his own spin on it by having the talented young Skinner bang the Virgin. Also by having somebody apparently pissed off enough about the apparitions to start shooting people, ostensibly at random. Enter Virgil Flowers. The High Concept always triggers action. (Spoiler: in this novel the High Concept is also a Red Herring, another essential ingredient.)

8. Have a plot, preferably one without holes in it. A crime novel without a resolution is a cop-out and a cheat. Spoiler: this novel has a resolution, complete with a distribution of babies (Virgil’s girlfriend is discovered to expect twins). Everybody is accounted for, and even the dogs get a mention. Not quite a bang, but not a whimper either. The novel’s last words are actually “I love you”. That is so old-fashioned, it’s almost post-modern.

10. It helps if you can write. Sandford can.