I don’t know where Bellum came from, back in 1937. But he was a Khoi all right, or a San, or a Khoisan or a Bushperson, I don’t know what you’re supposed to call such ethnicity these days. Like a small skinny jockey with Nelson Mandela eyes, he spoke a sort of Cape Dutch Creole suggesting he perhaps came from Namaqua se wêreld, and he called all pretty girls Nonnie. ‘Nonnie’ is very courteous, see, if curious; it is to call a young woman a nun, and I suppose that goes way back to early Dutch days in the Kolonie, right back to Holland maybe.

Here he earned his crust as freelance gardener among our muscular Zulus, much favoured by housemaids who saw him as some sort of sexual imp who might bring one good luck. His personal favourite was a certain Thoko, nice and plump like those Cro-Magnon Venuses. Haaai! die Thoko, said Bellum, hy’s too lekka, ek eet hom! Seems it was Bellum’s mode of romance to bite his ladies as tomcats do theirs at the moment of truth; it was a symbol of desirability to appear publicly on a Monday morning with his toothmarks all over one’s neck. But I’m not here to talk about Bellum’s love-life, rather his diet, which was kind of Kalahari. 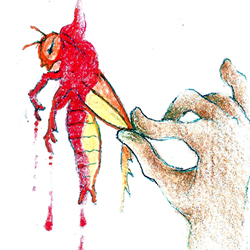 I don’t know where all those locust swarms came from, back in those days, nor where they all went to. They were huge, man, some miles long, and when they passed overhead the sun would noticeably darken as in a partial eclipse, their crap would rain down upon Pietermaritzburg like a monsoon. Then when they’d run out of crap they’d descend and eat every leaf off every plant to make more. And I mean every plant, they’d eat the lawn from under your feet. Bellum would utter strange supplications to make them land, then he’s scoop them up in a bucket and put a plank on top so they couldn’t fly off again and go and light a nice fire in the back yard and cook them and eat them. Just grip them by the jumping legs and shove them in the coals and haul them out with a stick when the wings and things were singed off. Sis! said I. Don’t you even squeeze the crap out first? Nee-e-e! said Bellum, hy’s vir smaak, hy’s net gras. Well I’m squeezing mine out, said I, and did, and you know what, it really wasn’t as tasty as Bell.
Never mind, I fetched the tomato sauce from the fridge, and you know what, he had to agree that mine was now better.

But you know also how family life is, hey; eventually there was a hell of a row over the tomato sauce, every time the locusts came there was none for our school saamies and no sooner had my ma got to buying bigger bottles of the stuff than these disappeared, too, almost instantly because by then the flying-ant season had started. Sis! she yelled, you’ve been in the kitchen again deep-frying your bloody flying-ants in the spaghetti pot! And where’s the new bottle of tomato sauce, you little bugger?

Accusations of antisocial behaviour! But we went off on a nice holiday to Karkloof and things healed up. Bellum, we said, don’t forget to water the lawn and top up the birdbath and clean out Arthur’s cage and feed Kitty and Blackie please like a careful house sitter. Arthur was a budgie named after Arthur Askey who had that song which went Tra-la-la! I’m a budgerigar! and Kitty and Blackie were cat and dog, of course.

East, West, home’s best. Nice to be back. Tum-te-tum, I stroll round the old patch. Suddenly Hey Bellum, I exclaim, where’s the budgie, hey? Nee-e-e, betlak, says Bellum, you forgot to trim his wings, man, and when I went to clean his cage he just flew away, jy weet mos. Sadly I sit down. I suppose he’ll be okay, say I. Ag ja, says Bellum, he is a clever bird, he will eat grass seeds. But a couple of Sundays later I see Bellum off to his Thoko in his Sunday threads, and in his hatband I note a couple of familiar feathers which he has forgotten about. Bellum, say I, you filthy swine, you have eaten Arthur! He can’t deny it, they are Arthur’s feathers. He was very old, says Bellum. You mean it was a mercy killing? say I, you ate him to put him out of his suffering? I suppose you put tomato sauce on him, say I, sarcastically. Nee-e-e, chutney, says Bellum. Mrs Ball’s blatjang. Tomato sauce is for goggas.