Fortunately, nosey ones, I have never been in a car accident, certainly not a fatal one – or I would not be here writing this column now, would I? However if I were to be involved in one (not fatal of course), I would want to be accompanied by this remarkable kid I happened upon in early December. For I know that with him at my side, our chance of surviving would be that much greater.

Wow what a kid! With Christmas day approaching – the only one in the calendar year that sees most people supposedly able to find it in their hearts to be good to their fellow man – I was given that opportunity early by that remarkable kid.

It was one of those lousy days when I found myself rather bored and experiencing an intense case of cabin fever. Cabin fever on a 70-hectare farm, what is wrong with me?

Anyway, I decide to take a drive into town just, well, to take a drive. I normally would not do that because the cost of diesel, which is a killer for any farm, especially at the price of nearly R17 a litre.

Alrighty then… Argh, the diesel cost is voting against the drive, but here comes that inner voice and it’s telling me “Argh man, go for the drive, it will be good for you” and I’m saying, “No way that I’m going to waste diesel”. But the voice insists, “Go for the drive”. 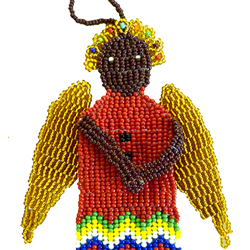 Then I say to the voice: “Look here pal, last night I put a bottle of vodka on ice that I want to start enjoying and I want to do some baking and start putting up the Christmas tree so, “no drive, sorry pal”.

I go to the freezer and pull out the bottle of vodka to pour myself a nice cold straight-up shot. Ah man! It’s a pleasure I gained when I befriended some Russians living in Los Angeles’s West Hollywood Fairfax Road area.

But that voice won’t back off, it says: “Put that away you have plenty of time for that, go for the damn drive.”

I relent – of course not without regret about the diesel I thought I was going to waste. So, as I’m driving along with the Parlotones in the CD player, while saying, “Yeah, this is what I’m talking about – the voice was right to persuade me to go for the drive because right now I’m chillin’ like Bob Dylan”.

Well, as I made my way around a “deadly” curve on this gravel road, my chillin’ would be brought to a sudden halt. And when I say halt, I really mean it – like a cop would stand in front of your oncoming vehicle and command you to stop. I mean, what are you going to do, run the man over?

And, Nosey ones, that is exactly what this kid had done: he’d stood in the middle of the road round a sharp bend. Adding to my shock, he did so while covered with blood that was pouring from several gashes on his head. His face was so dis-figured from the blood that he looked like a character from some scary movie. To my amazement – thus the “remarkable kid” tag – he was calm and collected and said, “Please, Boet Bheki, can you please take me to the hospital. I was in a car accident”.

But here’s the thing, Nosey ones, I don’t see any car. So I ask where the accident happened. Once again, cool calm and collected he says it’s just straight ahead and we have to stop there to pick up my friends who are also hurt.

Now here I am thinking “I’ve got to get this kid to the hospital pronto or else he is in danger of singing Dylan’s Knockin’ on Heaven’s Door.

Nosey ones, this kid is about 10 years old, he had just excaped from a vehicle that rolled over, he is bleeding profusely but yet has the bravery to stop me for assistance in a calm and collected manner. But moreover, he is also concerned about his friends, all four of them.

Yes we have heard stories of kids doing similar amazing things – calling emergency numbers, running to the neighbours for help etc. Trust me, if it was an adult they would have been hysterical and most probably thought only about their own immediate need to get to the hospital.

Not only did that kid bring out the good in me, he affirmed the goodness that exists in all of us simply by demonstrating his concern for his friends.

With the assistance of my farmhand, we carefully loaded the five kids on to my bakkie – very carefully so as not to exacerbate any unseen injuries – and took them to Barberton General.

It’s not too often one gets the opportunity to do good for others. All I can say is, when it comes, seize the moment and the good feeling you get about yourself after such an act is priceless.

That kid made my Christmas. And that inner voice is what we Africans believe is a calling from the ancestors. I mean, how else can I explain the voice insisting that I go out for the drive?