This is the 29th book by Tim Winton, four-time winner of the Miles Franklin Award, twice shortlisted for the Man Booker Prize, fierce environmentalist and Australian National Living Treasure. He loves his native Western Australia, except, to judge by his next-to-last novel Eyrie, Perth. Indeed, the rawer and more remote the better, as far as Winton is concerned, and it doesn’t get any rawer and more remote than the salt flats of this novel.

As in his masterly Breath (recently filmed), the protagonist of this novel is a teenaged boy, one Jaxie Clackton, as foul-mouthed a teenager as ever lived (a worthy descendant of that quintessential boy-on-the-run, Huckleberry Finn), fleeing the consequences of a non-crime he didn’t commit: his brutal father, whom he calls Captain Wankbag, has been crushed by his own ute, owing to a collapsing jack: “And then it was plain as dog’s balls. I didn’t even get down on me knees and check. Maybe I should of to make sure and take some satisfaction from it, but I already knew the old turd was cactus.” (I quote at length to demonstrate Jaxie’s and Winton’s mastery of the vernacular.)

Jaxie shrewdly sur-mises that he will be held responsible for the accident, given what excellent reason he had to wish his father dead: the Captain used to prop up his masculine ego by beating up his now-dead wife and Jaxie himself. The Captain is, indeed, a prime example of the “toxic masculinity” Winton has made it his business to speak up against; and Jaxie, damaged by his proximity to this toxicity, may well be “maturing” into a like brutality: ready to beat up anybody who offends against his fragile ego, casually racist and sexist, accompanying his father on blood-soaked hunting trips, Jaxie seems set fair to turn into a later model of his bestial father. All that can save him is an inarticulate hankering for a better life, represented for him by his cousin Lee, with whom, to the scandal of her mother, he is in love, and to whom he is making his slow and onerous ways across the salt flats of the outback. 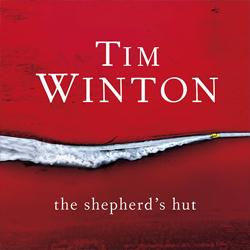 About his mother, whom he remembers with fierce love, Jaxie says: “See, I didn’t know her much at all. With Lee I know everything. But it’s not the same with your mum. She’s there all the time but she’s mostly invisible. It’s only when she’s gone you get that wanting feeling and get curious. Lee wants me to know her. I don’t reckon Mum ever did.”

Winton has been accused of misogyny, because his novels tend to explore the male experience, with the women a somewhat distant, if often inspiring, presence. Whereas the charge of misogyny is manifestly unfair, it is true that here, too, both the mother and Lee remain offstage. Somewhat unexpectedly, “that wanting feeling” finds its focus, very inarticulately and in the face of Jaxie’s extreme prejudice, in the unlikely, enigmatic Irishman  Fintan MacGillis, the inhabitant of the eponymous shepherd’s hut, literally in the middle of nowhere. He, it soon appears, is a disgraced  priest, and Jaxie, no more enlightened in this regard than any other, leaps to the erroneous conclusion that he must be one of the “pedo” priests that have been in the news in Australia as elsewhere.

Forced together by circumstances, the old man and the boy negotiate first a wary truce (Jaxie keeping his gun by his side at all times) and eventually a mutual trust. The old man dresses the boy’s wounds, provides him with food, water and clothing, and seems to discern in him a quality of what in a more overtly religious novel would have been called grace. (The word grace appears only as its antithesis: “Wankbag knocked me down the front steps and said I was a fucking disgrace”.)

“Don’t you understand me, boy, Can’t you see it? Jaxie Clackton, you are an instrument of God.

“Oh, I said. You mad fucker. You been out under the moon too long!

“And we both of us laughed.”

The old priest, the nature of whose misdemeanour we never discover, would seem to be as much in need of salvation as Jaxie, only more consciously so. And if Fintan finds in Jaxie something inexplicably sustaining, Jaxie finds a corresponding warmth of understanding in the old Irishman: “It’s a dangerous feeling getting noticed, being wanted. Getting seen deep and proper, it’s shit hot but terrible too. It’s like being took over.”

In his wonderful 2006 collection of linked short stories, The Turning, Winton explored multiple perspectives on what one could call secular conversion. This novel would seem to be another such, with the disgraced priest as the agent of an unlikely redemption: “He felt me. Always knew what I was. He saw me coming before I knew I was even there. And now I saw him too.”

What they come to share is a response to the strange beauty of the inhospitable landscape; and eventually, in a harrowingly violent denouement, a dependence on each other. And young Jaxie, at last on his way to Lee, can say: “I know what I am now. And peace is on its way. It fucking better be.”

The Shepherd’s Hut is a sparse, haunting, memorable novel, once again proving Winton’s technical brilliance and compassionate quest for the humanity of his wayward characters.