Now then. The annual Jesus Jamboree being over, we must ask ourselves: What have we learned about that Thing called Life?

Well there are Christians and there are Christians. I mean there are those sonsofbitches who bedeck themselves with righteousness as they go about the earth plundering and butchering and shooting their mouths off about the god-given right to freedom, whilst their corporate media keep their populace brain-dead. Bush, Obama and Trump should be dragged off to the Hague and tried for war crimes, that's what.

But hang on. I mean you have to be defeated before you can be put on trial, hey? Like Reichsmarschall Hermann Göring, Luftwaffe Meister. His presence dominated the Nuremburg trials all right. During evidence on crimes against humanity he would interject every now and then with: Where is Bomber Harris? I have kept a seat here for Bomber Harris! Harris was chief of RAF Bomber Command, of course, who killed more civilians than anyone except Hitler himself, only instead of the gas chamber his instrument was the Lancaster bomber. And I remember vividly a movie shown to us whilst training to fly such a thing: the Archbishop of England with Good Book aloft blessing a thousand of them as they went off to wipe out Cologne including its magnificent Gothic cathedral, which I supposed was the House of the Same God as the archbishop's, to cremate alive 40,000 souls from its community. I mean for 100% pure 24-carat hypocrisy you can't beat a good hardline Christian, can you? Thought I. At 18. For that matter, I still think so. 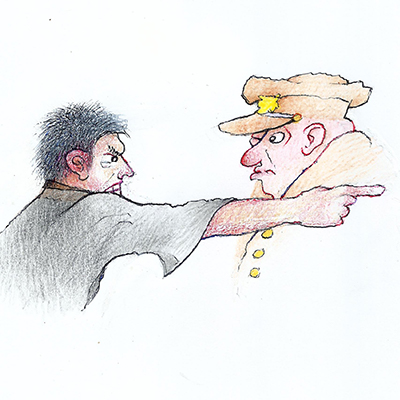 Then again came Father McGuiness, but many years later. I couldn't guess why Father McGuiness should want to see me. Nobody was allowed to see me in Pretoria Central long term prison except my missus for only half an hour every six months. No body contact. Indeed my heart gave a wee leap one Sunday when she was just about due and Bewaarder Gouws clanged open my door and grille and said Trek aan jou baadjie, kom, besoeker. But Bew Gouws didn't take me to the visitors' room where you spoke to your visitor through a thick armourplate glass screen with small holes for sound, he took me to an ordinary cell, empty but for a small prison table and two prison chairs. There stands a small skinny man in priest's black raiment with thick jaggy hair on his head and small smile upon his lips. Bew Gouws stands to one side, according to regulations. Father McGuiness points to the door, according to God. Bew G looks at the crucifix dangling about F McG's breast. Exposing a Catholic crucifix to a Gereformeerde Kerk man is like flashing it at a vampire. Bew G departs.

Tea? says Father McGuiness. Bloody hell, I haven't had tea for two years, but there it stands, a teapotful, help-yourself sugar, a small jug of milk but only one cup. Formal courtesy, this lot, from the Prisons Department to visiting clerics. Would you like to say a prayer? says the father in a thickish IRA accent, if you believe in prayer, then? Never touch the stuff, say I, but I'll bow my head and close my eyes and sip an unlawful cuppa if you need to say one. Thanks, says he, and does that gesture with forehead and sternum and clavicles. Now then, says he when it's done, so what can I do for you? You can tell me what the hell is going on outside, say I, I've been in solitary for 11 months. Aha-a-a-a! says he with some glee, and lays before me a good overview of the entire political scene like he's envisioned it 100 times, and I realise this is one seriously enraged Irishman who finally has found a real, physical, corporeal Satan to attach his hatred to in the name of his God.

After 20 minutes-or-so catharsis sets in and he sighs and leans back and sips his cup of cold tea, and at this point the door slams open, bang! and there stands Kolonel Aucamp, commanding officer, gross, fat, rugby-size. He glares at us gruesomely, the she-wolf of Rome and the Kremlin bear conspiring to overthrow the state before his very eyes in Pretoria's maximum prison! Father McGuinness steps up to his belly and looks silently at Aucamp's face and points at the door. Aucamp thinks hard and briefly, scowls hideously and leaves. F McG sits down to his tea. That got rid of that bastard, says he.

But it didn't, of course. Indeed F McG was never seen again. Aucamp comes to my cell on prison inspection next Sunday. If you try tricks like that again I will take away your food six days, says he, that's regulations, verstaan? says he. Ja Kolonel, 'kse, but he knows I'm laughing at him.

Twitter war about SARS - rogue or right?
It all began with two tweets that Noseweek Editor Martin Welz posted to announce ...
Rogues and hacks
New leaked emails shed light on SARS rogue unit and its allies. Documents leaked to Noseweek ...
Struck-off GP finds new way to exploit elderly
Doctor guilty of unprofessional conduct has developed a profitable alternative speciality; preying on old women. A ...
Senior magistrate's bigoted songsheet
Court officer Ashin Singh sows discord among his peers. A Pietermaritzburg magistrate with a shoot-from the ...
A stink about a stink
Environmental offender given green light in Western Cape. The quiet Boland town of Wellington - ...
Xolobeni: An assault by the state
The assault by the state on the community living at Xolobeni, Mbizana, in the ...
Changing the game
Wits student Kamal Ramburuth-Hurt is driving a campaign to revolutionise the 'irrelevant' economics ...
Too rich to pay rates
Rates crusader strikes at purse of Joburg's elite and powerful. Howick-based property rates crusader Rob McLaren ...
Winds of change: Cyclones threaten Southern Africa's Indian Ocean coast
Powerful tropical cyclones made headlines in 2018. In August, Post-Tropical Cyclone Lane wrought huge damage ...
Artificial intelligence will save humanity, but does anyone care?
Human activity will almost certainly push global temperatures more than 2 degrees beyond pre-industrial ...
The Fourth Industrial Revolution speaks Zulu
I have been writing science stories in Zulu lately. For a bit of fun, I ...
Please give the President a break
Enough is enough! We need to give the President of this here Republic a ...
Tea Party
Now then. The annual Jesus Jamboree being over, we must ask ourselves: What have we ...
Dear Editor
Berea monster must go ♦ Tragedy of lost training colleges ♦ Crippled by statins ♦ ...
Classified ads #231 January 2019
FOREIGN HOLIDAY ACCOMMODATION ♦ LOCAL HOLIDAY ACCOMMODATION ♦ LOCAL PROPERTY FOR SALE ♦ FOR ...
Online Privacy Policy
Last updated: June 11, 2021   This Privacy Policy describes Our policies and procedures on the collection, ...
Terms and Conditions
1. Detailed description of goods and/or services Noseweek is South Africa's only investigative magazine and features ...