Please give the President a break

Enough is enough! We need to give the President of this here Republic a break. It should be quite clear to all that Mzansi has moved towards playing a bigger role in the geopolitical theatre.

Yes, once again we have a temporary non-voting seat in the United Nations Security Council. For those not in the know that is a big deal for any member of this world body. We also have BRICS - you know, our economic formation with Brazil, Russia, India and China - in which we still have to move forward so that the organisation bears fruit.

And of course our president has grabbed the bull by the horns and taken on the worthy but rather monumental task of raising R1 trillion for investment and economic development. Already the man has announced an endeavour of R50 billion towards the same.

But despite that heavy load many of us still have the audacity to demand - not request, but demand - his intervention on matters such as crime. This includes the August 1 #totalshutdown against gender-based violence with women's marches against gender-based violence taking place simultaneous in every major city across South Africa, culminating in delivering a memorandum to President Cyril Ramaphosa.

Oh, please spare us, or rather spare the Pres. We certainly are not some small village whose every problem must be addressed by the chief.

And we are certainly far from a typical Third World country - whatever that means - where the citizenry must always be addressed by the president for every problem.

Another matter on the political side is the EFF. The late American musician Prince sang a song called Raspberry Beret with the chorus:

She wore a Raspberry beret

The kind you find in a second hand store...

What brought these lines to mind were the cries of South Africans reeling from the economic woes we face and particularly the major hit we are taking with the rise of fuel costs. That, as we all know and are feeling has a domino effect on everything from the price of food to the daily commute.

On the subject of commuting, a commentator on a recent television programme said, "The price of going to work has risen so high that we are now working simply to earn money to go to work". Ouch! Talk about the truth hurting.

But wait, isn't there a political party out there called the Economic Freedom Fighters (EFF) who promised to give us economic freedom? Well, yes, the little red berets (as I like to call the party).

What is my beef with the EFF? Well, you said it: we are paying so much for beef one feels as if one is buying a whole cow when you really only wanted a few kgs of steak - at enormous cost.

One has to ask: have the little red berets lost their spark since the ouster of Juju's arch enemy, who had the Republic captured? A friend said it best: "These guys need to learn economics because clearly they have no clue about economics 101". 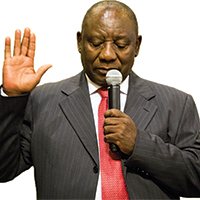 Not too long ago when speaking to my friends and colleagues at the Nose, I gloated over the scarcity of water in Cape Town. Well my dear Nosey Ones, I spoke (or laughed) too soon. It is now the turn of my community to have a water problem. So dire is our predicament that community members have been coming to my farm - I have a borehole - to do their washing and get fresh water for consumption But herein is the problem: they come at night, in the morning, all hours of the day. But at night I'm like: "Guys, please, I have to get some sleep!" Now what is a boy to do? I have to help the community, well, I don't really have a choice otherwise I am in doo-doo.

But I do not understand why are we having a water problem. We are in a rural area surrounded by mountains where water pours from the heavens and gushes down the mountain slopes. Alright then Nosey Ones, I wish you all a Happy New Year. Right now I must harvest mangoes and bring them to the mammas to make achar. Cheers All.