Taxi! The road most travelled

Well I’m told the taxi industry is the most vital in Durbs, excepting perhaps the criminal; we can’t be sure about crime of course since nobody actually knows how much of it there is out there, hey, how can you have statistics about an industry that sets out to be undetectable? So just perhaps crime’s the real number one. Be that as it may, they sure enough make a potent combination, they sure as hell sent tottering our nice old Mynah bus service down here in eThekwini-on-Sea. In the inner city routes until recently you could bank on a bus every 20 minutes, circle left and circle right, and okay, maybe this wasn’t the London Underground where there’s a train every five minutes on certain inner lines, but it was pretty good for a cockeyed kleptocratic dump trying to become a tourist city.

But be of good cheer, dear readers. Good morning, say I to a pallid old crone in King Dinuzulu Road with handbag clutched to her dismal bosom in case of pickpockets, bagsnatchers, muggers and skabengas in general. Do City Hall taxis come this way? say I. She grinds her dentures something horrid. She contorts her skinny lips, revealing grotesque old bakelite gums. She groans: I’m not a girl any more, you know, but here I just have to stand on aching legs until a city hall taxi comes, the bench there is full of natives. Well this being Africa ’twould be passing strange if it were full of Inuit, wouldn’t it? say I. Well Eskimos or Hottentots they’re not going to drive me out of this country and that’s final, I tell you, you needn’t even try to persuade me. Says she. 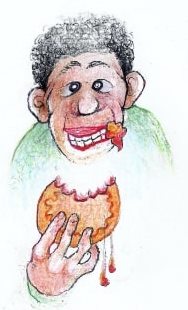 I am rescued by a stuffed-full 14-seat taxi with 20 souls aboard all sweating and exchanging viruses on this 80% humidity morn. Five rands says the conductor. Do you go by the yacht mole? I ask, and bejasus he goes off his route and drops me exactly there.

My favourite concrete block is down at the yacht mole, top of the slipway, a good place for eating saamies and watching the ships. You can watch the ships from the swanky restaurants just over the way, of course, and pay and extra R30 on your delicatessen bill for the privilege, but it’s nicer to have the wind blow your hair about too, which blowing also is for free down at the slipway. But I need a lavvy first. There’s a municipal one nearby; I enter.

There at the wash-hand basin stands a lean young man, half naked and singing a lusty isiZulu song, rubbing his torso and armpits with pink soap and a big old kitchen sponge. Soapy water dribbles on the floor. A couple of security men snooze outside in the sun. There seems to be no insecurity this happy morn, they don’t seem to mind what’s going on inside.

So this is one of your happy days? say I to Lean Young Man. Just a little bit happy so far, says he, but it’s just started. I am making myself nice and clean then I can go and pinch a pie at Pick n Pay for breakfast and I’ll be proper happy. What! say I, and if they catch you? No, he replies, I know the security guard there, he’s my cousin’s lover and he told me where the cameras are; there’s a little place behind the Simba chips rack where I can eat a steak and kidney pie in one minute. But if I’m dirty and untidy PnP staff will notice me, so I soak my clothes in sea water and let them dry flat so they look quite nice for eating pies.

And the soap, say I, do you steal that too? Ja, says he, from the Public Library toilet, but you can’t use it with sea water, it’s just for my body with fresh water.

And how do you get into town? I ask. No, says he, I live here. I look all about; plenty boats, two restaurants and a parking area, but nothing you could call a habitation. He takes me to his sleeping place nearby, just a couple of blocks from the City Hall: shabby sheets of plastic on the branches of a small mangrove patch between the harbour-side railway line and the moored yachts, a long and narrow spit of sea sand next to a fresh stormwater outlet pipe. Small crabs have colonised a wee beach, and a tough beach vine too, it is a mini-ecosystem. A few people sit around, one of them cooking something on a stick over a fire.

We look after each other, says Young Man. I try to conceal my saamies, to give them to him would seem patronising.