Be Merry. Going green for the festive period

Forget about my artificial Xmas tree this festive season; instead I will be decorating one of my dagga trees in celebration of the great gift that the numerous father XMasses of the Constitutional Court have given us with the decriminalisation of the funky weed, albeit only for “private use”.

Now herein is the monumental problem. Limiting this legalisation to only private use is certainly a step forward but a step that nonetheless misses the bigger picture – which is, of course, its commercial opportunities. So, now our lawmakers need to go all the way and just simply fully decriminalise the stuff once and for all.

Most countries of the world have already done so for both the recreational variety and the medicinal.
Now get this, Nosey ones: I am sure that those of you who keep up with current affairs are aware of the reports that Pepsico and Coca-Cola have joined forces to develop a marijuana based drink. Instead of being told to have a coke and a smile we will be told to drink a “spliff” and chill.

So, is there a problem with this? Yes and no. First, no kudos to Pepsico and Coca-Cola for having the foresight to see not only the commercial value here but the medicinal as well. Certainly this beverage should offer better health benefits than their current offerings of caffeine- and sugar-laden Coke and Pepsi.

Second, yes, I have a problem with Pepsico and Coca-Cola developing this drink; well not actuality a problem, rather jealousy instead.

And, mind you, while it is only jealousy I have towards these two soft-drink giants, I do have a monumental problem with our backward African governments, and in particular our lame-ass so-called reps in Parliament. And since we are talking about marijuana, the lame-ass comment most certainly does not apply to the late Inkatha Parliamentarian, Ambrosini – may he rest in peace.

So why do I refer to our parliamentarians as “lame-ass”? Well, for the life of me I have never heard of a parliamentarian lobbying for a particular initiative, except, of course, the late “great” Mario Oriani-Ambrosini. Though I have watched many of the SABC’s Parliament broadcasts; never ever have I seen anything on there, either, of what I long ago concluded our Parliamentarians are worth.

I once brought this up with a former Parliamentarian Chris Gololo (ANC), who hails from Barberton and his response was: “I would love to, but we are constrained by party rules.”

“Not an acceptable answer,” I said, adding, “then lobby the party first”. He laughed and said, “Mi amigo por favor ustedes comprende muy bien este muy difficil” (translation of my bad Spanish – “my friend, please, you understand very well this is very difficult”).

Gololo spent a good deal of his exile years in Cuba and I studied Spanish in the US so we have that  linguistic bond despite the overwhelming respect we have for each other’s contributions in our respective professions. I would say to him, “If only the ANC had more cadres like you” and he would reciprocate: “If only every community had a publishing editor like you.” Oh yeah! just call us the two amigos.

Come to think of it, Gololo would have been the kind of progressive Parliamentarian to lobby for what this column is ultimately about: the full decriminalisation of cannabis.

On second thoughts I don’t think my amigo would have a chance in hell passing it through the party first because I can bet my first-born child that many a man  in the ANC lot would most probably say,  “Rather put your energy into getting us free cigars from the friends you made in Cuba. After all why do you think we sent you there? Don’t forget that you are a comrade first, amigo!” (Soft mumbles heard that he must be getting this marijuana thing from that dreadlocked journalist amigo of his in Barberton). 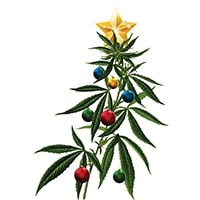 For the record, this dreadlocked journalist does not smoke the spliff, though I did have an interesting experience from getting a “contact high” from the stuff – what the docs would describe as passive smoking. The guitarist in my high school rock band liked to have a toke or two before we hit the stage.

Well, as lead singer and bass player it goes without saying I always had a tough task. We opened with The Police’s hit Roxanne. Unfortunately I couldn’t move beyond the intro which I kept repeating over and over until the drummer threw a stick at my head and yelled, “Hey idiot, move on to the next verse. I couldn’t, I was high as a kite. The next time the guitarist took a toke I stayed as far away as possible. No more contact highs for me. And it is highly unlikely that those who don’t smoke it already will start to do so.

In South Africa we have been consumed with the so-called negative effects of recreational cannabis. We need to throw this mindset out the window and follow the lead of Pepsico and Coca-Cola – and most of the American States along with many other countries.

So, please Parliamentarians, the cannabis crop has tremendous commercial and medicinal value so it’s time to wake up and smell the ganja.