Facts. Redefining the framework of knowledge

The subtitle to Hans Rosling’s book (Ten reasons we are wrong about the world – and why things are better than you think) modestly suggests that “we” are wrong but the rest of the book makes it clear that some people – eg Hans Rosling – are less wrong than others. Thus he recounts, with evident glee, his besting of a Danish journalist in a television interview.

“Once more I explain that ‘poor developing countries’ no longer exist as a distinct group. That there is no gap. Today most people live in middle-income countries… ‘And what do you base that knowledge on?’ continued the journalist in an obvious attempt to be provocative. And he succeeded. I couldn’t help getting irritated and my agitation showed in my voice and my words: ‘I use normal statistics that are compiled by the World Bank and the UN. This is not controversial. The facts are not up for discussion. I am right and you are wrong.” 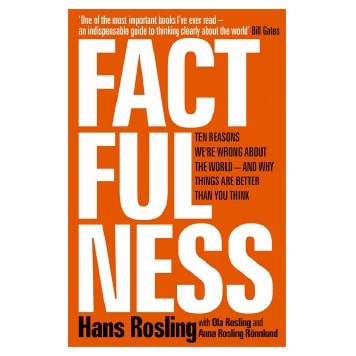 Rosling is here attacking what he calls the “Gap instinct”, which “creates a picture in people’s heads of a world split into two kinds of countries or two kinds of people: rich versus poor.” This instinct is one of the ten that he identifies as lying at the root of our “unfactful” thinking. He proposes, instead of the “gap” model, a more flexible and versatile “four-level framework” based on a daily income of respectively $1, $4, $16 and $64. Armed with a dizzying array of statistics and a series of illustrative charts, he sets out to show that, yes, “things are better than you think”. Statistically “most people live in middle-income countries”, that is, levels 2 and 3 of the 4 levels. (Rosling does, incidentally, concede that in South Africa under apartheid, “The gap story of separate groups was absolutely relevant. But apartheid was very unusual”.)

Rosling’s aim is twofold: firstly, as his subtitle suggests, to convince us that things are better than we might think; but also, crucially, to analyse what habits of mind (the ten instincts) incline us to this dark view of the world. He opens his book with a questionnaire for the reader to test his or her perception of the state of the world. He and his team have subjected nearly 12,000 people in 14 countries, by and large highly skilled and educated people, to these questions: they scored on average two correct answers out of 12. (Your reviewer scored four out of 12.) In other words, we are indeed inclined to see the world as a darker place than in fact (statistically!) it is, and the rest of Rosling’s book is an attempt to explain why this should be so: a lack of “factfulness” in our thinking.

Initially, reading this book, I was reminded of Charles Dickens’s 1854 novel Hard Times, and his satire on what he called “stutterings”. Here is Sissy, the daughter of a circus rider, explaining her “mistakes” in Mr M’Choakumchild’s “fact-based” schoolroom to Louisa Gradgrind:

“Then Mr M’Choakumchild said he would try me again. And he said, ‘This schoolroom is an immense town, and in it there are a million of inhabitants, and only five-and-twenty are starved to death in the streets, in the course of a year. What is your remark on that proportion?’ And my remark was – for I couldn’t think of a better one – that I thought it must be just as hard upon those who were starved, whether the others were a million, or a million million. And that was wrong, too.

“Of course it was.

“Then Mr M’Choakumchild said he would try me once more. And he said, ‘Here are the stutterings’.

Reading Rosling’s book, I found myself thinking, perhaps like Sissy and the Danish journalist, that these no doubt accurate statistics are simply irrelevant to the many millions of people who have not benefited by the undeniable progress in material welfare of so many more other people.

But Hans Rosling is no M’Choakumchild, and he has anticipated that objection: “My guess is you feel that me saying the world is getting better is like me telling you that everything is fine, or that you should look away from those problems and pretend they don’t exist”.

Indeed. Rosling has been a celebrated speaker at high level meetings such as the World Economic Forum at Davos and TED, and it would be easy to dismiss him as the rich people’s darling expert on poverty, telling the Davos crowd that everything is for the best in the best of all possible worlds. But the fact (!) is that Rosling is no ivory-tower statistician: he did train as a statistician, but also as a physician, and was district medical officer in Mozambique for several years. He has dealt at first hand with some of the worst cases of extreme poverty; his thesis is simply “that things can be both bad and better”. Bad as things are, they are better than they were; or, conversely, though things are getting better, they are still pretty bad.

Rosling also acknowledges the limitations of statistics: “The world cannot be understood without numbers. And it cannot be understood with numbers alone.” It would perhaps have been useful if he had more explicitly addressed a non-numerical understanding of the world; but for that he would have had to be a novelist like Dickens. As it stands, this is a sometimes infuriating but always fascinating and thought-provoking book, written in an extremely engaging style. Buy it, test yourself and be humbled.