From another country: Typhoon

The super typhoon American media did not notice.

When my Dad called, at 4am his time, I knew the storm was bad. He was calling from Saipan, part of the US Commonwealth of the Northern Mariana Islands in the western Pacific. The power had been out for nearly 12 hours, the wind was howling, and he couldn’t sleep. He said it felt like the wind was trying to suck him out of the house. 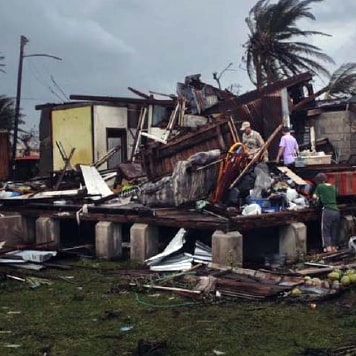 He was calling from a landline – there was no cell service – wanting to know what was going on. As I googled satellite photos, I realised just how bad the situation was, even for a place that’s used to getting slammed by violent weather. I soon learned that this was a supertempest, called Typhoon Yutu, the most powerful storm on earth this year, and the worst in the US since 1935.

The winds tore roofs off homes and levelled concrete power poles. Families huddled together in hallways, closets, and bathrooms to escape falling furniture and flying debris. Concrete walls shook and trees flew through windows. When thousands of people emerged to assess the damage, they saw what looked like a war zone.

Despite the widespread destruction, not a single national news crew was on the ground to document it.
A humanitarian crisis is unfolding: tens of thousands of people are expected to go months without electricity in the islands’ unforgiving heat. “People need to see this,” Adriana Cotero, a local newscaster says. “There needs to be international media attention on this. We’re so far away, people don’t know who we are – it’s sad.”

Juanita Mendiola, a resident of Tinian who hid in her bathroom to survive Yutu, says that the relative lack of coverage is painful. “It feels that we have to do this alone,” she says. “The world is kind of silent.”

Not many people have heard of the Northern Mariana Islands, made up of 14 islands including Saipan and Tinian. The islands – home to the indigenous Chamorro people – are at least a day by plane from the mainland, and flights are expensive. From Tokyo, however, they are only about a three-hour plane ride, which made the islands key battle sites during World War II; the Enola Gay (Boeing B-29 Superfortress bomber) took off from Tinian to bomb Hiroshima. The clear turquoise lagoons are still littered with sunken tanks from the American invasion.

The last territory to join the US – birthright citizenship was established in 1986 – the Northern Mariana Islands got a seat in Congress in 2008, but it’s for a non-voting delegate. People born there are US citizens.

Only 55,000 people live in the Northern Mariana Islands.

“American news organisations tend to treat storms in the Pacific as developing-world disasters – that is to say, newsworthy only when there’s truly overwhelming devastation,” Bruce Shapiro, executive director of the Dart Centre for Journalism and Trauma at Columbia University, explains. Plus, “Most news directors can’t point to the Northern Marianas on a map.” 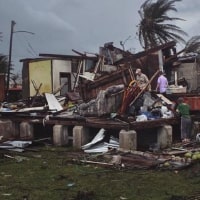 One uninhabited island has been used by the US Navy as a bombing range since 1971; recently, the Navy sought to expand training on more islands. The commonwealth’s national security value has grown with the rise of China and threat of North Korea.

Preparing for and rebounding from large typhoons has become a part of local culture in the Northern Mariana Islands, a rite of passage for every generation. But studies suggest that climate change will continue to bring more frequent and intense storms. “What’s happened to the Marianas will happen again – here and around the world,” Tina Sablan, a candidate for the islands’ legislature, says. “Everyone should be paying attention.”