Pulitzer winning journalist Michiko Kakutani, used to be the chief literary critic for the New York Times, that “failing” purveyor of “fake news”, according to its chief target, Donald Trump. Thus one would not expect a defence of the Rabid Naartjie from Kakutani, and she certainly does not provide one. But nor is this the standard liberal rant against (we can perhaps agree?) the worst American president in history.

Kakutani doesn’t downplay Trump’s many failings – failures of veracity, accountability, empathy, policy, common human decency – but she is less interested in yet another enumeration of the man’s many deviations from even the most rudimentary of human norms, than in the reason why such a person should have come to be the leader of what still likes to regard itself as the greatest nation on earth. Yes, we’ve all read the various analyses, most of them centring on resentment of a Democratic Party elite, in conjunction with the aching discontent of a disinherited white working class – many of us see in the UK’s catastrophic Brexit vote a manifestation of the same discontents. 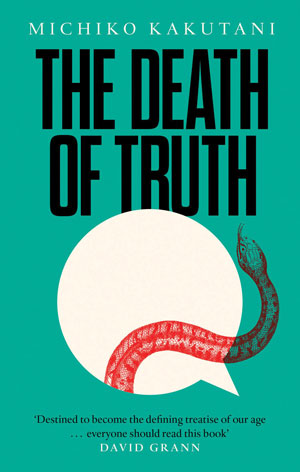 Kakutani doesn’t contest this analysis, but, like the literary critic she is, she is more interested in what we may call the philosophical-intellectual climate that nurtured such a toxic plant. She takes the (relatively) long historical view, and her touchstones are in the early twentieth century: Huxley’s Brave New World, Orwell’s 1984 and other writings, and in particular Hannah Arendt’s reflections on totalitarianism and its enablers. What she finds in all these writers is an emphasis on language, and its deliberate debasement in the totalitarian agenda. She sums up her own agenda in this book: “To examine how a disregard for facts, the displacement of reason by emotion, and the corrosion of language are diminishing the very value of truth, and what that means  for America and the world.” She quotes from Arendt’s 1971 essay, “Lying in Politics”: “The historian knows how vulnerable is the whole texture of facts in which we spend our daily life; it is always in danger of being perforated by single lies or torn to shreds by the organised lying of groups, nations, or classes, or denied and distorted, often carefully covered up by reams of falsehoods or simply allowed to fall into oblivion.”

Seen from this historical perspective, Trump is something more sinister than a grotesque clown who somehow bumbled onto the world stage: he is the avatar of Lenin and Stalin, Mussolini and Hitler, and his methods are startlingly similar to theirs: “authoritarian regimes throughout history have co-opted everyday language in an effort to control not just how people communicate but also how they think.”

Of course, Kakutani doesn’t realistically envisage holocausts and gulags on American soil; but it is sobering to be reminded how many hard-won amenities of civil society have been eroded in a short time under the Trump administration. Trump may not be aiming for world domination – Trump is interested only in Trump – but he is the “useful idiot” of extreme alt-right ideologues like Steve Bannon and Steve Miller. And whereas his mutilation of language may be the instinctive obfuscation of the carnival barker rather than a conscious strategy, behind him, encouraging him and enabling his most extreme deviations from reason and truth, are the alt-right and their various patrons and beneficiaries – the energy lobby, the NRA, not to mention the Russians, out to destabilise and demoralise western democracies.

This is where, according to Kakutani, the age of gobbledygook, Thatcher’s spin doctors  and Reagan’s bluster, meets the age of the internet, with its fake Facebook accounts, its bots, its literally millions of fraudulent posts, aimed at shoring up far-right regimes everywhere and discrediting the liberal opposition. All this is well documented and not particularly controversial (except among Trump supporters, few of whom, even of those who can read, are likely to be reading Kakutani); but where Kakutani may ruffle a few feathers is in her tracing back the death of truth to the abstruse teachings of post-modernism, in particular in its philosophical guise of deconstruction, with its emphasis on the indeterminacy of language and the relativity of truth.

Kakutani takes as her case in point the history of Paul de Man, a leading practitioner of deconstruction, who was revealed after his death (and after a stellar career at Yale) to have been a virulently anti-Semitic Nazi sympathiser in his native Belgium. The most shameful part of this history, according to Kakutani, was that Jacques Derrida, “one of post-modernism’s founding fathers”, and probably the most prominent philosopher of his time, chose to defend De Man, “suggesting that his words actually subverted what they appeared to say or that there was too much ambiguity inherent in his words to assign moral responsibility”.

Thus, weirdly, Jacques Derrida ends up on the same page in history as Donald Trump and Kellyanne Conway and their “alternative facts”. Not, of course, that the Donald or most of his supporters will ever have heard of Derrida; but how many of the Parisian rabble intent on eradicating the aristocrats had ever heard of Jean-Jacques Rousseau? Perhaps, after all, philosophers can change the world – not always for the better, if Kakutani is to be believed.

With your help Noseweek, has WASPs and cellphone service providers that have been stealing our air time with their backs against the wall.

More than 10200 people signed our petition in the first week of Noseweek’s online campaign!

To find out more and add your name go to: