Inside view. Tale wagging the dog

In the early nineties an aspiring young Tasmanian writer called Richard Flanagan was approached to ghost-write the autobiography of the notorious conman John Friedrich, awaiting trial for defrauding banks and other institutions to the amount of nearly $300 million Australian dollars. The emolument would be AUD10,000, the main condition being that the book had to be written in six weeks. Hard-pressed for cash, his wife expecting twins, Flanagan accepted. But in the course of the six weeks, Friedrich committed suicide, and Flanagan had to complete the autobiography on the strength of the very very meagre information he’d managed to glean from Friedrich’s evasive, contradictory narrative. 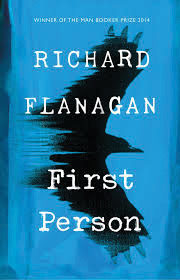 Flanagan completed the autobiography, and went on to publish six very successful novels, the most recent of which, The Narrow Road to the Deep North, won the Man Booker Prize. Now, in First Person, Flanagan gives us the story, in the first person, of an aspiring young Tasmanian writer called, Kif Kehlman, who, in the early nineties, is approached to ghost-write, for a consideration of 10,000 dollars, the autobiography of the notorious conman Siegfried Heidl, awaiting trial for fraud amounting to millions of dollars. Kehlman is reluctant, but his own writing is getting nowhere.

So where does fact stop and fiction start? The question is probably a distraction, in focusing on the origins rather than the actual contents of the novel: best to just get on with reading and judging the book as fiction. Even here, though, the reviewer is faced with origins: it doesn’t take long to discern in Flanagan’s novel the potent influence of Joseph Conrad’s Heart of Darkness. Heidl is Flanagan’s version of Kurtz, the megalomaniac jungle potentate, as observed by the narrator Marlow. As in Flanagan’s novel, Conrad’s narrator is more than a device: he is drawn into the web of deceit and self-deception of his subject, and finds his moral preconceptions, his notions of good and evil, challenged and even destroyed. Both Kurtz and Heidl become representatives of “the horror”, in Conrad’s phrase, underlying what we regard as civilised society – in Conrad, colonialism, in Flanagan, capitalism. A possible additional point of reference is Scott Fitzgerald’s The Great Gatsby. Gatsby, like Kurtz and Heidl, was a self-made ruler of his demesne, in this instance the vapid, heedless, prosperous flapper generation of the 1920s.

All this is to say that Heidl is clearly a representative figure, a product as well as parasite of the world of high finance – with the offshoot of that world, the culture of publishing and television, greedily gorging itself on the sensation value of high crime.

Kif Kehlman is, like Conrad’s Marlow and Fitzgerald’s Nick Carraway, the outsider who is drawn into the vortex of amorality, finding his own moral notions challenged, indeed finding himself becoming Heidl, in becoming a writer. Kif’s best friend, Ray, who is also Heidl’s bodyguard and factotum, says “He’s a bloody funhouse mirror… Look at Heidl long enough and all you can see is yourself.” And Kif himself starts to feel that “The more I invented Heidl on the page, the more the page became Heidl and the more Heidl me – and me the page and the book me and me Heidl.”

Thus Flanagan uses his own experience of writing the autobiography of a conman to explore the relation between the writer and his subject: as Heidl says, quoting his beloved Nietzsche, “And when you look long into the abyss, the abyss also looks into you.” And what Heidl reveals to Kif is the illusory nature of all ideals and morality: “The point of all Heidl’s stories: to make me believe my life was based on illusions – the illusions of goodness, of love, of hope.”

We must assume that it is at this point that Flanagan and Kif part company: where Flanagan went on from his encounter with his subject to become a respected author and a doughty fighter for environmental causes (so controversially so that the Premier of Tasmania has declared “Richard Flanagan and his fictions are not welcome in the New Tasmania”), Kif takes to producing television shows, the perfect medium for Heidl’s rock bottom view of life: “We made rubbish, and, in the Australian way, the more mediocre our work, the more awards and the more praise with which we garlanded ourselves. …TV was the art of turning money into light and light into money.”

Ultimately, Kif comes to share Heidl’s view that “The evidence of the world is that the world is evil.” This is the equivalent of Kurtz’s dying words: ‘The horror! The horror!’ and Kif (Flanagan?)  finds that evil alive and well in his native land: “It was a land not infinitely perfectible, just infinitely corruptible. There was nothing of itself it wouldn’t sell, and always cheaper than last time.”

But if Flanagan is particularly acerbic on the subject of Australia, he extends, in the closing pages of the book, Heidl’s philosophy to the brave new global world of the 21st Century: “He swindled the banks of seven hundred million, but soon enough the world would be swindled by so much more, the racket disarmingly the same taking and making money out of …junk bonds, no doc loans, derivatives… Enron, Lehman Brothers, Northern Rock and Bear Stearns.”

And when Kif says of Heidl, “He contradicted his own lies with fresh lies, and then he contradicted his contradictions,” who does not think of The Most Powerful Man on Earth? At least Heidl had the grace and insight to shoot himself.

Flanagan’s book is a pungent fable for our times, as Heart of Darkness and The Great Gatsby were of theirs. It does not always make for pleasant reading, and in truth may at times be too moralistic in its questioning of morality, but there is no denying its power, or evading Heidl’s uncomfortable question: “Do you think the evidence of the world is that the good are rewarded?” 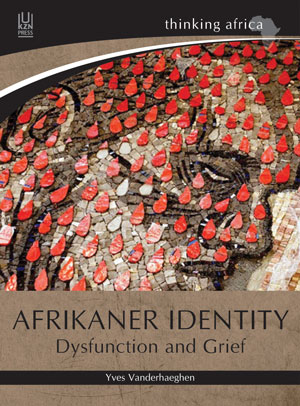 The author, a seasoned journalist (and editor of the KZN-based daily newspaper The Witness), bases his survey of Afrikaner identity on a close analysis of the Afrikaans daily Beeld. His findings are revealing, though perhaps not surprising: given the paper’s generally well-to-do Afrikaans readership, Beeld concentrates overwhelmingly on issues close to the concerns of Afrikaans middle-class people.

Vanderhaeghen sees Afrikaners as “self-othering”, that is, casting themselves as victims of the new dispensation, in defensive reaction against being cast by others as the perpetrators of Apartheid. He uses the concept of “grievability”, which he defines as a matter of “trying to claim a position of legitimacy… through establishing an equivalence of suffering. Othered by dominant social discourse as racists and right-wingers, Afrikaners flip the dynamic around: they are the new ‘other’,  …appropriating the traditional position of minorities around the world. They offer up their dead and maimed to the world to bear witness to their grief…”

To support these necessarily broad generalisations, the author analyses in exhaustive detail the reporting of Beeld from 1 November 2012 to 31 January 2013, that is, a total of 77 editions, in terms mainly of the news and opinion sections, from which “were generated discursive categories of ‘grievable’, which are then interpreted in terms of a prevailing discourse of dysfunction, informed primarily by …crime and disorder.”

Thus Beeld, according to the author, promotes a “grievable” narrative of Afrikanerdom, in which the Afrikaner is the victim of a political dispensation whose dysfunctionality disproportionately disadvantages the white Afrikaners. He shows by numerical analysis how strong the emphasis is on whites as victims: “In Beeld, the life of the Afrikaner subject is presented as vulnerable at every level, that is, ‘othered’ in every aspect of public life.”

He notes, possibly sardonically, that the fate of the rhino becomes, in Beeld’s rendering, metaphoric of the threatened position of the Afrikaner. In general, he finds that stories involving animals outnumber, by 199-to-110, stories “in which a black person was the subject of the story”.

Interestingly, in the light of recent revelations, Vanderhaeghen refers several times to Beeld’s hagiographic obituary, alone among the local media, to General Magnus Malan. It is tempting to speculate whether Beeld was aware of the rumours circulating at the time regarding the General’s paedophilic activities; if so, that would support Vanderhaeghen’s contention that Beeld was intent on counteracting the Afrikaner-as-perpetrator image.

To summarise somewhat baldly a complex argument, Vanderhaeghen suggests that, judging by the editorial practices of Beeld, Afrikaners have retreated into a new laager, not of racial domination, but of self-othering, casting themselves as “grievable” victims rather than perpetrators, rhinos rather than hunters. This is a challenging thesis, and will no doubt be challenged. It is certainly a thought-provoking one.