The South African Police Services (SAPS) and police minister Bheki Cele had been “grossly negligent” in their failure to provide protection for two whistleblowers in the Sindiso Magaqa murder case, which exposed the men to the risk of being assassinated.

The damning allegations are contained in a report by the office of Public Protector Busisiwe Mkhwebane, which has not yet been made public. Noseweek has seen the report, which is signed and dated 10 August 2018 by Mkhwebane. 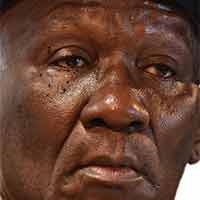 “The failure by the Minister of Police and the SAPS to provide security protection for Messrs Stuta and Zulu exposes them to the risk of being assassinated. It also exposes the SAPS and the South African Government to a risk of unnecessary legal claims and financial losses as their families could decide to claim against government for damages for the loss of lives should they be assassinated,” said the report.

Thabiso Zulu, an ANC member, anti-corruption activist and friend of Magaqa, and Les Stuta, an official at Harry Gwala Municipality, were responsible for blowing the lid on the alleged reasons behind the assassination of Magaqa; a former ANC youth league secretary-general and PR councillor at uMzimkhulu Municipality at the time of his death.

The men went public with the allegations at Magaqa’s widely-broadcast funeral in September last year, telling mourners and high ranking government officials in attendance that Magaqa had discovered multi-million rand corruption within uMzimkhulu Municipality that led to his murder.

Magaqa was shot along with colleagues Nontsikelelo Mafa and Jabu Msiya in the uMzimkhulu area in July 2017 but only died in September 2017 due to “complications from multiple gunshot wounds”.  Mafa and Msiya both survived.

Since Zulu and Stuta first made public the allegations of corruption, they have had to contend with multiple death threats. After approaching the police for assistance and being pushed from pillar to post, Zulu eventually approached the Public Protector.

Mkhwebane wrote to the former minister of police, Fikile Mbalula, and then State Security Agency (SSA) minister, Bongani Bongo, in mid-November 2017, asking them to conduct threat assessments on the whistleblowers.

Both ministers responded within a week, saying the assessments would be undertaken. SAPS eventually assessed Zulu and Stuta in mid-December but, according to her report, Mkhwebane had still not received the assessment.

By this time, both men continued to receive death threats and were checking their movements. Both also believed their calls were being monitored. Zulu took to moving between different locations in the province.

The SSA assessment only took place in April 2018.

Mkhwebane said that she eventually had to write to newly installed police minister Cele in April “after I could not receive any further assistance from the SAPS”, to request security at the state’s expense and to request a meeting.

Mkhwebane also corresponded with newly installed SSA minister, Dipuo Letsatsi-Dube to request a meeting on the same day she wanted to meet with Cele.

Officials from Dipuo Lestsatsi-Dube’s ministry met with Mkhwebane on 19 April and the SSA threat assessment was issued on 11 May.

In the SSA assessment, according to Mkhwebane, it was stated that Zulu and Stuta “urgently require protection from the state”. Furthermore, the assessment recommended that both men “be protected by individual private protectors”.

Mkhwebane’s dealings with the police were not as smooth. While Cele could not meet with her, a letter was sent in April from the office of commissioner Sitole for the “urgent attention” of then acting KZN SAPS provincial commissioner, Bheki Langa, with the SAPS threat assessment attached.

Langa was told to engage with “all relevant stakeholders” including the Public Protector, but according to Mkhwebane, this did not happen.

Mkhwebane again approached Cele’s office, but two proposed dates for meetings did not materialise, one because Mkhwbane was out of the country. “The minister of police thereafter requested the National Commissioner of Police to attend the matter,” says Mkhwebane in her report.

In May, she said, Cele appeared on a radio station and “was of the view that the provision of protection for the two whistleblowers was a competence of the Department of Justice” and denied receiving any correspondence relating to the protection of Zulu and Stuta.

In June, Mkhwebane said she issued a Notice to Cele, “affording him an opportunity to respond to what could be my findings in the matter and to present evidence to me which would persuade me against making findings of undue delay, improper conduct, maladministration and gross negligence which could result in the loss of lives”. Cele did not respond.

The failure on the part of SAPS could have “dire consequences” that had been communicated to the police “on numerous occasions” said Mkhwebane.

“The Minister of Police and the SAPS’s conduct in dealing with my request to provide protection to the two whistle-blowers can only be described as grossly negligent, and a slap in the face to the very people that members of SAPS are employed to protect.”

The conduct by the minister and the police constituted improper conduct “…and undue delay, gross negligence and maladministration” said the report.

Appropriate remedial action, according to Mkhwebane, would entail president Cyril Ramaphosa “reprimanding” Cele “for his lapses in judgment” regarding SAPS failing to provide protection for Zulu and Stuta “after a determination was made that they needed it”.

In order to ensure that such an incident was not repeated, Ramaphosa also needed to ensure that his ministers “take heed of the warnings of this nature to avoid catastrophic results that may occur due to lack of insight and non-action by Members of the Executive who are responsible for various departments and other organs of state”.

Zulu and Stuta would also have to be “provided with the requisite security at state expense”.

Cele was also ordered to, in writing, apologise for the delay in providing security and offer “comprehensive reasons” for the delay in implementing the threat assessments from SAPS and the SSA. That was to be done within seven days of the date of the report.

National police commissioner, Khehla Sitole, was tasked with ensuring SAPS adopted standard operating procedures in dealing with security threat assessments and the timeframes for dealing with such. He also had to ensure that instructions from the minister were implemented without delay.
* This report is part of a series researched and produced with the support of the Taco Kuiper Fund for Investigative Journalism, adminisrered by Wits Journalism.