Johannesburg, 7 August 2018 – Today hundreds of activists from the Treatment Action Campaign (TAC) and Corruption Watch marched to the Gauteng Provincial Legislature to demand that Qedani Mahlangu and Brian Hlongwa be removed from their positions in the ANC, and in the case of Hlongwa, as a MPL and ANC Chief whip in the Gauteng legislature.

Mahlangu and Hlongwa were re-elected to the ANC’s Gauteng Provincial leadership despite being accused of gross negligence in the case of Mahlangu and facilitating rampant corruption in Hlongwa’s case. Both former MEC’s of Health have contributed to the collapse of the Gauteng health system. Under their watch the department has been riddled with pervasive corruption, gross negligence and there has been a dire lack of accountability. The citizen activists demanded that Premier David Makhura take urgent action to ensure accountability for the many lives lost and money squandered from the public purse.

“We are here today because the health system in Gauteng has collapsed,” said TAC Gauteng Chairperson Fikile Mtsweni. “People wait hours or days to access health services. Healthcare workers are overburdened and overstretched to breaking point. Hospitals are in shambles. Patients are found sleeping on corridor floors. Ambulances are scarce and unreliable. The dignity of poor people is being trampled upon every day. The reality is that our peoples’ Constitutional right to healthcare is being violated.” 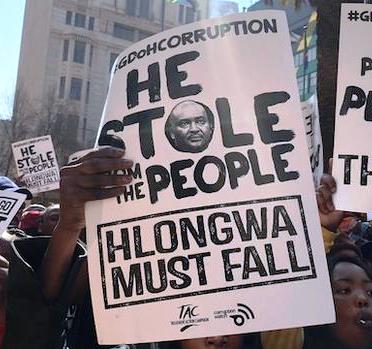 In recent weeks, the media exposed the looting of public funds and resources on a mass scale in the Gauteng health system during Brian Hlongwa’s tenure as MEC for Health. The recently publicised ‘Special Investigating Unit’ report uncovered more than R1.2 billion in unauthorised, irregular, fruitless and wasteful expenditure. TAC and Corruption Watch firmly believe that the current health system collapse is a direct result of the weakening of accountability at that time. Under his leadership, it is evident that a culture of corruption was developed. The consequences of this is death and suffering for poor people.

“The state has a duty to address the conduct of public officials that squander state resources including investigating and prosecuting crimes involving corruption. These officials should be held accountable, not put in senior positions. Certainly not in a case where the actions of the official has resulted in the death of 144 people and the suffering endured by the families of the Life Esidimeni tragedy.”

“We heard how those who had the power to prevent this tragedy washed their hands and tried to evade responsibility, doing the minimum to collect their pay checks. The painful reality is that substantial sums of money were involved and that in many cases the only explanation for some of the implicated NGOs taking in patients that they were not qualified to care for was greed.”

Qedani Mahlangu refused to accept responsibility for causing the worst tragedy this country has witnessed since the dawn of democracy.

Retired Deputy Chief Justice Dikgang Moseneke, who led the alternative dispute resolution hearings into the Life Esidimeni tragedy said of Mahlangu: “As the ultimate leader of the project and member of the executive council‚ she failed to explain why she allowed so many lives of defenceless mental healthcare users to be placed at risk for no good reason.”

The arbitration award handed down by Moseneke required the current MEC of Health Gwen Ramokgopa to produce a turnaround plan within 30 days that would outline how she would improve mental healthcare services in the province. Part of this plan should have included a strategy of engagement with interested parties such as patient groups and civil society. To date this plan has not been published.

The dysfunction in Gauteng is claiming lives and leading to widespread suffering. Former Health MECs Brian Hlongwa and Qedani Mahlangu must be held accountable for their failings. However, instead of facing the consequences of their actions they have been re-elected into new positions. This is an absolute disgrace. It is an affront to the poor people who have suffered and lost their lives at the hands of a failing health system.

“It is commonly agreed that the greatest impediment to fighting corruption is the lack of consequence for the perpetrators”, said Kavisha Pillay, Head of Campaigns and Stakeholder Relations at Corruption Watch. “Here we have one case, that of Brian Hlongwa, whose rampant looting of the health department has been common knowledge for years, now confirmed in graphic detail by the Special Investigating Unit. And a second, Qedani Mahlangu, whose conduct in the Life Esidimeni atrocity smacks of both a breathtaking lack of care and compassion, and also of corruption.”

Mtsweni ended saying “We have had enough of these daily indignities. We demand that they be immediately removed from the ranks of the ANC leadership, and in the case of Brian Hlongwa, as an MPL and ANC Chief whip in the Gauteng legislature. We demand that there be an urgent turnaround of the collapse of the Gauteng health system. If not, we will hold the Premier, and the health department accountable for their indifference to the suffering of poor people, for their foot dragging and empty promises.”

“We await a response from Premier David Makhura from an open letter sent on 17 July 2018. We demand adequate time with Gwen Ramokgopa to discuss the contents of a damning report, produced by TAC into the state of health facilities in her province, sent to her office in May 2018. Are our health and rights worth only an hour of her time?”

“We will not rest until we have an adequate response to all concerns. If the Premier and MEC of Health do not take our demands seriously, we will be back here in our numbers. We will protest in ways you have never seen before in this province. The gloves are coming off. It is time to deliver on your Constitutional mandate, or face the consequences.”

The memorandum is available here:

1. On 28 June 2018 a damning TAC report was published outlining the dysfunction in the Gauteng health system. The report was sent to MEC Gwen Ramokgopa in May 2018. The MEC has since committed to a one hour meeting to discuss the contents of this thorough 19 page report.

2. On 21 June 2018 SECTION27, TAC and Corruption Watch made public a Special Investigating Unit (SIU) report that documents widespread corruption and gross financial misconduct totalling some R1,2 billion in the Gauteng Department of Health (GDH) in the period 2006-2010.