Amy Chua is best known for her 2011 best-seller, Battle Hymn of the Tiger Mother, a highly controversial manifesto of zero-tolerance parenting, Chinese style. As a first generation Chinese American – her parents immigrated from the Philippines – Chua was determined that her two daughters were not going to grow up in the American Way, with TV, play-dates, sleep-overs and suchlike decadent practices. They were offered in exchange – not that there was a no-thank-you option – three hours of music practice a day and an insistence on straight As at school. 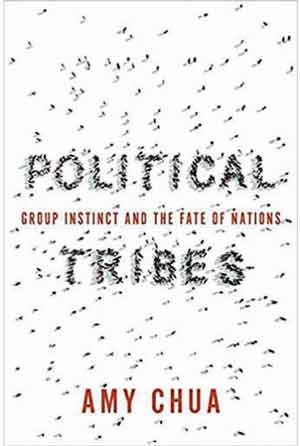 Chua was reviled for what was seen as psychological abuse, but survived the insults and the death threats (and her daughters survived to study at Yale and Harvard respectively), and returned to her other occupation, as Professor of Law at Yale.

This new book has nothing of the tiger mother about it, except perhaps in the stern conviction with which Chua anatomises what she sees as the failures of American foreign policy in particular and societies in general.

In Chua’s view, most or all societies are structured upon – or perilously balanced against – contending tribes, which can be actual tribes, such as the Hutu and Tutsi, or religious groupings, such as the Sunni and Shiite branches of Islam. To this, Chua argues, the US used to be a partial exception, in that traditionally it formed a “super-group”, that is, an American identity transcending tribal loyalties – the famous melting pot: “America was able to elect Barack Obama as president because this country is a super-group, a group in which membership is open to individuals of any background but that at the same time binds its members together with a strong, overarching, group-transcending collective identity.”

Whereas this grouping worked well at home – for a while, at any rate – it proved disastrous in terms of American foreign policy. Chua maintains that all America’s calamitous interventions in foreign countries – Vietnam, Afghanistan, Iraq, Venezuela – were based on the mistaken assumption that what was at issue was an ideological divide (between capitalism and communism, for instance), whereas what was really playing itself out were age-old tribal enmities: “it can be a catastrophic mistake to imagine that through democratic elections, people will suddenly rally around a national identity and overcome their pre-existing ethnic, religious, sectarian and tribal divides.”

Complicating the transition to democracy, such as it is, is often the existence of what she calls a market dominant minority: “an ethnic minority that tends, under market conditions, to dominate economically, often to a startling extent, the poor ‘indigenous’ majority around them, generating enormous resentment among the majority, who see themselves as the rightful owners under threat from ‘greedy’ exploitative outsiders.”

It is not necessary, perhaps, to labour the relevance of this observation to the South African situation, and Chua mentions South Africa only in passing. She anatomises the Vietnamese situation in terms of this model, showing that the US entirely under-estimated the importance of the market-dominant Chinese minority, hated by the indigenous Vietnamese that the Americans thought they were liberating: “In effect, the US-backed regime was asking the South Vietnamese to fight and die – and kill their northern brethren – in order to keep the Chinese rich.” She points out that in South Vietnam a million civilians died and another million were wounded owing mainly to American “friendly fire”.

By Chua’s account, the only thing worse than tribal warfare is American intervention. But what about America’s internal politics under the baleful rule of Donald Trump? Chua sees here, too, the workings of the political tribe. The “supergroup”, she argues, has split into mutually distrustful tribes: “Race has split America’s poor, and class has split America’s whites.”

What Trump has managed to do is to mobilise the discontents of the white tribe into a base: for all that he is immensely more rich than his followers, “Trump, in terms of taste, sensibilities, and values, actually is similar to the white working class. The tribal instinct is all about identification, and Trump’s base identifies with him at a gut level.”

As for the liberal “elite”, they form, according to Chua, a tribe of their own: “what these elites don’t see is how tribal their cosmopolitanism is … There is nothing more tribal than the elite disdain for the provincial, the plebeian, the patriotic.” The Left, moving away from their traditional emphasis on tolerance and inclusion, have become ever more exclusive and intolerant, denying their perceived opponents “platforms” and squabbling among themselves about who is the most politically correct.

Writing of her experience at Yale, Chua says “I have sometimes watched with dismay as a tiny but highly vocal handful of students use their privileged positions not to foster the free exchange of ideas but to shame and punish – almost invariably at no cost to themselves – tearing apart the student community and driving dissenters underground.”

Again South African readers will make their own application of Chua’s contention: we have always been a country of tribes, and she gives us a couple of new tribes to take into account, as we lament the passing of the Rainbow Nation, the super-group that was to have emerged from our fledgling democracy.

It is beyond the scope or competence of this review to take issue with Chua’s arguments. Suffice it to say that it is a highly readable, intensely interesting overview, of extreme relevance to the South African situation.