Not so stupid. Drug wars.

Not so stupid. Making the familiar strange

The eponymous idiot of this book is Selin, a 19-year old Turkish-American freshman at Harvard in the mid-nineties. Given that the author is Turkish-American and was a Harvard freshman in 1995, it seems fair to â€¨assume that much of this novel is autobiographical, though it is difficult to believe she was as clueless as her character. Rather, in spite of the surface correspondences between author and character, this is the author looking back in wry amusement and sometimes embarrassment at her younger self.

Not that Selin is an idiot in the politically incorrect sense of the word: after all, she made it to Harvard. In fact highly intelligent, she simply can’t see the point of much of modern life. Things other people take for granted she finds bizarre, even surreal. “As a novelist you write about social mores,” Batuman has said in an interview, “but not everything can be explained. You want to make the familiar strange and memorable again, and an easy shortcut is to make your protagonist young, clueless and innocent.”

Batuman’s young, clueless protagonist certainly succeeds in making the familiar strange: “At a table near the door, two students were slumped over their books, either asleep or murdered. In a corner, a girl was staring at a stack of flash cards with incredible ferocity, as if she were going to eat them.”

This extract is fairly typical of Batuman’s procedure, or Selin’s mental processes: observing a perfectly normal phenomenon like two students asleep over their books or a girl staring at a stack of cards, she makes it seem surreal and vaguely scary. Life, for Selin, as presumably for Batuman, is full of puzzling but intriguing things. Thus, suffering from a bad cold and desperate for a tissue while being interviewed for a literature seminar, she tries “to determine whether any of the rectangles in my peripheral vision was a box of tissues. Unfortunately, they were all books. The professor was talking about the differences between creative and academic writing. I kept nodding. I was thinking about the structural equivalence between a tissue box and a book: both consisted of slips of white paper in a cardboard case; yet – this was ironic – there was very little functional equivalence, especially if the book wasn’t yours.”

She continues, enunciating what could be taken as the ruling principle of the book: ‘These were the kinds of things I thought about all the time, even though they were neither pleasant nor useful. I had no idea what you were supposed to be thinking about.”

Selin’s deadpan reportage on the things she comes across in her freshman life is at times a devastating critique of academic pretensions. Adopting the wide-eyed gaze of an extra-terrestrial visitor astray among the mysteries of an alien culture, her uncomprehending descriptions are as barbed as they are funny. Having to read as a set text Huysmans’ ultra-decadent aestheticist manifesto, Against Nature, she reports: “I thought maybe Against Nature would be a book about someone who viewed things the way I did – trying to live a life unmarred by laziness, cowardice, and conformity. I was wrong; it was more a book about interior decoration. In his free moments from plumbing the subrational depths of upholstery, the main character devoted himself to …hanging out with a jewel-encrusted tortoise, and thinking thoughts like, ‘All is syphilis.’ How was that an aesthetic life?”

Recalling her mother’s attempts at finding a meaning in a New Yorker short story (Batuman is a staff writer for the New Yorker, and must know that its short stories are notoriously unresolved, not to say pointless), Selin says: “She believed, and I did, too, that every story had a central meaning. You could get that meaning, or you could miss it completely.”

Whether Batuman still believes this is not clear from her novel. This reader, at least, could not discern anything resembling “a central meaning” – unless the sheer randomness of the events, the apparently indiscriminate recording of impressions and thoughts, constitute a central meaning. The plot, what there is of it, concerns Selin’s inconclusive infatuation with a somewhat disconnected young Hungarian mathematician, whom she follows to Hungary, where she teaches English to a series of variously gifted and ungifted students. The relationship goes nowhere, but Selin gets to travel.

Paul Laity, writing in The Guardian, said : “The lack of structure in the second half of The Idiot deliberately mirrors Selin’s lack of control over her own narrative. A decade ago, Batuman wrote a polemic against the crafted, controlled fiction that was coming out of creative writing courses. Literature, she insisted, should encompass “all the irrelevant garbage” of life. “American writers, break out of the jail!” the essay concluded: “Write long novels, pointless novels.”

So: if this novel seems long and pointless, that’s the way the author wanted it; and if the events and thoughts recorded here seem like “irrelevant garbage”, that too, is as it should be. But Batuman did not add, as she could have: But make sure that the reader remains interested. And, perhaps oddly, The Idiot does keep one’s interest, more often than not by the sheer hilarious absurdity of it all. As I should perhaps have made more of earlier, for all its naïve solemnity, this is a very funny book, as only a very intelligent novelist can write about an idiot. - Michiel Heyns

Drug wars. Sanity at a price

The drugs that changed our minds: 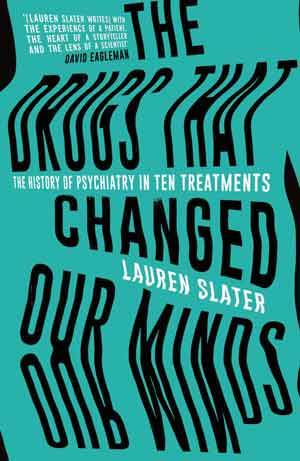 A History of Psychiatry in ten treatments

Psychologist and writer Lauren Slater’s history of psychiatry is an account of psychological redemption and its shadow. She weaves the warp of her account of her own journey out of bipolar disorder – taking a succession of drugs – into the weft of the history of medical science’s attempt to deal with mental disorders. It’s a very mixed picture; one that leaves the impression that there are no magic bullets in treating the mind, and that psychiatry remains a dark art.

She acknowledges that psychiatric drugs have healed her and allowed her to lead the productive life she has – earning a PhD in psychology and becoming a writer. But the cost has been hefty: “Psychiatric drugs have taken my life and health and ruined me, drawing death near,” says 55-year-old Slater. The direct side effects of 35 years of popping pills – a dozen different ones, because their efficacy tends to wear off over time – are, among them, memory loss, obesity, kidney disease, diabetes and open sores on her feet.

Combining science, history and story-telling she traces the evolution of psychiatric medicine through the development of ten treatments, starting with chlorpromazine, the dye methylene blue that – by accident,  after various iterations – was found in 1899 to calm manic and psychotic patients in an Italian asylum.

The history she traces appears to be very much a hit and miss affair. According to Slater, despite their sciencey sounding explanations of how drugs work on the mind, researchers still don’t fully understand their action and often pills are prescribed for conditions other than those for which they have been approved.

She argues that frequently the drugs have come first and the conditions being treated are then simply defined in relation to the effect a drug has. The diagnosis of mental illness is notoriously slippery – there are no blood tests for depression,  schizophrenia or attention deficit disorder, making labelling a subjective enterprise.

In the 1950s a researcher at Roche Laboratories discovered that the TB drug iproniazid had mood-altering side-effects and proposed to his uninterested bosses at Roche that it could be marketed as a  “psychic energiser”. In the end it did go to market – as one of the first of what are now known as anti-depressants.

“Would we have been as quick to pathologise depression – if the tablets to treat it didn’t suggest sickness?” asks Slater. “A psychic energiser is Everyman’s medication, while an antidepressant seems destined for the sickest of souls.”

Slater raises many pertinent questions about the state of psychiatry and the role of Big Pharma in pushing drugs that are often the most profitable, but not the most effective. Conversely, she concludes on a hopeful note, looking at a renewal of interest in psychedelics such as LSD, psilocybin (magic mushrooms) and MDMA (ecstacy), which were outlawed because of their associations with 1960s counter-culture, but are showing great promise in early trials for treating, amongst others,  depression and post-traumatic stress. – Tony Pinchuck