This month, when Noseweek celebrates its 25th anniversary, I feel entitled to be a bit sentimental; to remember those early days when most of our subscribers were friends – or soon became friends; when we now and then stuffed magazines into envelopes for posting at the kitchen table. 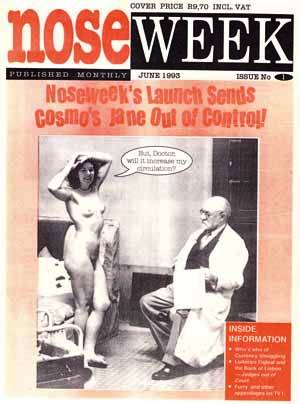 Publication was erratic for the first few years, particularly when the lying millionaire dentist from Pennsylvania, Dr  Robert Hall, kept us distracted by suing us for a million for humorously revealing the truth about his life of ill-funded fakery. (He lost the case after two years of preparation and a seven- week high court trial, and some some mysterikous offshore trusts paid the R2 million in legal costs he was ordered to pay. MHDSRIP.)

The inspiration we derived from the UK’s Private Eye was most obvious in our first 40 issues when our covers, in imitation of theirs, were satirical. Shortly before the first Noseweek appeared, Jane Raphaely,  founding editor of South Africa’s then most popular women’s magazine, Fairlady,  decided to see how many male readers she could recruit by placing a picture of Madonna, dressed only in a few leather straps, on her cover. It was a huge success.

Inspired by her success, Issue One of Noseweek went on sale with Jane’s head (and pearls) Photoshopped on to the full-frontal nude body of a famous French artist’s model posing for the more famous, earnestly studious-looking artist, Matisse. In a bubble she asked “But doctor, will it improve my circulation?”  It did ours. 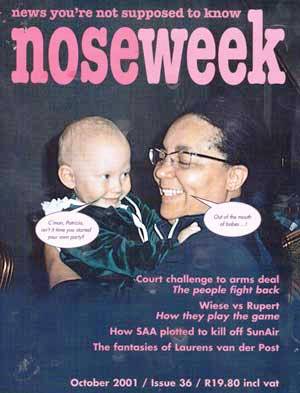 Another had then DA leader Tony Leon, on a visit to the Sotho homeland, echoing John F Kennedy’s famous Berlin speech. Leon's bubble read “Ich bin ein Quaqua”, unexpectedly on point now, considering the latest newsworthy controversy about racist labelling.  On the cover of nose36 we had friend Patricia de Lille clutching my then still infant daughter, cutely asking her: “Isn’t it time you started your own party?”  Hullo-o.

But our content was not satirical, which was a problem: too many South Africans did/ still do not understand satire; they missed the joke and took our covers literally, then to accuse us of purveying  fake news. Those who did get the satire, promptly decided that the outrageously true stories we carried inside the magazine were mere satire too, only written for the laughs.

Most prescient of all from those early stories was the lead in Issue One, which revealed how millionaire Sea Point property speculator Norman Benjamin, a small man with a quaintly folksy manner of speech, coupled with a touch of Yiddish humour, lost a couple of million on an offshore scheme that some shady German businessmen persuaded him would assist him in getting a few tax-free millions, undetected, to his “poor daughter Rosemary” in Texas.

After getting reassuring legal advice from two of South Africa’s largest law firms, Sonnenbergs (now Edward Nathan Sonnenbergs, also known as ENS) and Werksmans, he signed up for the elaborate offshore structure and hidden contracts. But all that good legal advice did not protect him from being fleeced of everything by his German partners. Undeterred by what the SA authorities might do when they learned of the scheme, he issued summons against Sonnenbergs and told all in the Cape Town high court. Nobody noticed – until a year later when Noseweek reported it, quoting verbatim from the court transcripts and court records assembled from three continents, the scheme having been so devised that the tax and exchange control authorities in any one country could not get to see the full picture.

Norman's quaint, sometimes outrageous, manner of speech was so entertaining that when quoted verbatim, many readers assumed it was us being satirical; a send-up. The men from Sonnenbergs and Werksmans took the gap and laughingly told their friends and clients how amusing they found the satire in South Africa’s latest magazine.

The only one who was not amused was por Rosemary in Texas. She telephoned from Texas, demanding to know what I held against her. Had we been at school together? Had she perhaps done something to offend me at school? I was still trying to work out what this was all about – I had never set eyes on Rosemary – when, clearly deeply insulted, she shrieked the answer: “I. Am. Not. Poor!”

I had to explain to her that it was her caring father who had spun the men at the Reserve Bank that story in an effort to persuade them to be indulgent of his wrongdoing. They were.

Eventually we got the message: sadly no more satirical covers.

Today, 25 years later, Norman Benjamin’s story is eerily echoed in our story on page 12, although there is nothing amusing to be found in the Brakspear’s story of Nedbank’s offshore chicanery; of how Nedbank assisted by its lawyers – yes, the same Sonnenbergs – has lied and cheated them out of everything; “We have not only lost all we owned, but also ten years of our lives,” says heroic 84-year old widow Dorothy Brakspear, representing herself in the Jersey court as she’s unable to afford legal assistance. –  The Editor

Has Cele got the stomach to clean up KZN killing fields?

Many are pinning their hopes for an end to the political violence in KwaZulu-Natal on the much-anticipated final report of the Moerane Commission of Inquiry. Noseweek isn’t sure why.

The commission heard testimony from over 60 witnesses and finished its work in March, but in a move – which one rights group told Noseweek was “sheer arrogance” – has to date refused to release transcripts of witness testimony to the media or to those who testified. The commission says it is too early do so as it may endanger witnesses. It didn’t explain how, by giving transcripts of their own public testimonies back to witnesses, it would endanger the lives of those witnesses.

“I want the transcript of my testimony so that I can check the commission’s version. What if something was incorrectly transcribed? Are we supposed to just trust what the commission says?” one witness told Noseweek.

It is unclear whether the final report will be made public and if so, whether a sanitised version will be released instead of the verbatim report? Either way, placing one’s hopes in the Moerane Commission is sure to leave many disappointed.

Thabiso Zulu, an outspoken ANC activist and a self-styled corruption-buster who testified, told Noseweek he hoped the premier had “read the public mood” and would release the report. “If they don’t release it, we have our lawyers on standby to demand its release through the courts.”

Zulu also said that the killers who are mowing down primarily ANC members “are known” and that “most senior politicians know there are four bosses of hitmen in KZN” – three in the taxi industry and one in private security.

Many others have said the same thing. The names of those alleged to have solicited hits are screamed at funerals and in private meetings.

Plan B, then, for getting to the root of the killings must lie with new police minister Bheki Cele. Tough and committed, Cele has been lauded for making Lieutenant-General Nhlanhla Sibusiso Mkhwanazi the province’s new acting police commissioner.

A permanent appointment cannot be made until SAPS eventually manages to boot out Lieutenant General Mmamonnye Ngobeni, who is alleged to have a close relationship with controversial Durban businessman and Jacob Zuma benefactor, Thoshan Panday. She is accused of having interfered with an investigation into Panday, who was suspected of being involved in a multi-million-rand tender to provide accommodation for the police in Durban for the 2010 Fifa World Cup.

It does help that Cele hails from the province and, unlike his predecessor Fikile Mbalula, prefers actual police work to the dangerous streets of Twitter.

Cele has the respect of SAPS even though, as commissioner, he was fired for corruption six years ago. Whether that was genuine graft or a set-up remains irrelevant to many. He is trusted on the ground, where it matters. Cele has a better understanding of the province and in particular its taxi underworld – a root cause of much of the violence.

President Cyril Ramaphosa has identified KwaZulu-Natal as a threat to national security and has set up an inter-ministerial committee to address political killings. Cele heads the committee and is joined by the ministers of State Security, Justice and Correctional Services and Defence and Military Veterans. If needs be and as a last resort, Cele can call on the army.

The inter-ministerial committee now joins legions of other special units and task teams and intra-political committees which to date have managed to do nothing at all to curb the murders.

And if, as Thabiso Zulu and countless others who have spoken to Noseweek allege, this is because senior ANC KZN members and police themselves are implicated, one can understand the lack of movement. There is little doubt that those pulling the bloody strings on hits can be found. Noseweek has been supplied with names, as have the police.

After all the other failures, will Cele have the stomach to send men in to the ANC offices, or the offices of MECs or the homes of MK vets, or taxi bosses, or municipal chambers to actually effect arrests – and open up a tangled, embarrassing mess to end KZN’s  history of violence as a political solution? Right now that’s the big question. - Jonathan Erasmus