Go on Mamas. Make my day!

All you unathletes out there, it may interest you to know that many of the marathon events these days include also a 10km fun-run for one’s family, so they don’t feel left out. That doesn’t mean they have to run, of course, they can walk if they fade along the way. Stroll. It’s all for the companionship, you see; we-e-ell, the Comradeship, on a small scale. The serious club runners blast off first, see, so the kids and cripples and geriatrics don’t get under their feet. I qualify for the fun run on two counts: Cripple and Geriatric. 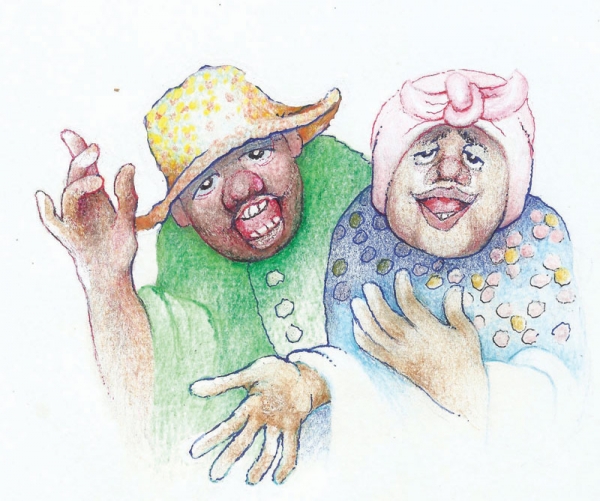 What happened to me when I was only 85 was real Mad German Scientist stuff, I tell you: to dig veins from my legs and plant them in my heart. I mean next thing you know is they’ll be extracting DNA mysteries from one’s genitalia and grafting them to one’s sensibilities. Why, I recently met a crumpled up old Emeritus Professor of Something who said to me he felt okay about being all crumpled up and ready for the hereafter because he had humped 200 women in his lifetime and how’s that hey? And how I thought was, hey this ou has got his dick diced up by some psychopath sangoma somewhere and stuck in his skull.

Well anyway, here I am 92 and all healed up, my flesh knitted together like an old jersey, and one day I suddenly feel it’s a matter of dignity that I should declare myself yet nimble and young of spirit. I should now go into training for the Sardine Run Half Marathon. Well, that bit of it as described, and strolling.

I put on my old stink-tekkies and sally forth, with careful sitting down wherever there’s a flat place, taking it easy, bit by bit. And the first such place I come across is a long low wooden bench outside a supermarket with a little notice saying these seats are for the comfort of seniorburgers, like I’m an old piece of mincemeat twixt bits of bun. Which indeed I am, in a manner of speaking.

I sit down next to two fat old Zulu mamas. After a bit mama number one raises a forefinger and starts marking a slow time, and both start to sing, softly and oh so delicately. They modulate their voices, each counterpoint to the other; it is very gentle singing in the coarse world of electronic gadoomp! mass music. After five minutes or so they stop and wave at the world and I say That was a lovely song. You think so? says Mama One, she smiles sweetly and takes my hand and makes like a little apple pie between hers. We have an English song too, for you, says she. She whispers to Mama Two and they sing: Greensleeves. They sing it as Henry VIII would have sung it, with perfect thirds and fifths. Clearly they learned their singing somewhere without a piano, which has perfect octaves and all in between sli-i-ightly sharp or sli-i-ightly flat. I quite suddenly realise it is this that gives Zulu singing its wistful nature. Its nostalgia.

That song was written by the King of England, say I, and you sang it as he would have sung it, very beautifully. You mean the Queen? says Mama Two. No, the King, called Henry, in 1550, say I. Wew! say both mamas in unison, so old! Yes, say I, and still lovely and fresh. Where did you learn your singing? In Nongoma at a mission school, says Mama Two. No piano? say I. No, just a guitar, says she. I rise to go, shake hands and bow. You have made my day, say I. And you have made us too heppy! they say, in unison.

Out on the street I briskly take off, the sun shines upon me, man, but I exercise restraint and discipline and watch out for the next resting spot. And there it is, a concrete bench ’neath a great shady uMkhuhlu, a decommissioned bus stop, and there sits Doctor Felicity Groats, sociologist, Commentator on All of Life.

Hullo ducky, say I, and how’s the world treating you today? How long do we have to submit to this? says she. Submit to what? say I. Everything, the country is failing before our eyes, there are no excuses, says she, I’ve been sitting here half an hour and the bus just doesn’t come. Everything is failing. Well why don’t you take a taxi? say I. What? And catch a filthy disease? says she.

We’re stuck with this government, says she, voting means nothing any more. See for yourself, you can go to any polling station and witness the corruption before your very eyes. Ja, say I, it’s a bugger, isn’t it? Excuse me, please, I’m training for the Comrades Marathon, and it’s such a relief to get away from the old cow I find myself actually running. The sun still shines upon me, my day has been made.

The Crocodile's QwaQwa kerfuffle
Cadiz chairman calls Investec CEO a thief and QwaQwa k****r for allegedly misappropriating shares ...
Artificial intelligence. Robot racism
There is something rather democratic about the robot called Bender (from the TV show Futurama) ...
Dirty tricks to discredit me, says key witness against Zuma
Forensic auditor claims that despite KPMG apology there is good evidence that SARS rogue unit ...
Who Spilged the beans?
The proceedings in Court 17 of the South Gauteng High Court in Johannesburg on 4 ...
If it smells of state capture...
Be careful who you work for. It took me almost four months, and two ...
When the ANC's monopoly goes
South Africa’s political system is designed for coalition government, argues political analyst Leon Schreiber in ...
Dirty secret behind Norway's clean energy
The happiest and most democratic country in the world funds its very green power ...
Dear Editor:
The SARS ‘naughty list’ ♦ Gwen Ngwenya: bitter truth ♦ Africa’s Unesco City of Literature ...
Love in three parts. No happy endings
THE ONLY STORY by Julian Barnes (Jonathan Cape) ...
Journey. Where are you going?
Boy oh boy! How Mzansi people love these ridiculous phrases that seem to pop ...
Berlin and beyond. Broken promised lands
Berlin in late April, sunny in a wintry way, a spritz of rain, a South ...
Go on Mamas. Make my day!
All you unathletes out there, it may interest you to know that many of ...
Classified ads #224 June 2018
FOREIGN HOLIDAY ACCOMMODATION ♦ LOCAL HOLIDAY ACCOMMODATION ♦ LOCAL PROPERTY FOR ...
Breaking News (14 June 2018) ‘Frankel 8’ obtain landmark ConCourt judgement
If he were still alive, stockbroker Sidney Frankel - accused of being a paedophile - ...