The Square Kilometre Array (SKA) is one of the world’s biggest science projects and South Africa has a huge part in it. There have been spinoff projects like the MeerKAT radio telescope, that are putting South Africa on the world map in astronomy and science in general. 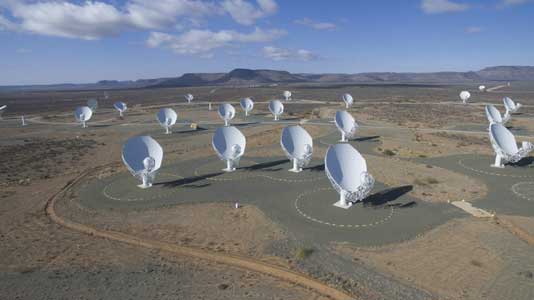 As a taxpayer you may find yourself asking why you should pay for a project that seems to have no immediate benefits, unlike perhaps urban infrastructure or feeding the hungry. The same question was asked of the American space programme that put a man on the moon, which I personally think is awesome in its own right, but it also gave us useful things like GPS and the memory foam in your takkies.

Nishana Bhogal of the University of Cape Town has penned a research article, “The role of the Square Kilometre Array in South Africa’s economic development strategy” in the South African Journal of Science, March 2018. In it she shows how South Africa has positioned itself for economic development by moving away from a land- and resource-based economy into a knowledge-driven one as a way of looking into the future.

I’ve attended quite a few science conferences and I’ve noticed that researchers with projects given government grant money usually present easily digestible results on their “Projected Benefits” slide, such as jobs and sponsored students. I think it ill-advised to apply the same logic to the SKA project, assessing its merits in terms of number of jobs created, number of research papers published, uplifting the community, and other easily digestible outcomes.

What is more important is the quality of the science that will be done with the telescope and other projects related to it.

With just 16 out of planned 64 dishes built, the MeerKAT telescope situated in the Karoo near the sleepy town of Carnarvon has already produced radio images of spectacular detail – something I saw when attending the official launch of the dishes by Naledi Pandor in 2016. While they might look similar to your rusted DStv dish, each of these receivers stands at almost 20 metres and weighs 42 tonnes.

Bhogal notes that if quality is ignored, we will have below-par scientists who publish a lot but cannot really compete with the quality being turned out by the rest of the world. The paper suggests that we need to focus on the progress of the SKA-sponsored students: where they are and how many are employed. I wrote a story on one such promising student, Janathon de Klerk, from one of the local schools near the telescope, and she has gone on to get distinctions in her BSc Mathematics and Physics degree at the University of the Free State.

Perhaps more importantly, she says, we need to look at and assess the reach and impact of the data obtained using the MeerKAT and SKA telescopes. An important question to consider is how many of the great number of research projects derived from this data are led by South African scientists.

I found it refreshing that Bhogal says South Africa is focusing its efforts and money into making use of competitive advantages the country has, such as a geography that is ideally suited to radio astronomy. Radio telescopes work best as a network and the nodes of this global network have missed southern Africa so far; now, on account of the two oceans we find ourselves between, South Africa is a perfect place to add a node to open up the skies further.

So, this is one of the main reasons for the South African government pitting our hopes of a lucrative knowledge economy based on radio astronomy, writes Bhogal.

She concluded that the SKA SA project will contribute significantly to the country’s efforts to grow such a knowledge economy. But it is still early days; more research is needed to better gauge the project’s impact. With the science that is going to be done there it is almost like a new belt of gold or diamonds has popped up in the Karoo, ready to be mined and drive the economy forward.

The SKA SA project has received a lot of attention in the media, but it is but one of the many science projects that is benefiting from public funding in the country.

In a lot of the work I do, I am increasingly noting that conditions are set for institutions to produce results that will directly, and immediately benefit local communities.

While this is a noble cause, I do not believe that it should be a driving factor for the public funding of science; sometimes knowledge produced from hard science doesn’t become useful for many years – even some of the greatest discoveries of the 20th century were the by-products of well-funded research.